Today we’re finishing up our look at the second wave of Nexo Knights sets. Check out the previous reviews here. The remaining sets are the two big sets in the Nexo Knights theme, 70322: Axl’s Tower Carrier and 70321: General Magmar’s Siege Machine of Doom. 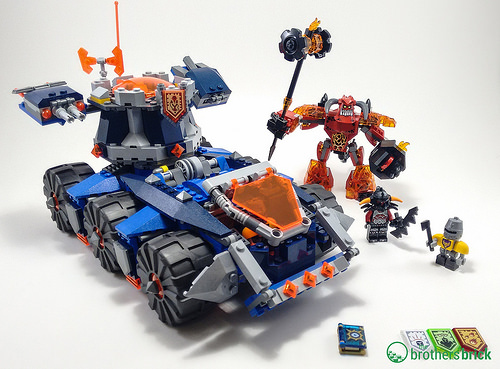 As the largest good guy set in the second wave of the Nexo Knights theme, Axl’s Tower Carrier has a lot to live up to, competing with the superb 70317: The Fortrex from the previous wave. As is the case with many of the Nexo Knights sets, this vehicle is a rather strange concept. Where The Fortrex was a moving castle, this “tower carrier” is a moving turret on steroids. 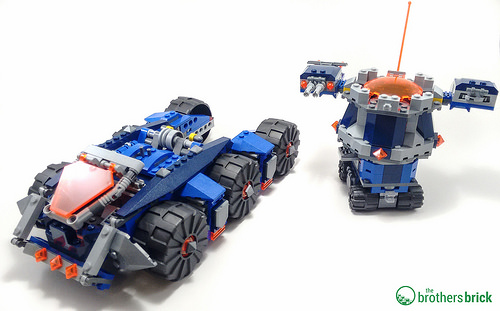 The “tower” itself is actually a detachable vehicle from the main build, so let’s talk about it first.  LEGO has done comedically scaled vehicles in the past, but this stout tower with itty bitty wheels and random weapon add ons just looks strange and out of place. 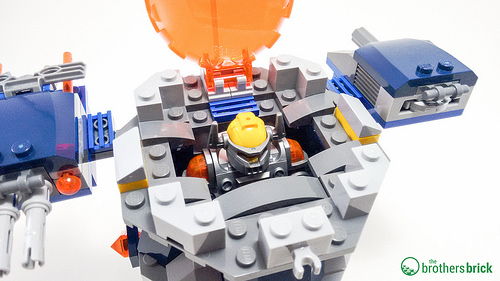 Deep within the middle of the admittedly brilliant build of the main tower there is a cockpit for Axl himself. It’s big enough to fit this large figure easily, though sliding him in through the top is a delicate process. Once he’s in you close the new dome piece — which really works nicely here due to the cylindrical nature of the tower itself.

On either side you’ll find a pair of working launcher weapons. The right is a bolt launcher and the left fires discs. The bolt launcher has a great build here, using a single tank tread piece as the firing mechanism to launch both bolts at the same time. These work pretty well in conjunction with the tower swiveling. Around the back there are clips for Axl’s axe and anything else you’d like, as well as a removable chest that is held in place with an antenna piece. It’s a rather strange standalone vehicle, and while it definitely plays second fiddle to the main build, it’s still pretty fun. 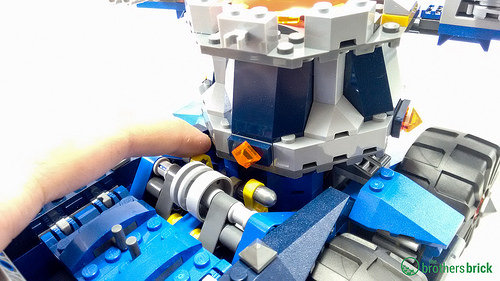 That main build is a massive six-wheeled vehicle. At the back there is a massive slot for the tower to fit into. The tower secures well enough and can be launched off with a lever. This can cause a problem however, as pushing the tower into the cavity causes the tower to lift off its wheels. Release it too fast and the tower will topple over, which looks decidedly unimpressive in the heat of battle.

Unlike a lot of other multi-part vehicles that LEGO designs, this one actually has a way to fill up the empty space when the tower has been removed. Open up a few flaps and a full catapult will fold out, ready to launch included 2X2 round bricks at the enemy. 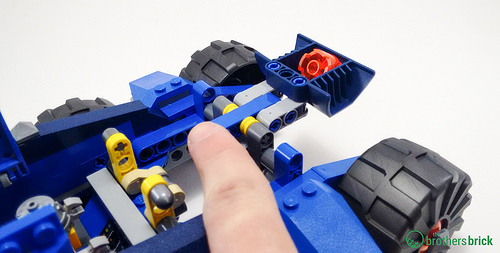 In the middle of the vehicle there is a hollow space where the catapult will lay dormant until the tower is ejected. Once the catapult is operational, however, there’s space for the included robots (the Axlbots) to operate a cockpit. There’s also two jumper pieces to hold the catapult ammo. Right at the vehicle front there is a unique cockpit built for an Axlebot. The cockpit is based around a transparent trans neon orange recolour of the popular large flag piece. Here the flag acts as a windshield surrounded with a Technic build frame. While this looks great on display, the windscreen will regularly detach itself thanks to being secured in with only four hollow studs. Continuing the great shaping is a giant ramming bar that fits over the entire front section. While it isn’t suggested by LEGO, you could move it up and down as a makeshift bulldozer blade. 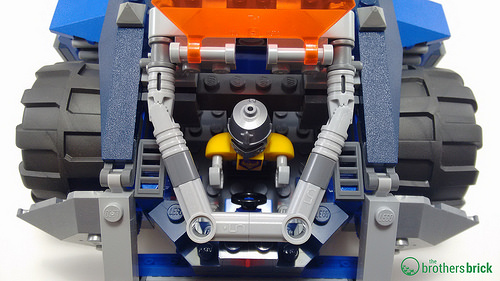 The best view of this build is at a low level, where it looks mean with a low center of gravity. The very large tires pieces are blended into the body thanks to some angled plates which separate them. These aren’t just for show, however, as they are hinged and hidden beneath them is the Axlbots’ weapons and tools. In play, this set is superb. Roaming around with the massive wheels (which spin flawlessly) is a lot of fun and the transforming feature of the catapult adds a lot to the experience. 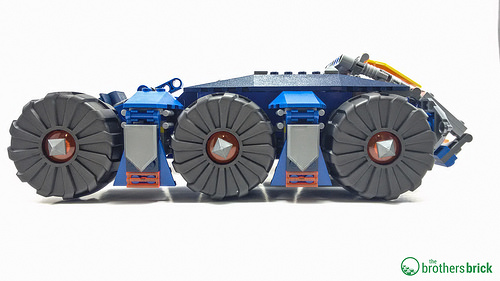 Of course, the set also comes with a bad guy, Burnzie. While bigger than Axl and slightly bigger than the other monsters (like Sparkks, who came in 70316: Jestro’s Evil Mobile), it uses a moderate amount of pieces to create something great. 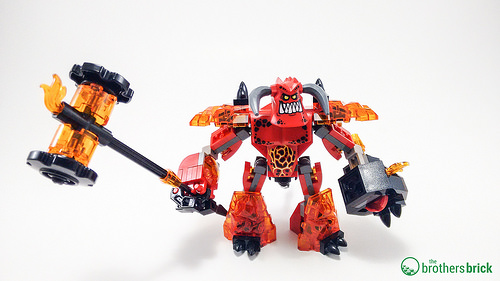 Like Sparkks, the build is centered on a nicely printed special torso piece that is topped with a peg for a minifigure head. Another unique piece is the head itself which, again, has fantastic printing. As a figure, this is great for display and play thanks to the oversized weapons and a disc launcher in the left arm. I really, really love Burnzie and hope he’s included in some smaller sets in the future.

Lastly, the minifigures. The good guys are comprised of Axl and two of his Axlbots. Currently this is the cheapest way to get the Axl figure (if you don’t count the recoloured version in 70336: Ultimate Axl) even thought I’d still suggest you wait for a smaller set if all you want is this guy. The two Axlbots come with unique bright light orange pauldrons and printed 1X1 tile pieces. This configuration of the bots looks really nice, though they’re not my favourite because of the bright colour. Last and least is a simple Ash Attacker, which is the exact same model we’ve gotten in other sets.

Overall, Axl’s Tower Carrier is a really fun set. I had a lot of fun building and playing with it, and while it still can’t scratch The Fortrex — a literal castle on tank treads — in terms of the best set in the Nexo Knights lineup, it does well for what it is. The tower carrier is also a nice parts pack.

With Nexo Knights being a Castle theme, and the “castle” existing in the form of 70317: The Fortrex, Nexo Knights was desperately missing an epic siege machine to breech the walls of that well fortified structure. Enter this set, then, as exactly what we’ve been looking for. 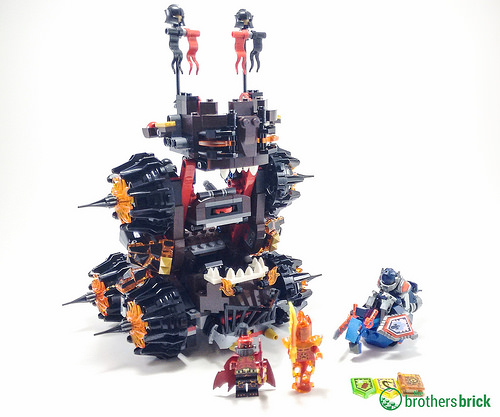 This set is a very LEGO take on the concept of a siege tower. In most pictures you’ll see of this set you will notice that it is a rather tall, wheeled structure that seems to have two floating wheels just hanging around. That’s because the default orientation of this model is actually a very large six-wheeled machine that then transforms into a siege tower. Grab the back of the model and push it forward and the entire rear third will ascend and form a tower. This transformation works great and reveals some nice hidden details such as a disc launcher and a faux monster face built into the tower’s face. 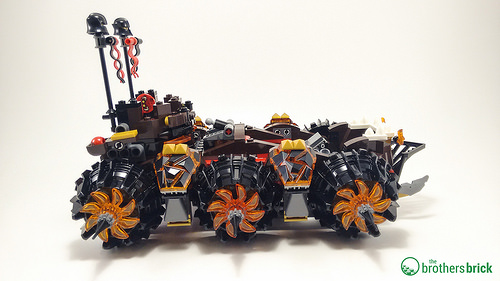 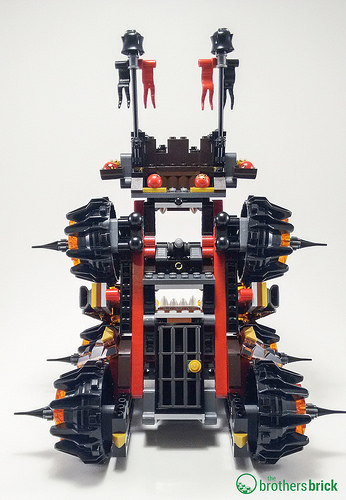 At the back there’s a prison to put captured Knights into (Clay is included in the set). Also at the back you can drop General Magmar himself at the top perch, where you can operate a pair of small catapults. In either configuration the build is great fun to push around thanks to the massive wheels. Kids and adults alike will probably get as much play value out of simply driving it around with wheel-blades spinning wildly as they will with the transforming feature or the launchers.

Overall it’s very nicely designed and makes great use of the black/red/brown/transparent orange colour scheme that the lava army uses.

Because my light box isn’t big enough, I couldn’t take a picture of its scale compared to The Fortrex, but take my word that it works out nicely.

The other small build is a robotic steed for Clay. It’s the exact same build as the horses Macy, Lance and Aaron got in the sets 70314: Beast Master’s Chaos Chariot, 70316: Jestro’s Evil Mobile and 70325: Infernox captures the Queen, respectively. 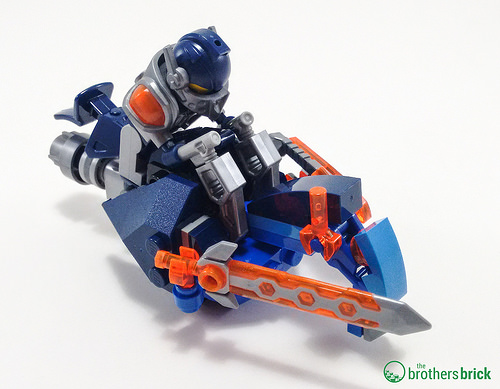 The build itself, based off of a bike cowling, is superb and one of my favourite small designs LEGO has put out in recent years. It’s a perfect sci-fi version of an armoured knight’s horse and manages to be perfectly conceived for such a small form factor to fit into minifigure scale.

This build manages to work out even better than the other ones, since Clay’s colour is blue, so the blue horse fits him best.

Finally, we come to the minifigures, and they do not dissapoint. First off, the general himself. Magmar is just such a great minifigure and would fit into any generic fantasy setting. That’s not a 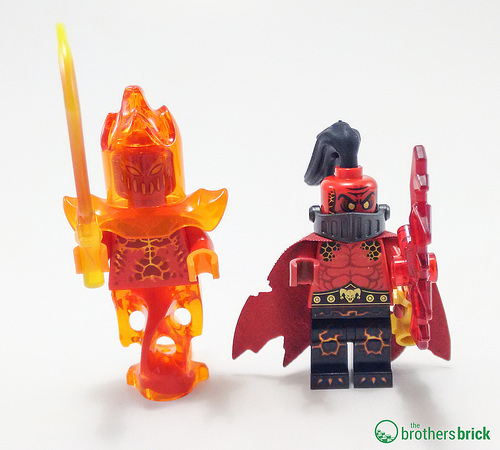 knock on the design — on the contrary, he looks so menacing that you’d gladly drop him into any situation as the big bad. This figure really depends on its attachments,, because without them Magmar looks like a generic Lava Army foot soldier. Luckily his tattered cape and armour mouth pieces (which I’m sure has a specific name) really make this figure. That mouth piece is new and I’m sure it will enjoy a long life being used in fan-created figures. The top knot piece, as all other top knot pieces, will free itself from a minifigure head at the slightest breeze and can be rather irritating. Flama is the other bad guy here and he’s just as good, managing to truly look like

a beast made out of living lava. His translucent head and armour pieces, together with a recoloured specter leg piece make this a standout figure which, like Magmar, will have lots of uses outside of Nexo Knights. Last and least is Clay. who features the exact same prints and pieces we’ve gotten in previous sets.

Aside from the builds and figures there’s a lot of smaller important pieces. All the discs and small Technic pieces used on the machine are printed with faces, implying that the Lava Army uses living creatures as ammo. There’s also three Nexo powers and a book of power. All of these pieces are great prints and make nice little additions to the set.

As a decent playset and average parts pack, I think this set is better than the sum of its parts thanks to its size and heft, as well as the fact that it fills a much-need role in the Nexo Knights lineup. The Flama and General Magmar figs are standouts and, like 70324: Merlok’s Library 2.0, it’s improved greatly if you already own The Fortrex. 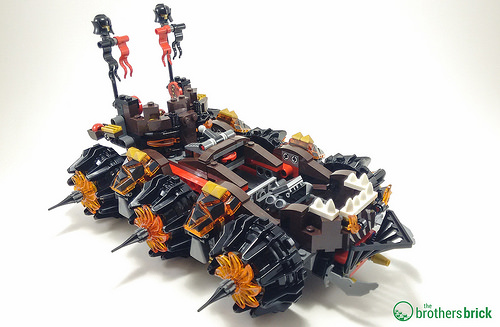 So that’s the final two large sets from one of my favourite lines. The Tower Carrier is my personal favourite, but let us know which one you prefer!