LEGO released a whole wave of sets in North America on August 1st, including sets from Super Heroes, Ninjago, LEGO City Volcano and Technic. Today we’ll be taking a look at one of the new Marvel Super Heroes sets, which includes two brand new entries to the LEGO Superhero cast, Ghost Rider and Hobgoblin. 76058 Spider-Man: Ghost Rider Team-up has 217 pieces, and retails for $19.99 USD. 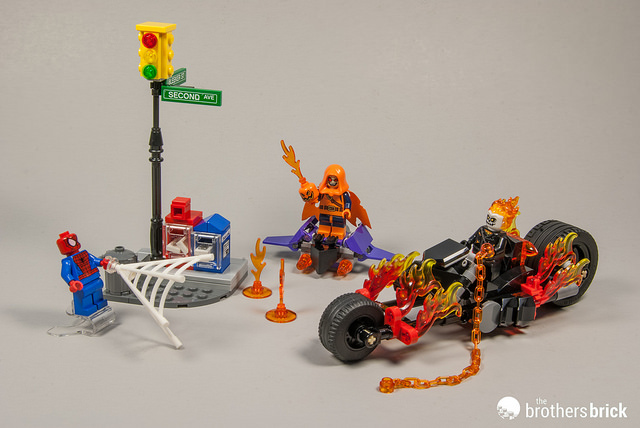 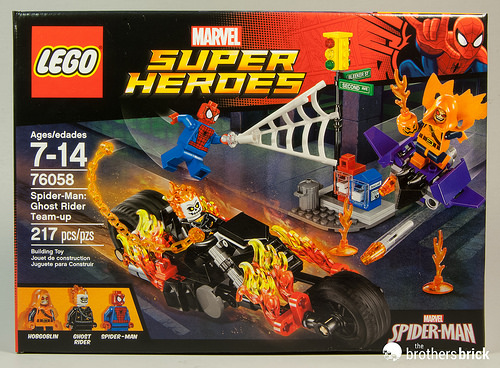 76058 Spider-Man: Ghost Rider Team-up is one of four new sets this fall to include Spider-Man, as this wave of Marvel Superheroes focuses on Spidey and his cohorts. This set is the smallest of the bunch, and with 217 pieces for $20, clocks in at a very respectable price-per-piece ratio, particularly for a licensed set. For that price, you get Ghost Rider on a monstrous flaming bike, Hobgoblin on a small flyer, a piece of a street corner with news stands, and of course, Spider-Man. Inside the box you’ll find two large numbered bags, a sticker sheet, instruction manual, and a small comic book featuring the scenes set with each of the four new Marvel Superheroes sets. 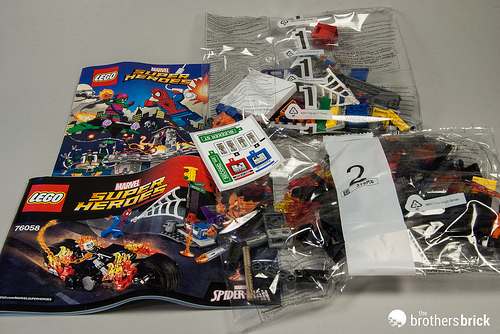 The instructions start off building Spider-Man and a trans-clear jumper piece to make Spidey spring through the air. Though the jumpers were released last year, this is the first set I’ve gotten with one, so I was curious to try it out. It takes a bit of wrangling to attach a minifigure to the jumper, as the clutch is intentionally very, very strong, but once attached, the jumper works pretty well. Kids will undoubtedly find that flinging minifigures with the jumper ludicrously fun, and I had a bit of amusement with it myself. It’s a great way for LEGO to add a lot of playability to a set with adding only a single piece. Spidey also carries a web, posed in the shape of a shooting cone. This wave of Spider-Man sets is the first to feature this new web, and it’s pretty fun. The cone is held in Spider-Man’s hand by a 1×1 round plate with handle, which is also a new piece this year — it’s the same piece the Ice Queen uses to hold her frozen bolts in the Series 16 Collectible Minifigures. 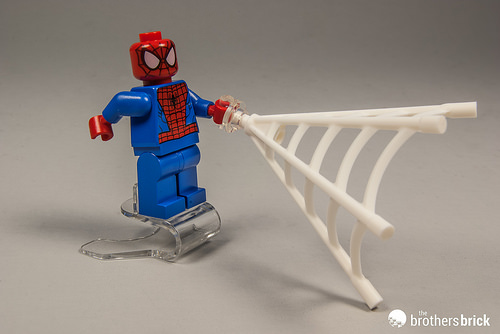 Next up is the Hobgoblin and his Goblin Glider. Hobgoblin’s purple flyer is pretty simple, made of only 31 pieces. However, the scale fits him pretty well, and the craft is very sturdy. The small flags that form the wings are unique in purple to this set, and the 2×4 spoilers next to them only appear in purple in this set and Mighty Micros Batman vs. Catwoman. The Goblin Glider has two flick-fire missiles underneath, where they easily shoot with the flick of a finger. The Hobgoblin also gets a goblin bomb, which is a minifig head with a jack-o-lantern and a flame stuck on top. The same head also comes a goblin bomb in the Mighty Micros Spider-Man vs Green Goblin, but it’s currently exclusive to just these two sets. You’ll also get two exploded goblin bombs, AKA trans-orange 2×2 radar dishes with flames on top. They work well to give an air of apocalyptic boss battle doom to the playset. 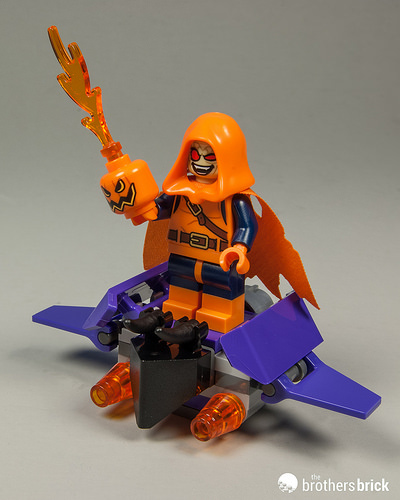 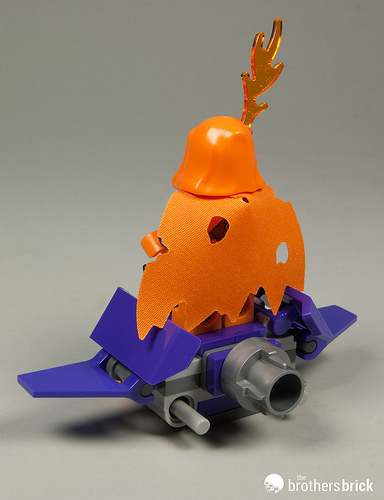 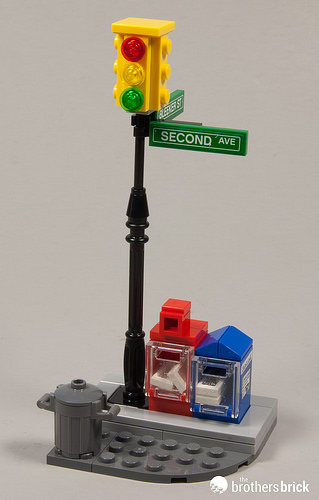 The street corner isn’t much of a build, but it works surprisingly well to set the atmosphere. You get a bit a of a sidewalk, which is tiled over. As an aside here, I’m occasionally baffled by LEGO’s part selections; one side of the sidewalk is a 1×8 tile, and the other side is made of four 1×2 tiles. Perhaps a kindly designer thinks that builders will prefer the 1×2 tiles (and he or she is probably right). At any rate, two small news stands sit upon the sidewalk, made of the classic 2x2x2 containers in red and blue. Each has a sticker for the side, advertising the paper. The blue box holds the Front Line with the headline “The Vulture preys over the city!” and the red paper is, of course, Spider-Man’s favorite, the Daily Bugle blaring “Spider menace!” Each news stand holds a pair of stickered 1×2 tiles showing a rolled newspaper of the respective news outlet. 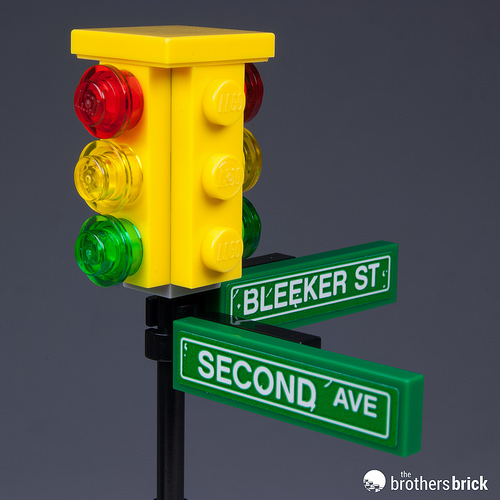 Finally, the street corner has a stoplight and a pair of street sights. It’s always great to get more street signs to fill out your LEGO city. These two read Second Ave. and Bleeker St. The stoplight itself consists of two 1×1 bricks with studs on four sides, surrounded by yellow 1×3 plates. It functions well, especially for such a simple design. You also get a trash can with a carrot stem and a bone. 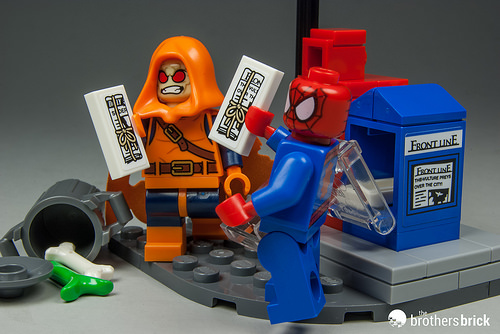 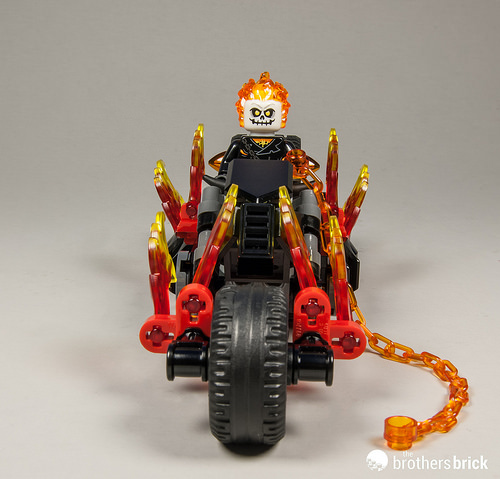 The last construction, and most important, is Ghost Rider and his chopper of doom. The bike is a monstrous beast at over 20 studs in length and 7 wide.

The design is very clever though. You begin by building a little box with tons of attachment points: studs, clips and click hinges. This forms the main chassis, and once everything is attached, the bike is rock solid. The new shield tile in black makes a great cowling over the the forks, and the horns do a great job of making the handlebars feel aggressive. Plus, the motorcycle is on fire. There are eight of the dual-injected trans-red/trans-yellow flames covering the bike, and the effect works well. Ghost Rider has a 2×2 patch of studs to sit on the bike (though he’s standing in my photos, he does sit), and his long trans-orange chain tails behind. 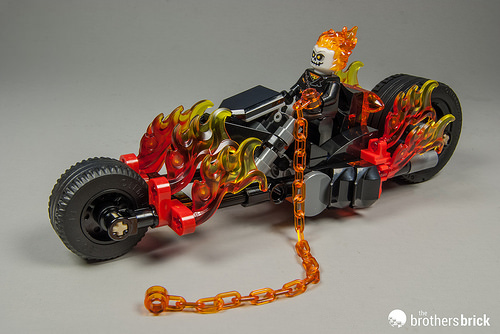 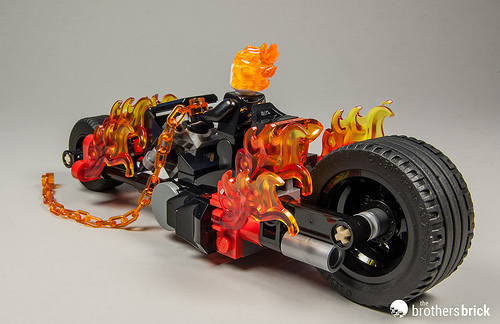 Finally, let’s talk about the minifigures. Spider-Man is the same we’ve seen for several years now, and this version has appeared in nearly a dozen sets. He looks good, but most Spidey fans will probably already have this figure. The other two figures, however, are exclusive to this set, and this is where collectors will find their main interest. The orange-clad villain Hobgoblin looks properly menacing, with dark blue arms and upper legs, and leather belts across his chest and waist. He’s got a leather satchel on his back. His head is double-sided, with alternately grimacing and cackling expressions. His orange cloth cape is tattered and ragged, 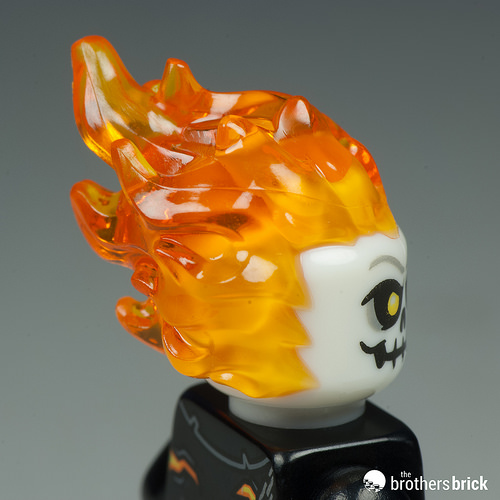 and he’s got an orange hood. This is the first time the hood has come in orange. And then we have Nicholas Cage, AKA Ghost Rider. OK, so I doubt this figure is supposed to be the Nick Cage version (it’s more likely Gabriel Luna’s upcoming role for Agents of Shield, if it’s even a screen tie-in at all), but I’ve always wanted a National Treasure LEGO set, and this is probably the closest I’ll get. Ghost Rider’s torso print has a cool black leather jacket with holes leaking fiery light, and chains wrapped about him. The pants, sadly, are plain unprinted black legs. The head, though, is the real treasure here. A ghastly skull print on a minifig head, the hairpiece is flowing fire beautifully sculpted. Much to my chagrin, though, the fire is glued to the skull, even though you can see a standard stud through it on top of the minifig head. I’m guessing either the piece was too fragile or didn’t have enough clutch on its own. In any case, it’s quite a shame, but the combined pieces do look awesome regardless. 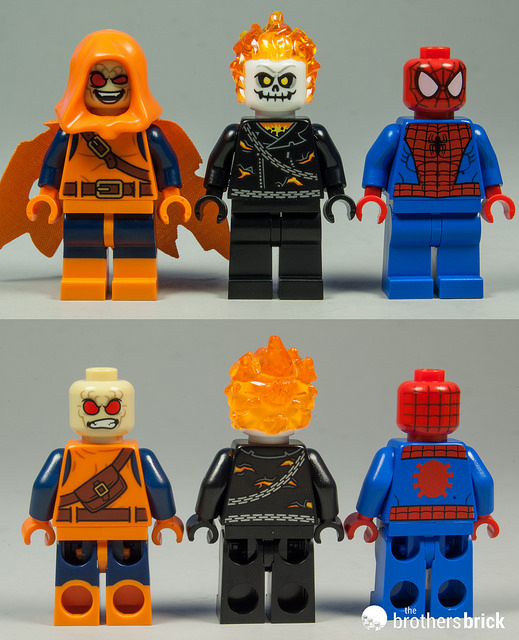 The verdict? For $20, you can’t go wrong with this set. The price point is great for the parts count, and the motorcycle is well designed and fun to play with. The extra features of the goblin glider and the street corner up the play factor and add a lot of value to the set, and you get three minifigs, two of which are exclusive to this set. Collectors won’t want to miss getting as iconic a character as Ghost Rider, and Hobgoblin is a lot of fun and a great addition to the Green Goblin from other sets.