LEGO’s new Collectible Minifigures Series 16 is hitting stores around the world, so be sure to check out our review of Series 16. But how do you find the ones you want? Some people are happy taking their luck with purchasing a random bag, but many fans — be they kids, collectors, or just regular joes — will want to collect the whole set, or maybe just one or two very specific figures. You could guarantee that by purchasing an entire case, but buying 60 figures just to guarantee a set of 16 is very expensive. So, of course, the alternative is to ready your nimble figures and prognosticate what’s in the bags by touch alone. With years of experience doing this since Series 1, we’re here to help make that task a bit easier.

Get your digits ready, it’s time to start poking and prodding plastic bags of minifigs. 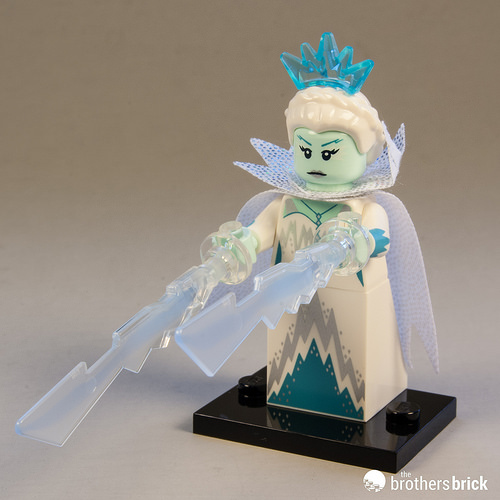 The Ice Queen will be an easy figure to find. She is the only figure in this series to use a 2x2x2 slope as a dress, and fortunately, that piece is easy to feel through the packaging. The piece is large enough that it will be easy to find in the bag, and there’s no need for further confirmation. Once you feel a large, thick wedge, you’ve found the Ice Queen. 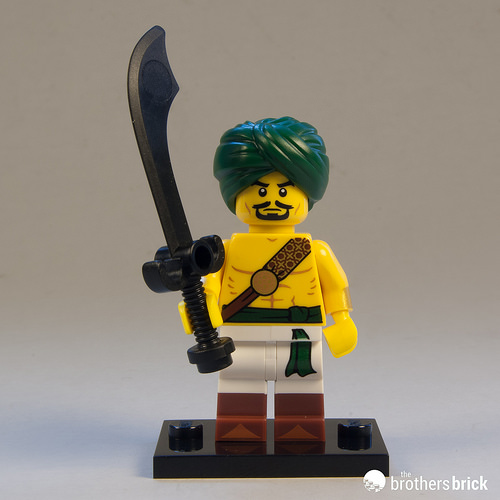 The Arabian Knight can most easily be found by searching for the scimitar. The scimitar will feel like a long, flat, flexible piece, and the hilt — which has very prominent hooks on either side — will distinguish it from the Ice Queen’s ice bolts. Also, once you find the long, flat, flexible piece, if you don’t feel the 2x2x2 slope from the Ice Queen, you’ll know you’ve got the Arabian Knight. The turban is unique to this figure, but it’s easily confused with other hairpieces and helmets. It’s best to stick to the scimitar. 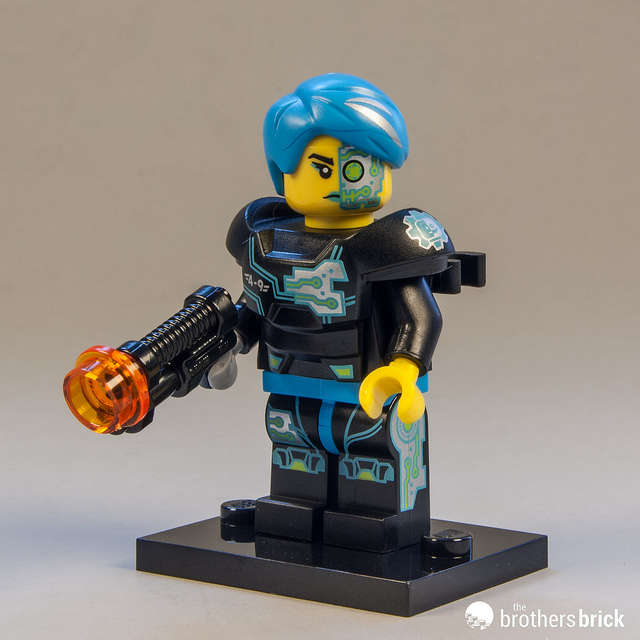 The Female Cyborg can be a difficult figure to distinguish. Her armor is large, but it can be hard to distinguish in the bag. If you’re certain you’re feel armor, you’ve got the cyborg, but the easier method is to feel out the gun. It will feel like two small adjoining cylinders, with another protruding at a 45 degree angle from one. Make certain that you feel TWO cylinders stacked on top of each other, though, since you don’t want to confuse it with the Operative’s gun. 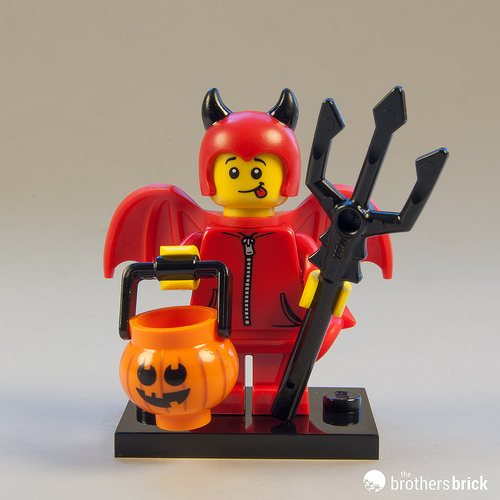 The Devil Costume Kid is loaded with unique pieces. This figure is one of two in this series with short legs (the other being the Penguin Kid), so if you find short, unbending legs, you’ve got one of those two. Next, the trident will be the most obvious piece, and it often falls to the edges of the package. If you feel a long pole with three tines at the end, you’ve definitely found the Devil Costume Kid. The wings can also be a sure giveaway. Feel for two large, cupped triangles. The adjoining point holds the neck piece, which is at a 90 degree angle to the wings. The wings are pointed on the ends, so they should be quite unique. Don’t feel for the headpiece or the bucket; both are easily confused with other pieces. 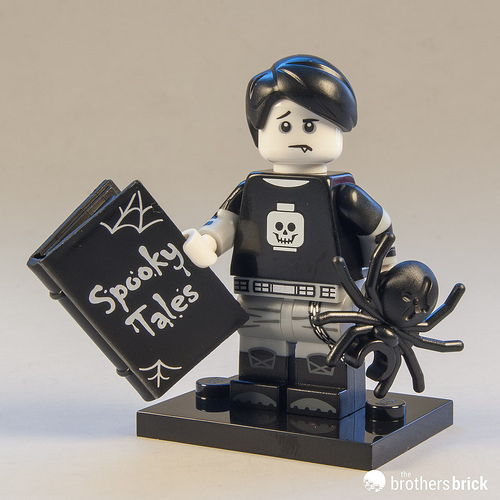 The Emo Vampire has only two distinguishable pieces in the bag, the book and the spider, since the hair is easily confused with the Cyborg’s. Of these, the book will be much easier to find. Remember, the books come flat, not folded, so it will be a large rectangle the size of two books, with a bend in the middle. Make sure the piece has the bend though, so you don’t accidentally mistake it for a minifig stand. You can use the spider to confirm, but if you know you’ve found the book, that will guarantee you’ve found the Emo Vampire. 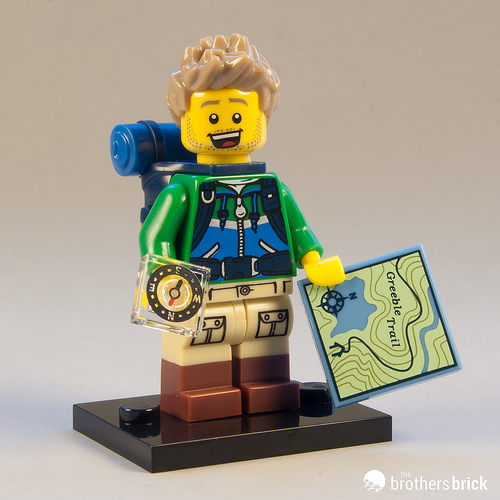 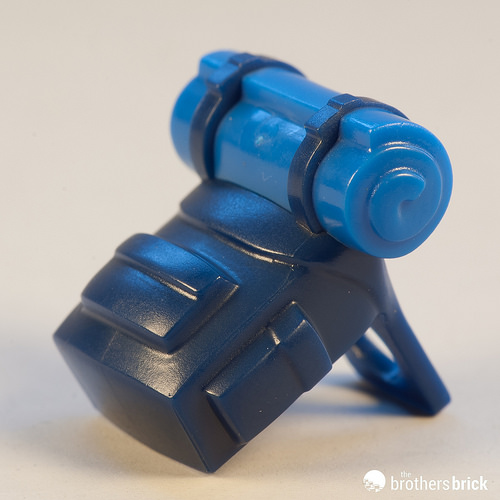 The Hiker is one of two minifigs in this series to carry a 2×2 tile. This tile will be the easiest piece to find in the back, so start by looking for it. Once you find a 2×2 tile, you’ll know you’ve found either the Hiker or the Bald Pirate. Then, feel for the backpack to confirm. It will be a large, lumpy piece with a thin neck bracket sticking off one side. Make sure you feel a large round bit on the other side from the bracket. If you’ve found both this and the tile, you’ve found the Hiker. 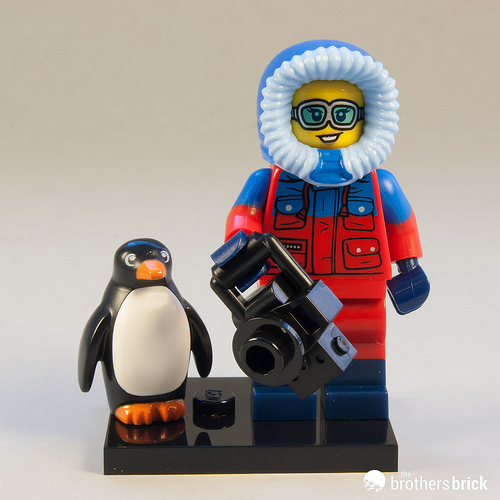 The Polar Photographer is most easily found by the helmet. The helmet is a sphere that’s smooth, but has two huge holes on adjoining sides for the neck and face. These holes should be easy to feel through the packaging, and as long as you ensure there are two openings, you won’t confuse the Polar Photographer’s helmet with that of the Forest Rogue. The Penguin Kid’s penguin helmet can feel a bit similar, but it has a very prominent beak, so you shouldn’t confuse that either. After the helmet, you can then find the penguin to confirm, who is a large, pill shaped piece, with a small, sharp point for a beak, and a stud on the opposite side. 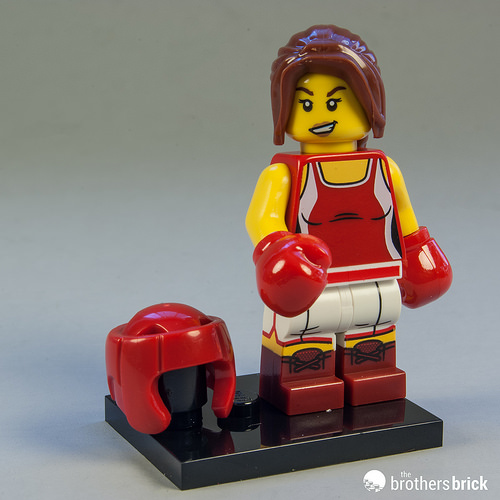 The Female Boxer is the only figure this series with different hands on regular minifig arms, so start by feeling the torso in the bag. If the torso has big, lumpy hands, you’ve found the boxer. The other easy piece to find, which you can use to confirm that this is the Boxer, is the 1×1 round brick that’s used as a helmet stand. There aren’t any other pieces in this series that you could mistake it for, as long as you make sure it’s thin enough that it’s a round brick, and not a head. 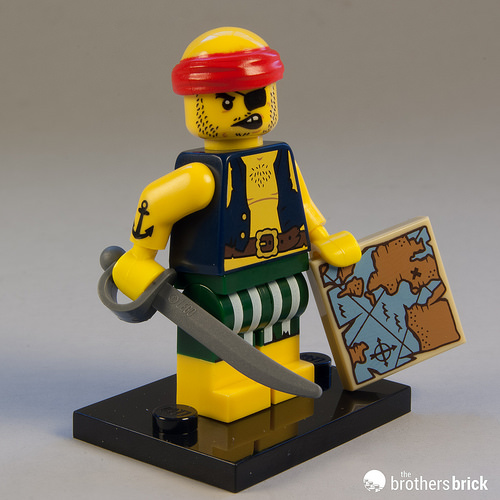 The Bald Pirate is the second figure in this series with a 2×2 Map Tile, and this piece is usually very easy to find in the blind bags. So start by finding the map, and then feel for the sword to distinguish this figure from the Hiker. The sword is a small, flat, flexible piece, and you’ll feel the hilt one end. It’s significantly smaller than the Ice Queen’s ice bolts or the Arabian Knight’s scimitar, so you shouldn’t confuse it with those. 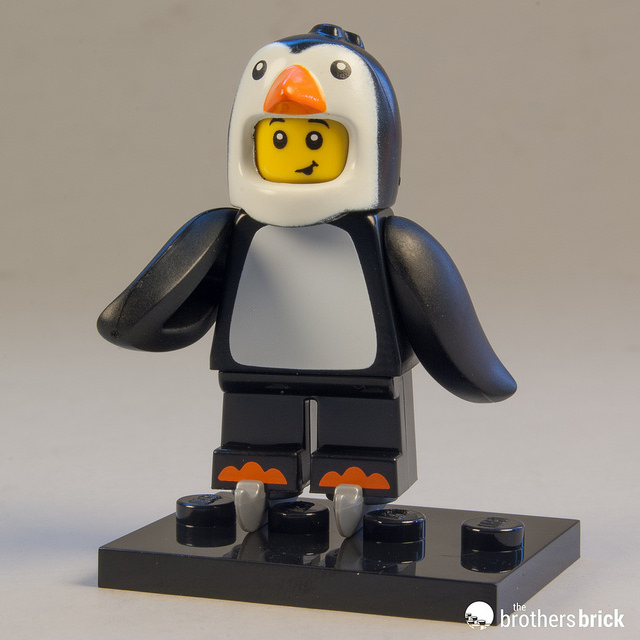 The Penguin Kid has wings for arms, and these are very easy to feel through the packaging. If you find a torso that has large, flat, pointed pieces instead of arms, you’ve definitely found the Penguin Kid. Alternatively, if you find short legs, you’ve got either this or the Devil Costume Kid, so then just find the winged arms to confirm that you’ve actually got the Penguin Kid. 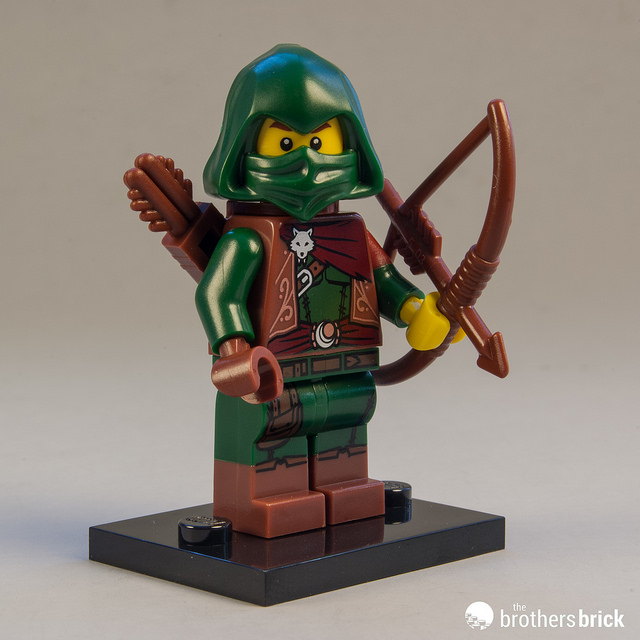 The Forest Rogue’s bow will be the easiest piece to find, and fortunately it’s unique to this series. Feel for a small set of rods connected in a diamond shape. There aren’t any other pieces in this series that can be easily confused with the bow, so once you find the bow, you know you’ve found the Forest Rogue. If you’re still unsure, find the the quiver to confirm; it will be a small long rectangle, with a neck piece protruding at an odd angle. 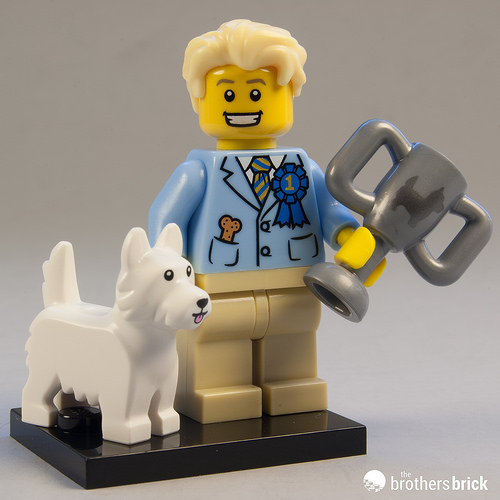 The Dog Show Champion’s trophy cup is the most obvious giveaway here. The cup will feel like a thick cylinder, about the size of a 1×1 round brick, but it’s got two large handles on opposite sides, and of course the tapered base. All of these together make this a very easy to feel piece in the blind bags, and once you’ve got it, you can be certain you’ve found the Dog Show Champion. If you wish to confirm, find the dog, which feels like a 1×2 brick with a head and two small legs, and a very pointy tail. 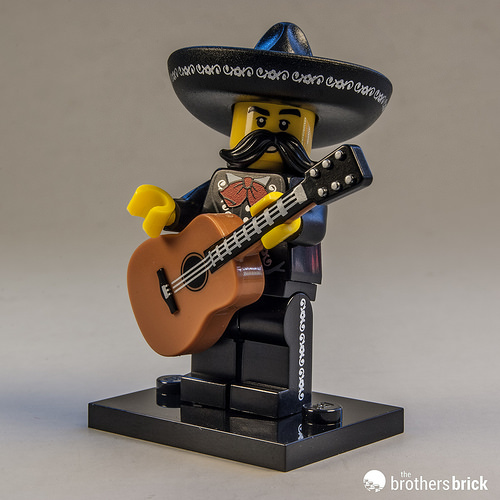 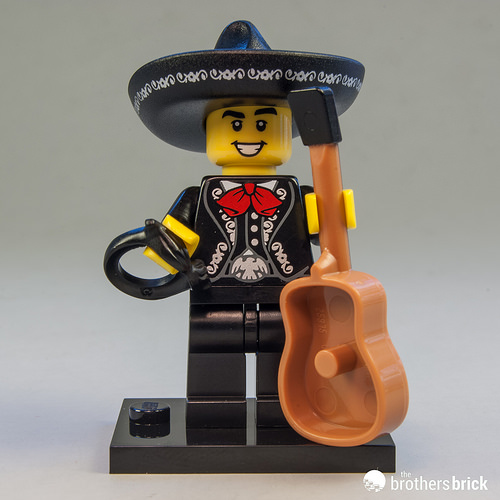 The Mariachi Player has two very unique pieces. The first is the sombrero, which is a huge disk (almost 4 studs across), with a large cone in the center. It will be very easy to feel through the packaging, and you aren’t likely to confuse it with anything else. Alternatively, you can search for the guitar, which feels like two smaller thick oval, with a long rod. Remember, the back of the guitar is hollow with a single peg, so don’t let that throw you off. Finding either the sombrero or the guitar will ensure you’ve found the Mariachi Player. 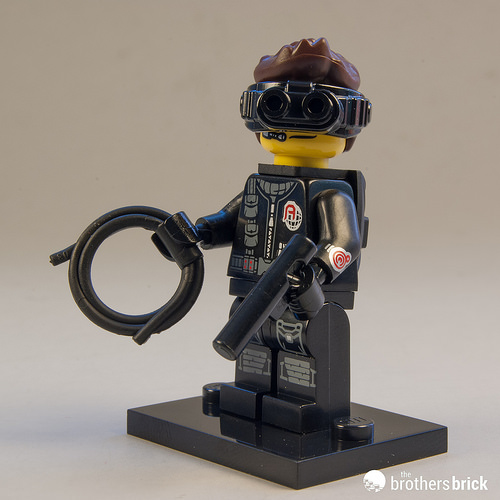 The Operative is one of the more difficult figures to find, since it has no large, obviously unique-feeling pieces. Your best bet is to feel for the rope first, which is a small ring. Don’t confuse it with the Mariachi Player’s mustache, though — the rope will be just a simple ring, and won’t have a large flare on one side. Other parts in the package should let you easily distinguish this from the Mariachi Player if you’re having a hard time telling the rope from the mustache. If you think you’ve got the Operative though, search for the gun to confirm. It’s a small L shaped piece, and should be easily distinguished from the Cyborg’s gun. 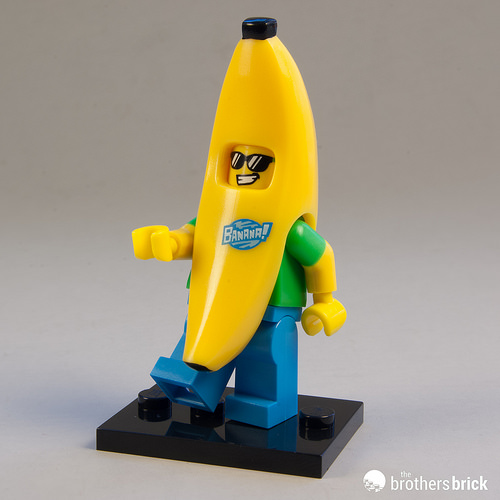 Banana Suit Guy is one of the easiest figures to find. The large banana suit is almost sure to be the first thing you feel in the package, and it’s readily distinguishable from anything else in this series. Just search for a large piece that’s nearly as tall as a whole minifigure. It should be nearly two studs wide, and have a gentle C shape to it. There’s really nothing else in this package that feels unique, but fortunately there doesn’t need to be. 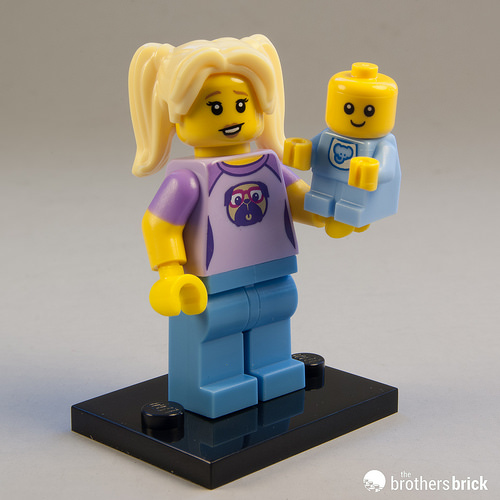 The Babysitter can be a little challenging to find, but won’t be too hard. Search for the baby’s torso first; remember that the head and torso are separate pieces. The torso is about the size of a 1×1 brick, and you should be able to feel the two hands through the packaging. Next, search for the Babysitter’s hair, which has two large ponytails on either side. Once you’ve found both the baby and the hair, you know you’re holding the Babysitter.