I never would have guessed before playing Overwatch that I would build a pink gun for my LEGO arsenal. D.Va quickly became my favorite hero to play in Overwatch, and her pistol used outside her mech looked rad. Plus, the bunny charm hanging from the mag well was too adorable. I find building a pistol or similarly sized 1:1 scale build harder than larger rifles, swords, or launchers due to the limited space for structural stability and that weapons of this size can be held with one hand. Combine this with the limited selection of LEGO elements in pink, and you have quite the building challenge. 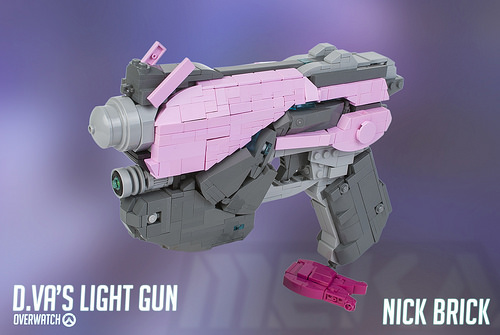 Working parts include a moving trigger and removable magazine. These features, a 360° view, and a small breakdown of some paneling are shown in the following video.

See all photos of D.Va’s Light Gun in its Flickr album.