As part of the summer wave of LEGO Star Wars sets, LEGO released 75149 Resistance X-wing Fighter from The Force Awakens. The set includes three minifigs (plus BB-8) and 740 pieces. 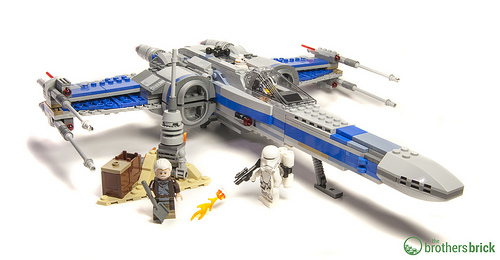 At first glance, this new X-wing looks a lot like 75102 Poe’s X-wing Fighter released last year, and your first glance would not be wrong.

This new blue and gray X-wing is essentially identical to the orange and black X-wing — a nearly one-for-one color replacement. Rather than copying and pasting or rehashing my write-up of the build experience, see my review from last December.

This version of the X-wing depicts the one seen briefly at the very beginning of The Force Awakens, when Poe Dameron visits Lor San Tekka on Jakku to get the memory unit with the final piece of the map leading to Luke Skywalker. The X-wing takes damage while sitting on the ground, and never even lifts off. (Oh c’mon — I’m not going to warn you about spoilers at this point.)

Don’t get me wrong: By being basically identical to the first Force Awakens X-wing, this version is still a pretty great model — sleek and swooshable, but lacking the long, sloping angle forward of the cockpit.

The 75149 X-wing includes the same play features as the 75102 X-wing, with movable wings, cockpit canopy, and landing strut. 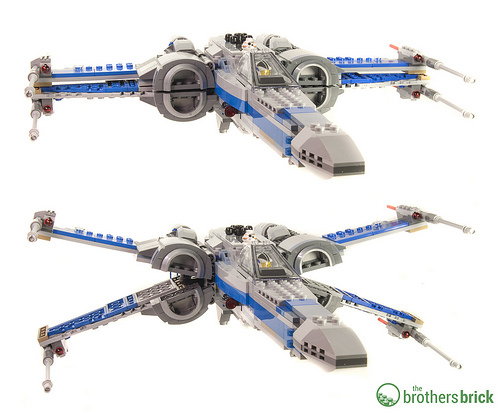 The only difference in the new X-wing is a removable hyperdrive unit (which is what I’m assuming it is) at the rear of the fuselage. Attempting to pull the hyperdrive unit out just pulls the decorative gear off, but then you can use the Technic pin to pull it out. 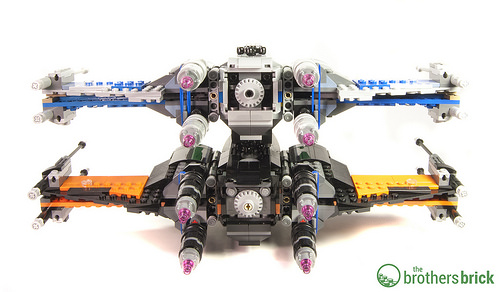 What I would really have loved to see is a cannon that pops down from the underside of the X-wing and can spin around via a Technic pin connected to a knob on top. This omission in favor of a removable hyperdrive seems like a huge missed opportunity. To be fair, though, there isn’t very much clearance between the main fuselage and the ground, and placing the cannon farther forward wouldn’t be accurate.

Instead of the ground crew gear that came with last year’s X-wing, the new X-wing includes a moisture vaporator that collapses as flames pop up. Like the collapsable Maz Kanata’s castle in 75139 Battle on Takodana, this play feature is more heartbreaking than fun. 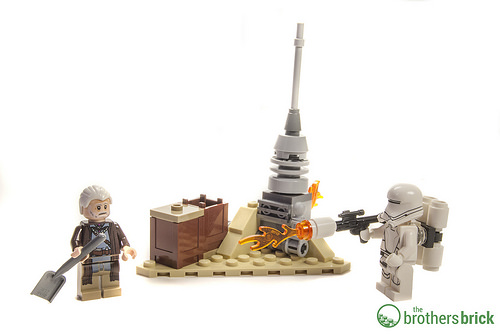 Poe’s X-wing includes 717 pieces, 3 minifigs (plus a droid), and retails for $79.99 in the US. Oh wait, that was a copy and paste from my previous review, and I promised not to do that. This one actually has 740 pieces.

As I keep saying, this set is essentially identical to the first version of the Force Awakens X-wing. But the good news for builders like me who don’t use a whole lot of black and orange is that the light gray and blue are a whole lot more useful. I’m glad to have another proper X-wing cockpit, though. 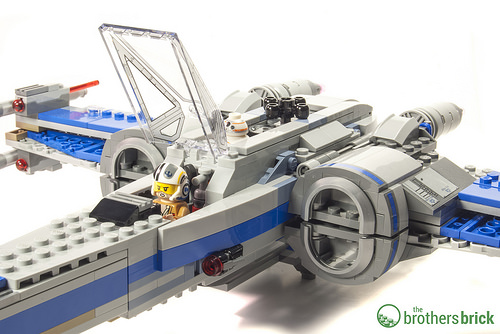 It would be hard for me to recommend this set at full price for the bricks alone. Dang it! That was another copy and paste from my previous review…

The highlight for me in this set was the trio of minifigs — Poe Dameron in his flight jacket, Lor San Tekka, and a First Order flametrooper, plus BB-8. 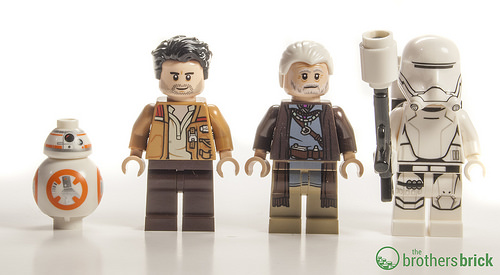 Like the rest of the Internet, I think Poe Dameron is pretty cool — though Rey is easily my favorite new (perhaps even all time…) Star Wars character — so having Poe in another outfit is nice. 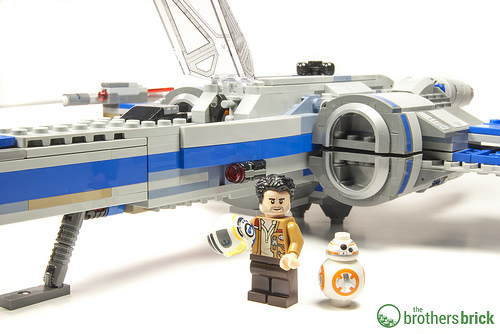 As much as I’m not a huge fan of LEGO sets depicting scenes and vehicles only seen in movies for a few seconds, I honestly prefer the actual design of this X-wing to the orange and black version that has a lot more screen time — with a lot more action — during the Battle on Takodana later in The Force Awakens. It’s great to have another version of Poe Dameron, and Lor San Tekka is an intriguing character with minifig parts useful in builds for a variety of themes, from both LEGO Castle to Western and post-apoc.

That said, my final recommendation for this set is going to be essentially the same as it was for the previous X-wing: Not really worth the price, except on sale. I also think the lack of the only interesting potential play feature (the retracting belly gun) was a really cool opportunity the designers missed.

The good news for those who heeded my recommendation on 75102 Poe’s X-wing Fighter is that it’s currently 20% off from Amazon. Buy the earlier one on sale now, and if you need both versions, wait another six months or so to buy this one.