The clock tower of the British Houses of Parliament is an English icon known the world over. Oddly enough, the famously named Big Ben is actually the largest of the 5 bells housed within the tower, with the clock tower being properly called the Elizabeth Tower. However, over the last 157 years since the tower’s completion, it’s become globally known as Big Ben. And now it has inspired LEGO’s second largest architecture set ever, 10253 Big Ben, with 4,163 pieces. The set is currently available to LEGO VIP members, and will go on sale to everyone beginning July 1 for $249.99. 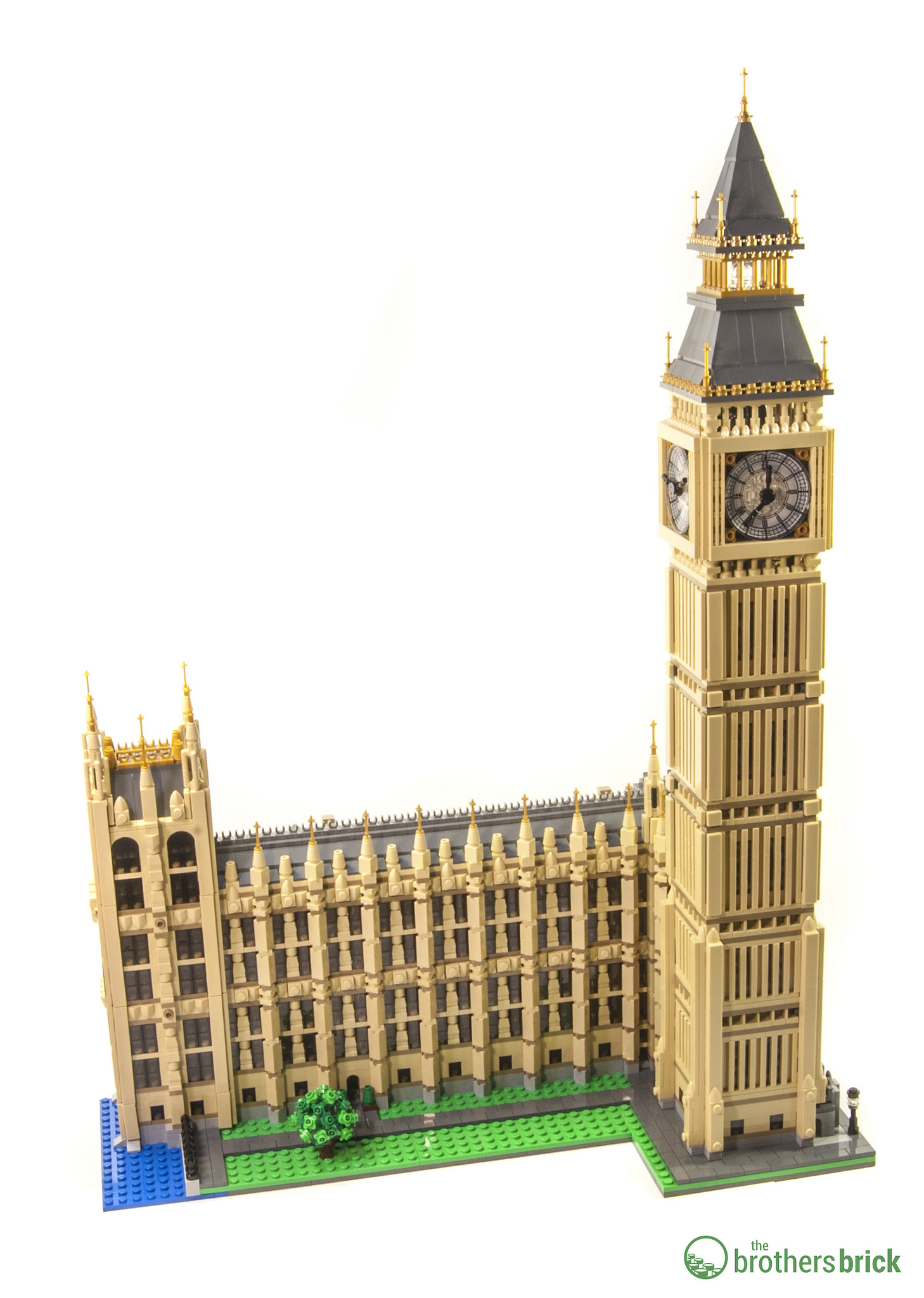 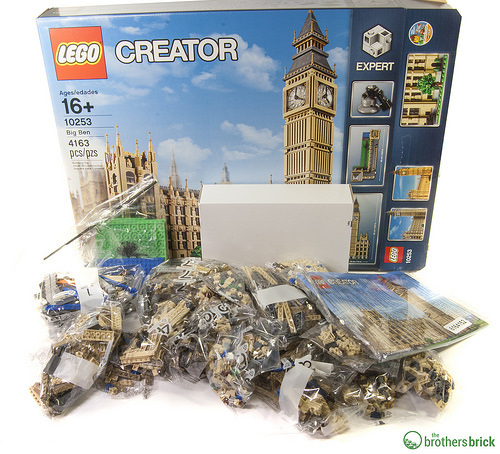 10253 Big Ben is a massive set, just by parts count alone, not to mention that the finished model stands nearly two feet tall. Inside the box you’ll find loads of bags, numbered for subassemblies 1 through 7, a bag of miscellaneous large pieces, and the bagged instructions. For no discernable reason, the bags for subassembly 2 come in a plain white box. 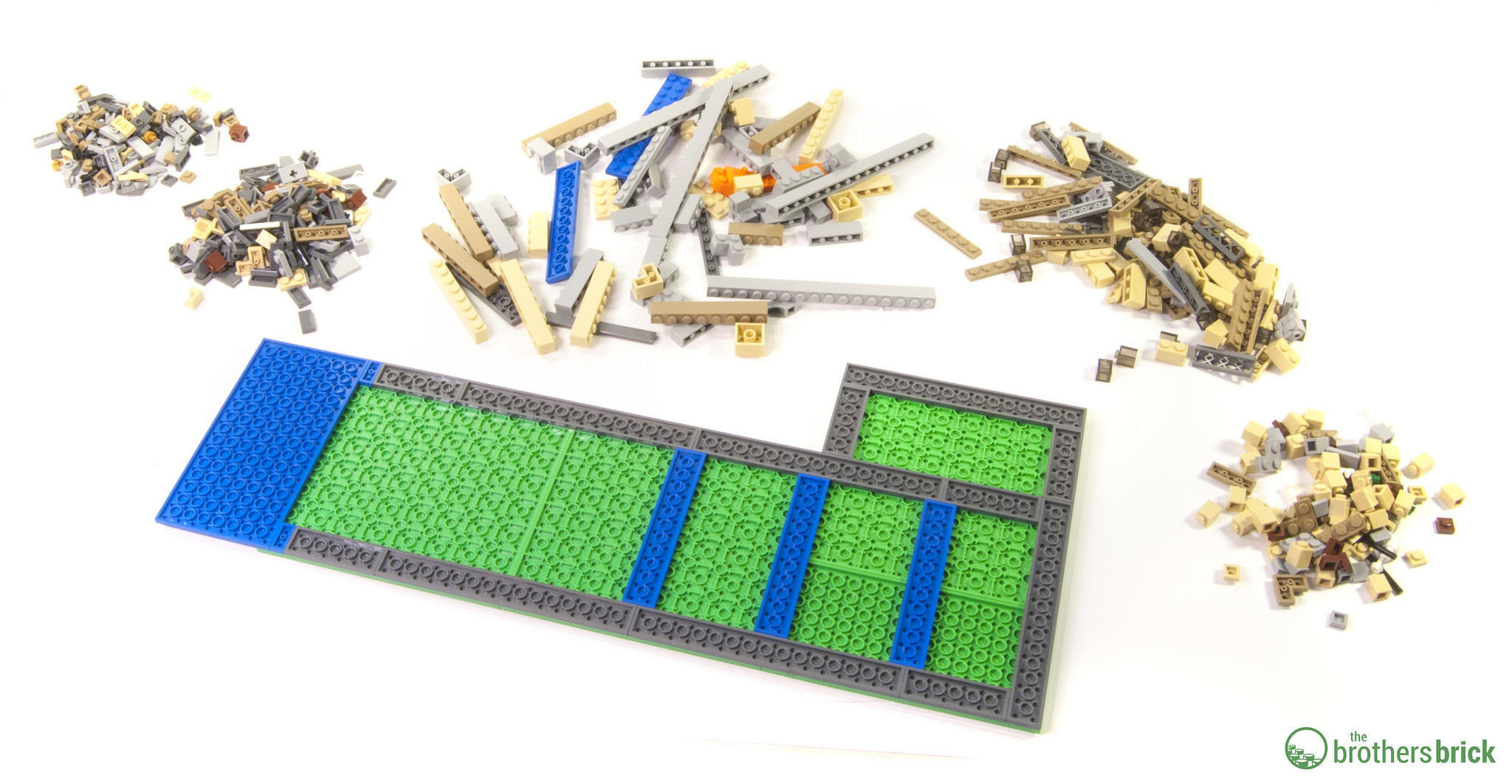 The base is made of large plates, not a smooth-bottomed baseplate, which allows for a bit of the Thames at the east end of the palace to be represented in blue. 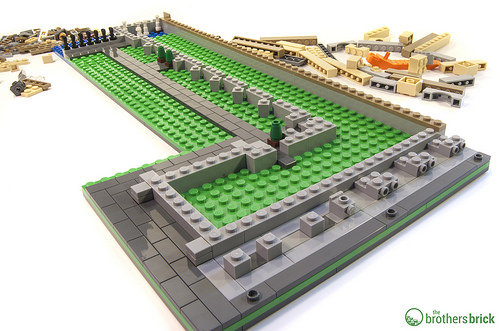 The build process is relatively straightforward, working studs-up in rows around the entire foundation, with just a few exceptions for studs-not-on-top facade details. Right away in the first level of bricks, you’ll encounter one of the more unique bits of construction in the set: bricks set at 45° angles from the normal plate axes, to mimic the stone columns on the detailed exterior walls. 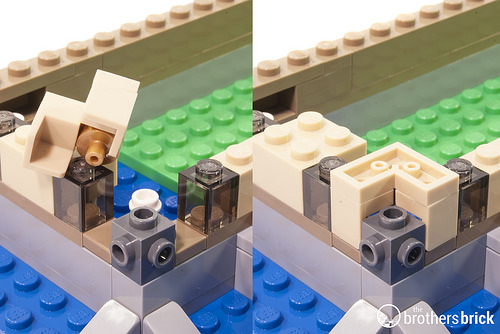 With over 4,000 pieces, 10253 Big Ben is a highly detailed set. Most of the pieces are some version of 1×1 and 1×2 plates and bricks, and many of them come in multiples of hundreds. So it’s no surprise that the build can be a bit tedious, occasionally feeling as if you’re not making much progress when you’ve just placed several hundred pieces on the model and realize that you’ve only made the building a single brick taller. However, there are some highlights, such as a very clever little technique to place a 1×1 with 5 studs on one of the building’s corners, while maintaining a dark tan line of detail around the building’s foundation. The designer’s solution is to place 1×1 corner panels upside down around the unwanted studs, an elegant solution. (Note: the common fan solution of placing 1×1 Technic bricks adjacent to the 1×1 with 5 studs is actually verboten in official sets, since Technic pin holes are at just slightly a different height than sideways studs, thereby stressing the bricks when forced together. Additionally, this still would not leave the dark tan row of plates around the base.) 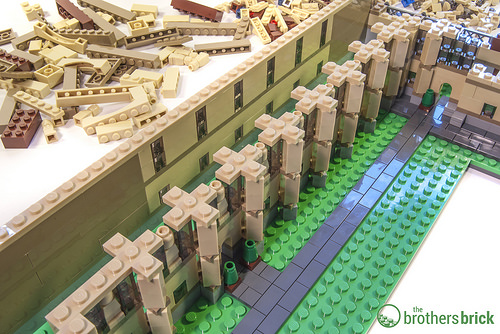 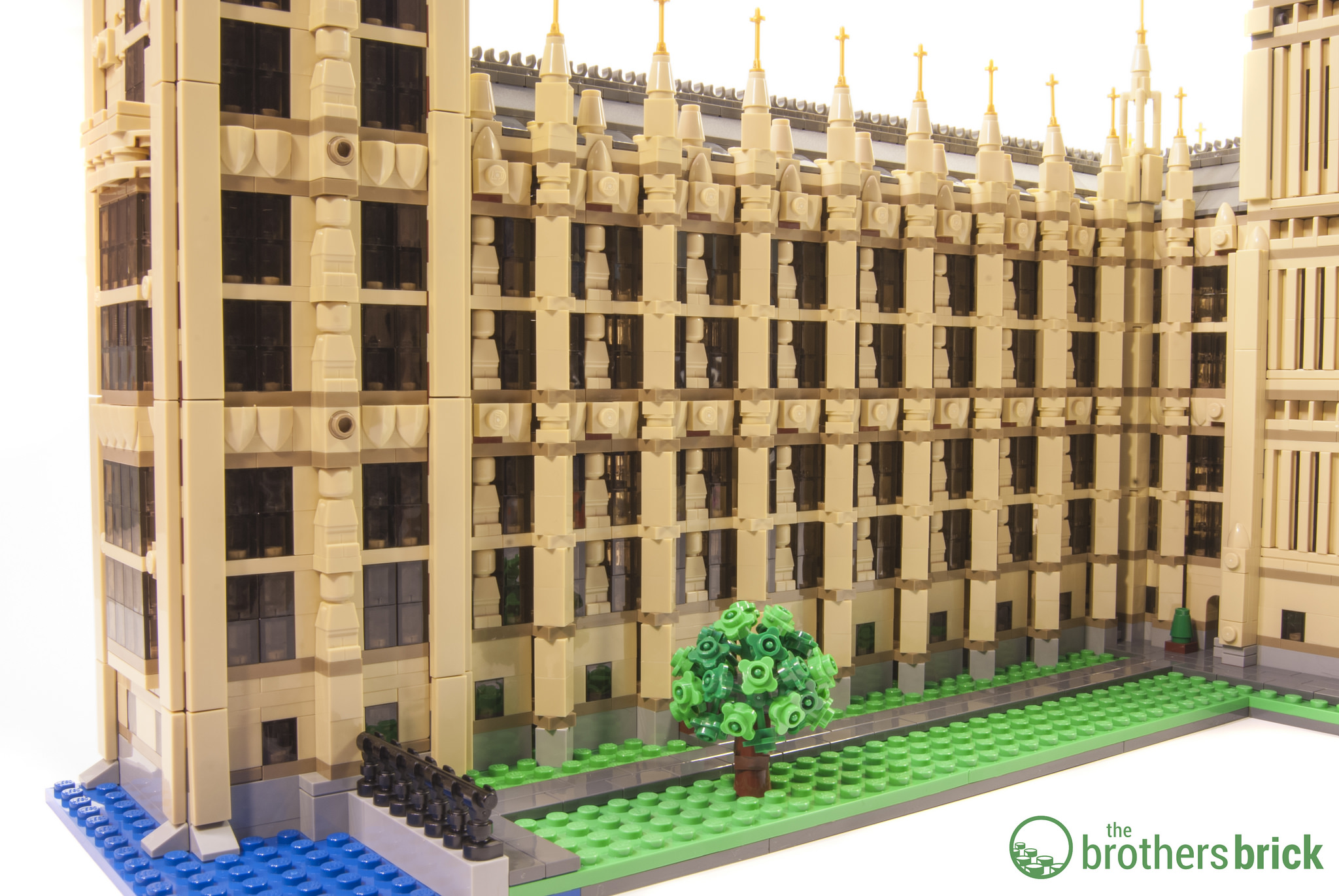 The final model has just beautiful detail. On the building front, the 1×1 bricks twisted 45° create a visually interesting front, which are held secure by tan 3×3 cross plates.

On the east end of the building, the large windows are set a half-stud out from the rest of the wall, which also gives a nice visual appeal. The section is held secure using a combination of clips/bars and jumper tiles. The lone tree out front is a brilliantly simple microscale tree, taking advantage of the new 6-stemmed flower stalk, and no doubt we’ll see this technique proliferate in the fan community. 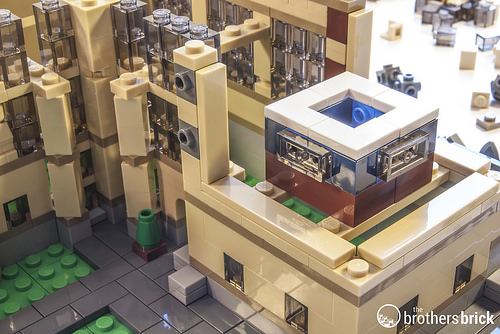 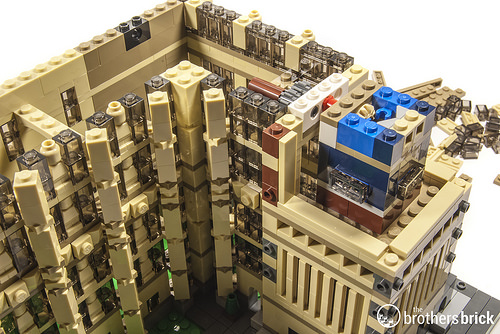 The clock tower is perhaps the most repetitive portion of the build, with five nearly identical floors, each consisting of hundreds of pieces in a pattern. The walls of the tower are made of sideways plates, stuck to a central support column by way of bracket plates. The second floor houses a simple gear mechanism which connects the small clock on the south side (behind the tower) to the large clock faces in the spire. Turning the small clock makes the hands on the clock tower move. The main clock floor houses a large gear, and on the back of each clock face is a smaller gear which meshes when the clock face is in place, so the hands on all four clocks move in sync. Sadly, the hands are in fixed positions relative to each other, so it can’t really be set to a specific time via this mechanism. 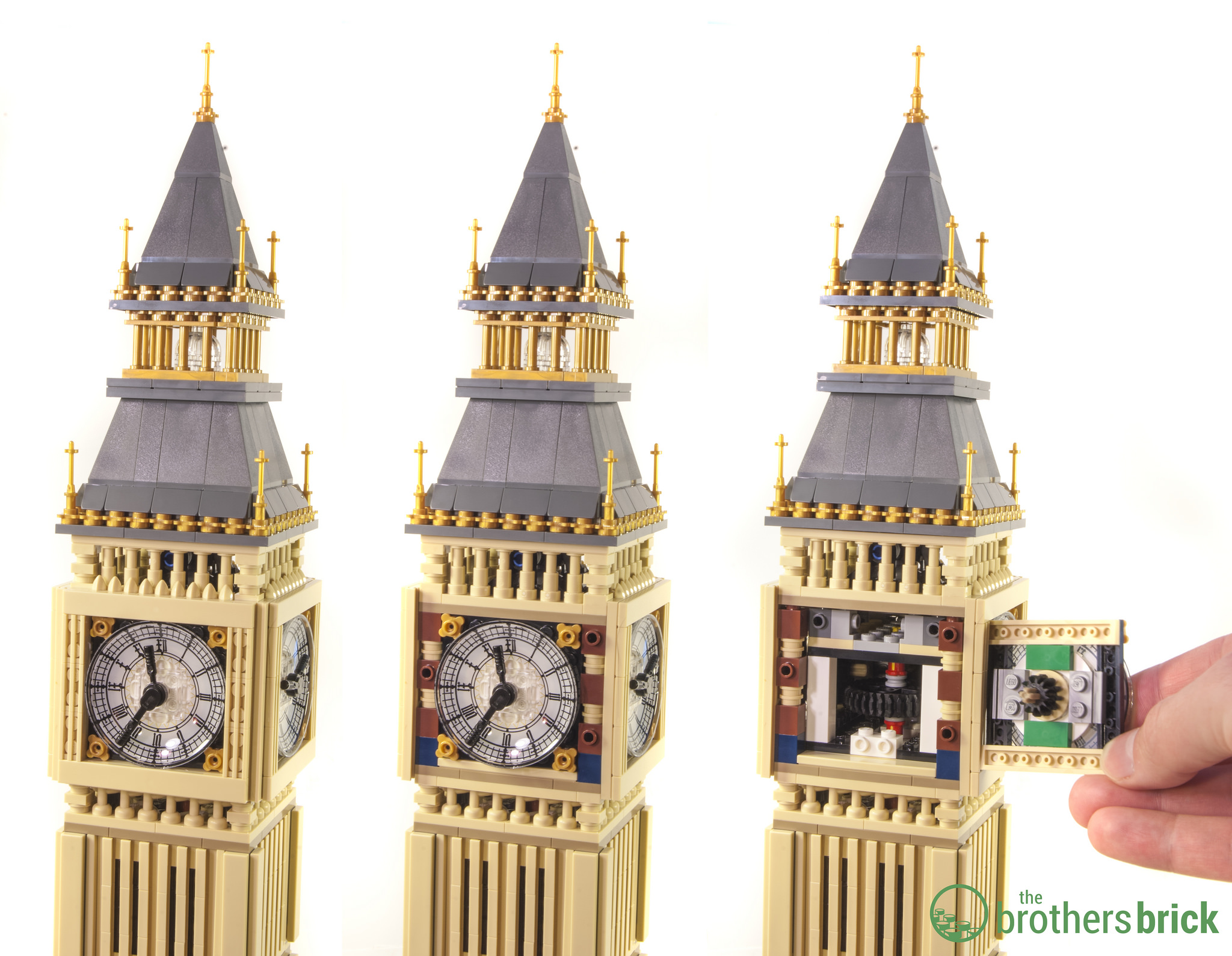 Just above the clock is Big Ben itself, hidden in the completed model. It’s in the picture above, just above the clock, behind the tan telescope piece. Fortunately, the model does come apart, with the grey roof sitting on tiles to facilitate easy removal for access to the bell.

Finally, this set comes with a lot of extra pieces. Free pieces are always a nice bonus, and in this set you’ll really hit the motherload. Many of the extra pieces are tools from the clocks’ hands. Since minifig tools come in a prepack of 9 unique tools, and only the socket wrench and closed wrench are used on each clock face, you’ll end up with 4 extras of each of the other 7 tools. 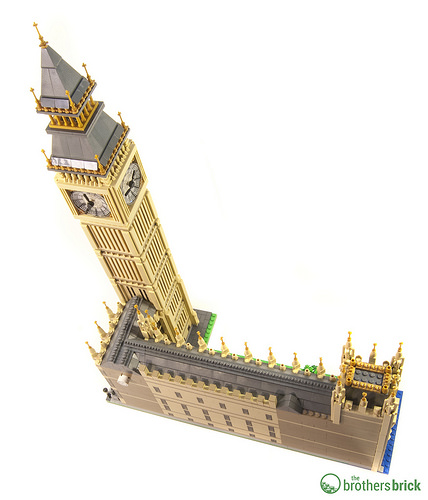 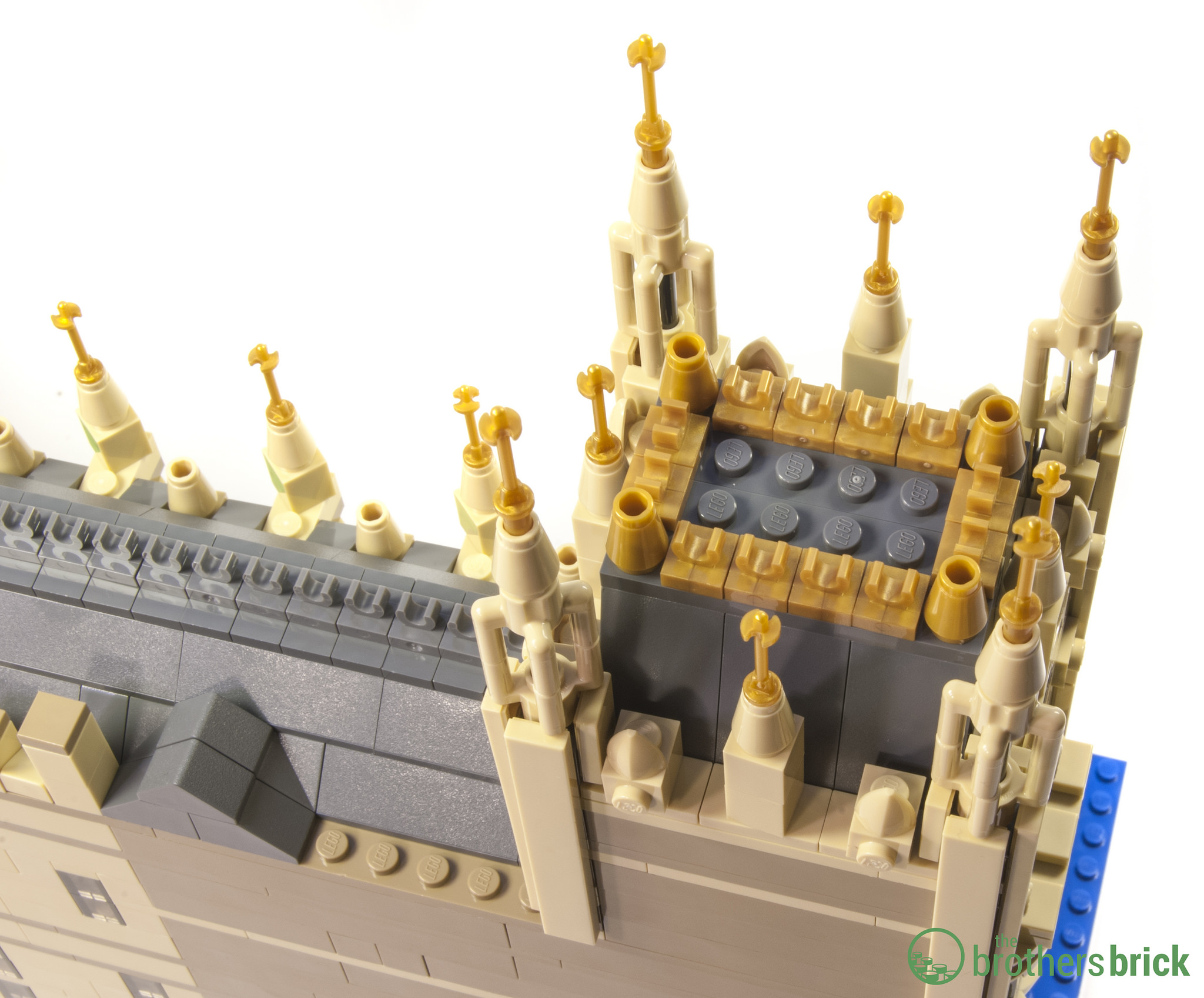 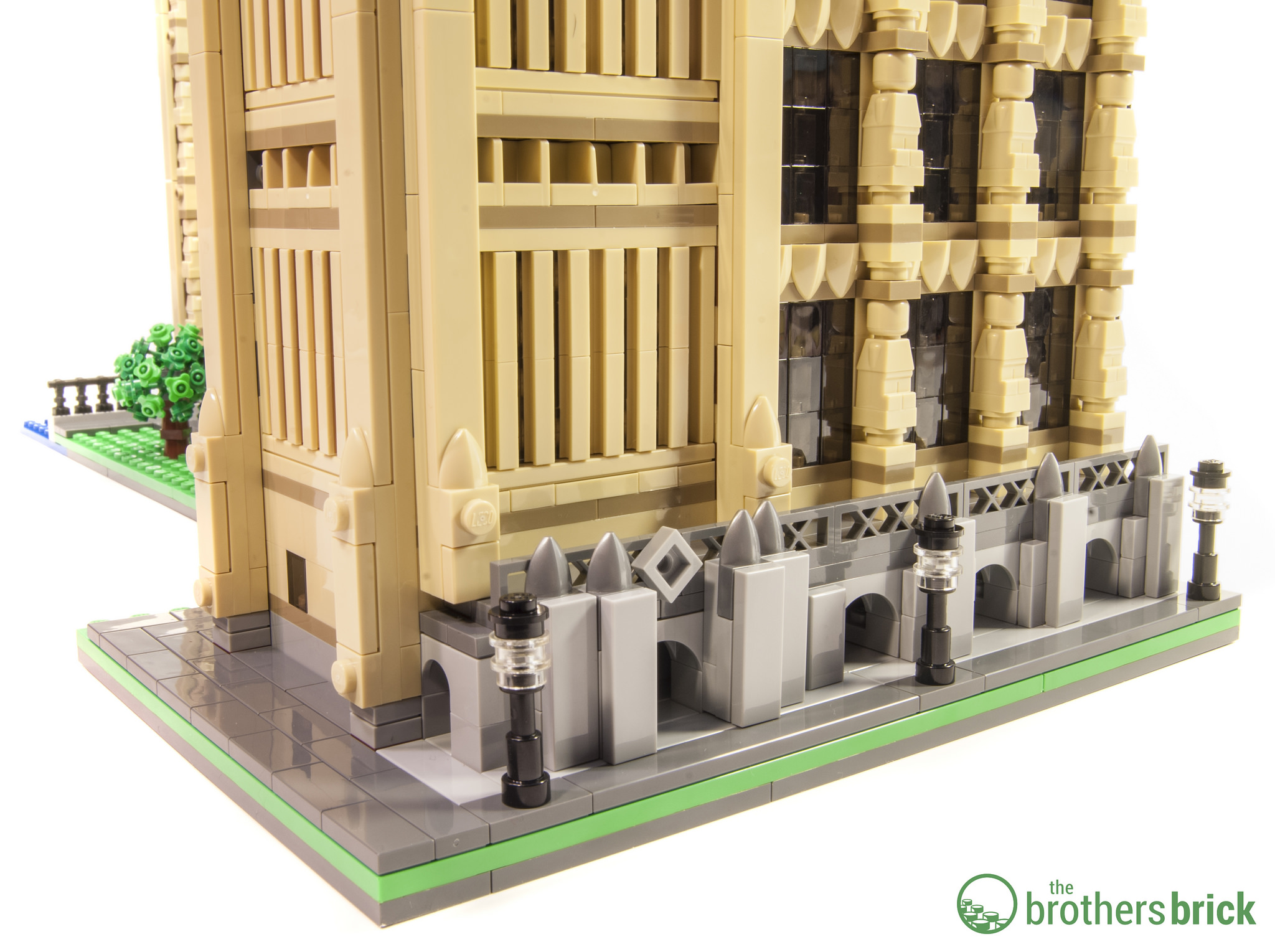 Overall, I enjoy the set, and recommend it. It is true that it’s a repetitive build process, making it considerably less enjoyable to build than some of the other big sets we’ve reviewed, like 75827 Ghostbusters Firehouse Headquarters, 76052 Batman Classic TV Series Batcave, or 42056 Porsche 911 GT3 RS. But the finished model’s exquisite detail and stately demeanor make it worth every minute. 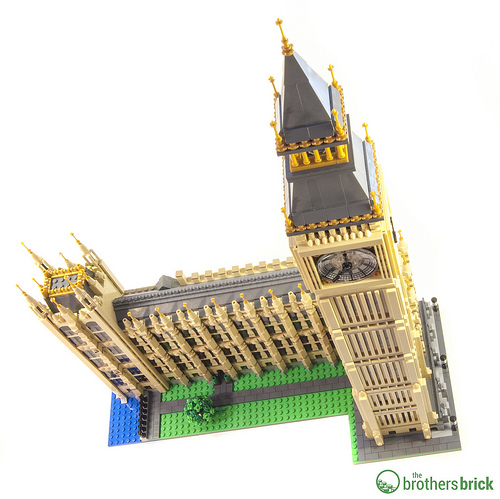