My passion for LEGO and gaming has resulted in quite an expansive arsenal of gaming weapons, and now I present the most massive of them all: the classic dual-tube rocket launcher from the Halo series in full 1:1 scale. I chose to build the most recent iteration featured in Halo 5: Guardians. It came down to small details when I chose this iteration: the orange highlights, the classic lettering of the “SPNKr” moniker, and the bulky grip section were all my favorite. 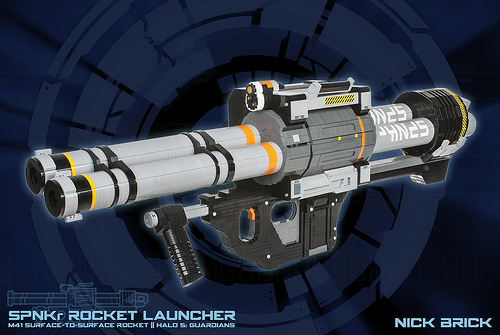 At 50.5 inches in length and weighing in at 24 pounds, it’s made from approximately 6,000 LEGO pieces, and initially I thought there would be no working features at all! However, there is one: you can open the launch frame and remove the launch tubes, just like how a Spartan would reload it in the game. Watch this demonstrated in this video:

The first challenge to overcome was designing the launch tubes. I chose to use 1×3 curved slopes arranged in a circle for the cylindrical shape, not only because it would be one of the sturdiest ways to build cylinders of that diameter, but also so that I could build in stripes and lettering with relative ease. Thankfully, the SPNKr’s design has a few cross braces in it, so I used those to my advantage to keep the tubes from bending too much and to keep them parallel. However, this caused the second challenge: using all those 1×3 curved slopes (about 1500 total!) caused the launch tubes to weigh in at 13 pounds, which would stress pieces in the frame. 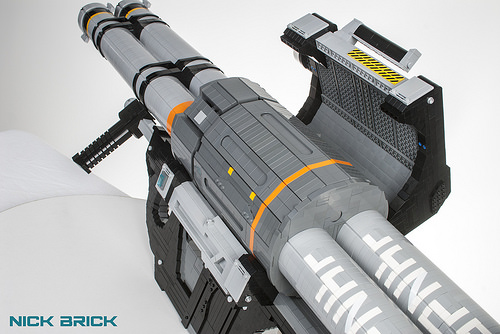 LEGO builders commonly use SNOT techniques for detail, and I employed them throughout this model. SNOT was also handy for the structure of the launch frame. Look closely at either side of the thumbhole, and you’ll notice that tiles were used in place of standard stacked bricks. By using pieces with studs both upward and on their sides and connecting them with plates and tiles, the frame essentially locks in place and is a stronger connection than basic brick stacking. Plates and tiles oriented along different axes allowed me to counter the bend along each axis. 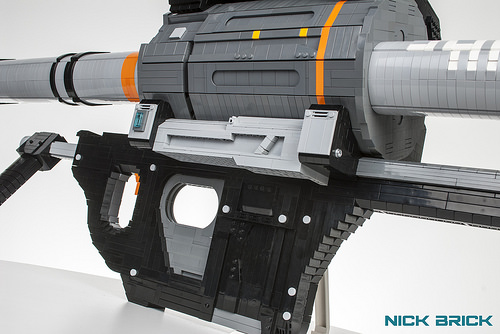 Finally, I’ll leave our readers with a sense of scale and, for the Halo players, a view of the Rocket Launcher that should be most familiar. 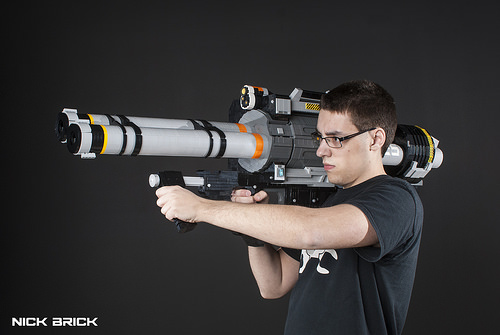 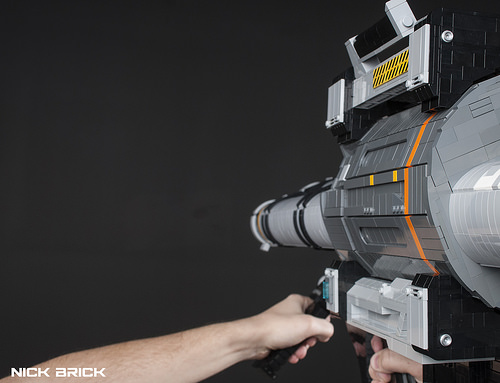