If you haven’t seen Captain America: Civil War yet, you’re doing yourself a great injustice. Not only does it show Batman V Superman how to do a hero punch-up, but it manages to be the best ensemble movie Marvel has done so far.

But today we’re here to talk about Iron Man and Captain America making an appearance in the brick, thanks to the talented hands of Tyler Clites. 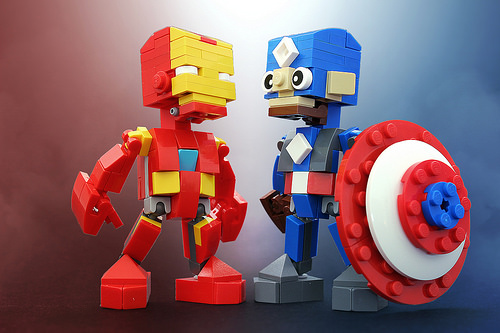 While I’ve never really taken to the CubeDude aesthetic (or, worse yet, the bastardizations that are Funko Pop figurines), I really like Tyler’s rendition of the characters. They’re enough on the chibi side to be cute without becoming bobble-headed messes.

Also notice the great use of the smaller ball joints (AKA Mixel joints) on the legs. Then pan upwards to see that the shoulders don’t use the same system. I think this build is also a great example of why the fan community likes more variations of small joints in type as well as colour.

Anyway, what team are you on? Team Iron Man or Team Cap, and did that change after watching the movie? Let us know below! And if you want to read more about it, I’ve actually reviewed Captain America: Civil War for my little South African site.