LEGO’s newest Ideas set, 21305 Maze, is available starting today. Jason Allemann, the Maze’s creator, has long been known known for helping out fellow fans by providing instructions to many of his models, and this time around, Jason has put together a special Maze website which hosts instructions several alternate maze layouts, and inspiration for even more. Jason has even created a motorized miniature golf-inspired maze (video below).

We got our hands on the Maze last month and had fun reviewing it, but we wanted to know what its creator had to say. Jason was kind enough to speak with us about the Maze, his design process, and how to create a successful LEGO Ideas project. 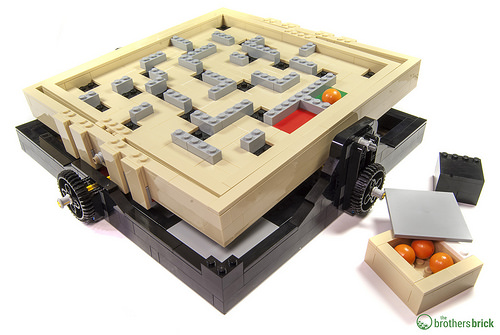 The Brothers Brick: We covered your original maze back in 2012. How did you come up with the concept to make a LEGO ball maze? 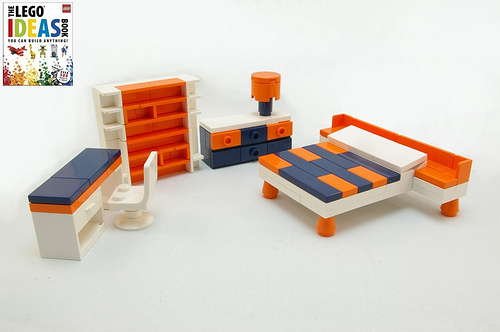 Jason Allemann: It’s funny where ideas can come from sometimes. For this one I was just browsing through flickr one day, and Deborah Higdon had posted this set of furniture which included a bookshelf designed using panel pieces. The moment I saw the bookshelf I thought it would be a great way to build mazes. I immediately started putting together some small, static mazes, but it didn’t take long until I was trying to make a LEGO version of the classic wooden Labyrinth maze.

TBB: What was the most challenging part of the design?
JA: The control mechanism for sure. How well it worked would make or break the play experience, so it was important that it be responsive enough. I worked through a few prototypes before settling on the final design.

TBB: The final product looks very similar to your original design. How closely were you able to work with the LEGO designers in polishing up the official set?
JA: I actually didn’t have too much input in the design process. The designer (Steen Sig Anderson) was able to reverse engineer my model from the original pictures and videos. He showed me an early prototype, explaining some of the changes he had made and why he made them, and I was amazed at the results. He really didn’t change the underlying control system at all, which was my biggest concern, and most of the other design changes made perfect sense. 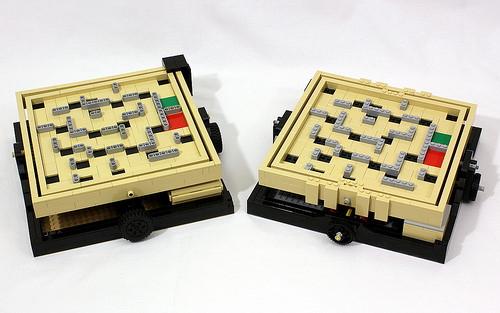 A comparison of Jason’s original design, left, and the official set. Image courtesy of Jason Alleman.

TBB: In what ways do you think the official set improves on your design?
JA: The overall strength and stability is far superior in the official set. I displayed my model in public a few times, and it didn’t take long for it to end up in pieces. Steen did an amazing job in reinforcing all of the weak points of my original design, so that it could actually become a viable LEGO set. He also simplified the mazes themselves. The holes are not quite as deep as in my original design, but the mazes are also a lot lighter as a result, which means the control system is a lot more responsive. I also really like the way he incorporated the ball container into the ‘locking’ mechanism. It’s a much more elegant design than in my original model.

TBB: In what ways do you think your original design was better than the official set?
JA: One thing I paid particular attention to in my original design was making the tilt range equal in each direction. A side effect of the changes made to the official set is that this is no longer the case, and the inner frame especially can be tilted in one direction a lot more than the other. The thing is, this doesn’t actually affect the game play, as the key to successfully controlling the maze is to make very small tilt adjustments. I could see this as being a bit off-putting upon people’s first experience with the maze though, as they are more likely to make large tilt adjustments early on, and notice the imbalance.
Regardless, I have designed an easy modification that can be made to even out the tilting for those that are interested.

TBB: I’m guessing the tan and black color scheme is to imitate the traditional wooden ball mazes. Did you play around with any other colors, either when you first designed it, or when LEGO was translating your design?
JA: I never actually did try out any other color schemes, and I’m not sure there was any reason I used black and tan other than it is a nice color combination.

TBB: What design tips do you have for fans who want to build their own maze layouts?
JA: So far it seems I always underestimate the amount of space it takes to create some specific layout I have in my head. Once you add the walls, holes and space to move the ball around the holes, you start using up space pretty quickly. I would just say experiment and see what works. I can’t wait to see what types of mazes people create.

TBB: Have you successfully navigated either of the official set’s maze layouts yet?
JA: Oh yeah, I actually completed the ‘standard’ maze on my first try after building the official set. I have had 4 years to practice on my own model though, and controlling the model is very much a learned skill. The more you practice the better you will get at it. 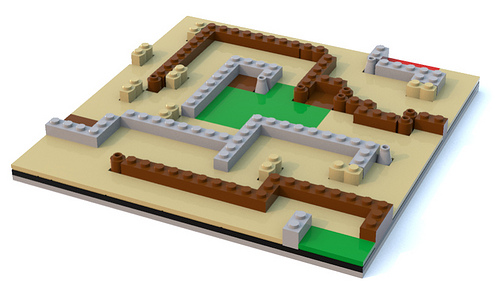 TBB: What was the process of working with LEGO Ideas like, to get to the requisite 10,000 votes? [needed for LEGO to consider turning a project into a set]
JA: For the first month I actively promoted the project wherever I could. I was lucky that some of the larger LEGO blogs (including The Brother Brick) liked the project enough to share it. I also sought out other communities that might be interested, including some traditional gaming forums. After 6 months or so I designed another themed maze for it, which I think helped renew interest in the project. After that I kind of just left it alone, and luckily it continued to receive a steady stream of support.

TBB: Any advice for other builders looking to make a successful LEGO Ideas project?
JA: I think the biggest challenge is just getting your project exposed to enough people that will be interested in it. So, find the people and communities that might be interested and promote it there. Build a great model and present it in a great way. Take good pictures of it. Make a video to showcase it if that makes sense. Give people a reason to get excited about it.

TBB: What do you have planned next?
JA: Well, I’m always building, so there is always something on the horizon. With respect to LEGO Ideas, I’m actually collaborating with another great builder on a new project right now. Hopefully it will be ready to post in a few weeks.