As my family left Japan in 1989 after 15 years there, one of the memories I carried with me was all the TV shows my brother and I had watched. While my own favorite was Ultraman, my brother preferred Kamen Rider (the “Masked Rider”). One of the best and most popular incarnations of the titular hero was the Kamen Rider Black series, which aired just before we left Japan, in 1987 and 1988.

Moko has been building various LEGO versions of Kamen Rider for at least the last 10 years — I first featured minifig versions of the characters way back in 2006 — and his latest Kamen Rider features a chibi version of our hero pulling a wheelie astride his iconic “Battlehopper” motorcycle. 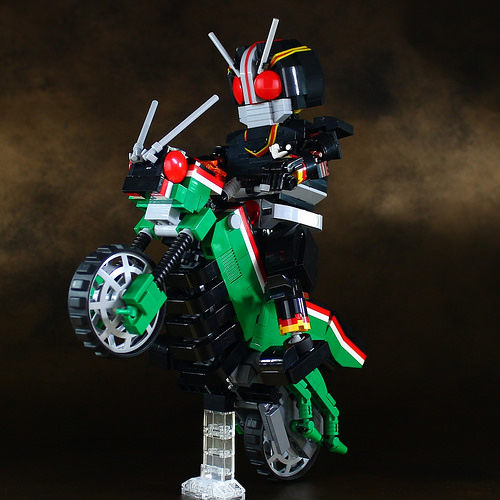 Kamen Rider himself is fully posable, and Moko says that this is his first attempt at a non-minifig scale motorbike. Moko makes great use of LEGO rubber elements in this build: The red and yellow lines on the character are built from rubber bands, and the motorcycle tires are tank treads on radar dishes. 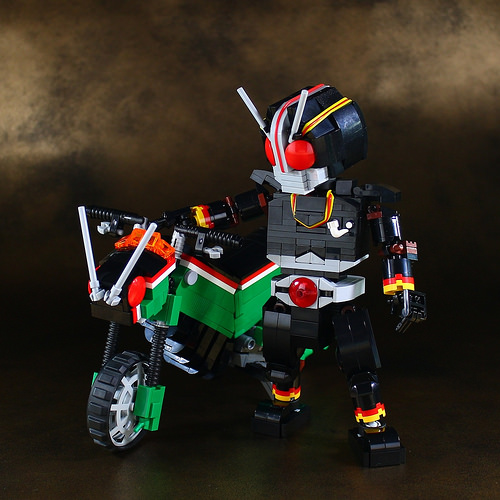 Moko says that the first Kamen Rider show he watched was the RX series that immediately followed Black, and he only watched Black later, but really loves the show despite its age — which, you know, makes me feel a bit old… You can see more photos on Moko’s blog (in Japanese).