The lifecycle of the xenomorphs in the Alien franchise is fascinating — from egg to facehugger to chestburster to a rapidly growing black monster. While we’ve seen many LEGO xenomorphs over the years, including a great minifig-scale version by TBB’s own Tim Lydy, but not too many other stages in the creature’s lifecycle (other than the amazing LEGO chestburster by the Arvo Brothers nearly 10 years ago). Tim has corrected this with a wonderful vignette featuring a facehugger leaping from its egg sack towards a surprised Colonial Marine. 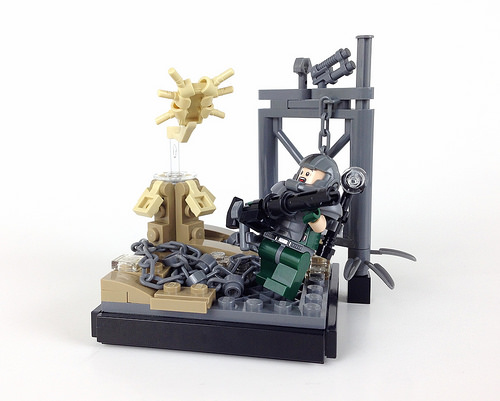 Tim uses minifig hands to represent the facehugger’s flailing arms, and suspends the jumping facehugger above its empty egg case with clear LEGO. The expression on the doomed marine’s face is priceless.