Carl Greatrix‘s Caterham 7 was recently revealed as the next LEGO Ideas set. The announcement was met with almost universal approval, mixed with some surprise that such an obviously adult-oriented and complex model had made it through the review.

TBB: So, you’ve got to be delighted about the news. How does it feel to have an official LEGO set coming out?
Carl: I’m obviously super-excited. It means that everyone who wanted one, will now be able to get one. The realization is slowly but surely sinking in — the fact there will be an official LEGO set, available in practically every LEGO shop around the world, it’s quite a humbling thought and feels like a huge achievement.

TBB: What made you decide to build the Caterham in the first place? Most of your followers will know you’re a bit of a petrol-head, but is this car a particular favourite of yours?
Carl: The petrol-head within has never died! I’ve had some real fun times in Caterhams on the track in my past years, and I felt it would make an almost perfect LEGO model. And at this scale I’d be able to get the details I wanted into it.
I had never planned on trying to turn it into an Ideas set. In fact I think it was around 6 months after building before I submitted the model to Ideas. The submission was solely due to so many requests at shows from members of the public asking how could they get one!

TBB: You’re well-known as a model designer for the LEGO video games. Any chance we’ll see a Caterham showing up as an Easter Egg in a forthcoming game?
Carl: No!…As much as I’d like to.

TBB: Do you have any advice for anyone pushing a creation on the LEGO Ideas platform?
Carl: Stay determined and try to keep the interest at a good level all along the ride to 10,000 votes. Don’t expect to just submit then sit back and do nothing! I had no idea how much hard work it was going to be. I had to become very pro-active in promoting it, although luckily Caterham loved the model too so were very keen to help however they could.

TBB: One final question — is it true the model was designed to Jack Stone figure scale?
Carl: Ha. I think his spies have misinformed you!
TBB: Thanks Carl, and congratulations once again.

I was so pleased for Carl getting through the Ideas review, I built my own little Caterham 7 to celebrate. And Carl, if you’re reading this… this is the color-scheme I’d love to be in your set! 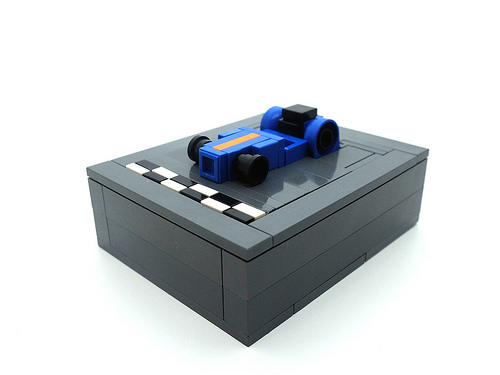 1 comment on “Interview with Carl Greatrix, creator of the Caterham 7 LEGO Ideas set”