In advance of our coverage from New York Toy Fair this coming weekend, LEGO has provided us with some details missing from previous coverage of the 2016 Ninjago line, including full product descriptions, higher-res images, and confirmation of a March release date. When LEGO had sets like 70605 Misfortune’s Keep and 70603 Raid Zeppelin available in mid-December to send us for review, we were actually expecting a January release, but January has come and gone somewhat to our confusion, so it’s good to finally have confirmation of the real street date.

Final product descriptions follow each image below, but be sure to click through to Flickr and check out the first full-res images of the 2016 Ninjago sets. 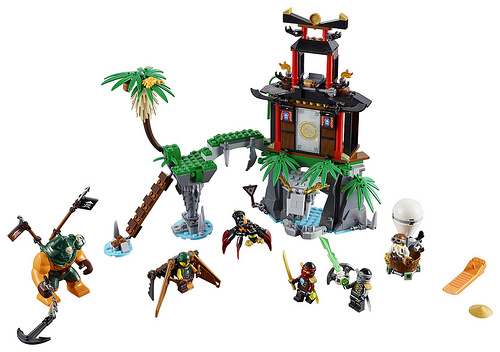 Mighty Dogshank is approaching carrying her huge anchor weapon. Fight back with Nya’s katana and drop coconuts on Dogshank from the tower and Sensei Wu’s hot air balloon. Watch out for Sqiffy’s pirate flyer and make the palm tree fall to knock him off the ladder. Hide out in the cave — and beware of the giant venomous spider roaming the island! Defeat the pirate invaders and free trapped Lloyd from the special Djinn Blade! 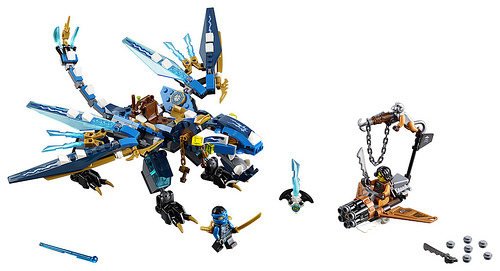 Jump into the dragon’s saddle and grab the reins. Snap the jaws and adjust the head, wings, legs and tail for awesome battle poses. Dodge Cyren’s harpoon hook shooter and the pirate flyer’s six-shooting rapid shooter. Fire the spring-loaded shooters to take down the flyer and then release Nya from the Djinn Blade! 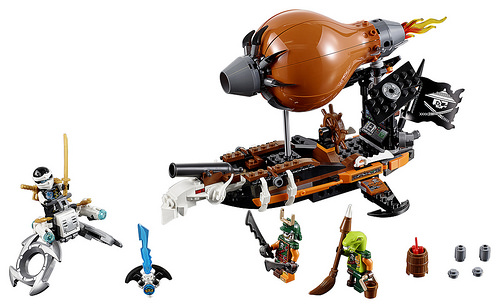 Swerve clear of the Zeppelin’s powerful cannons and dynamite dropped through the trap door. Fire the flyer’s elemental ice stud shooters and board the airship. Face-off against the Doubloon and Clancee to grab the Djinn Blade and free your fellow ninja warrior Jay! 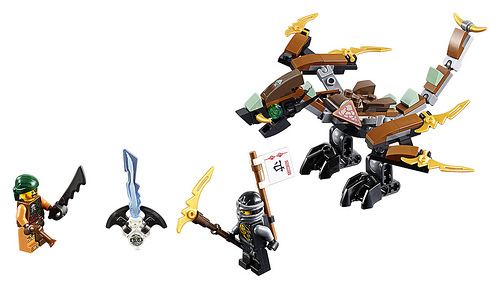 Pose the neck, wings and legs of the dragon and fly into attack. Defeat the sky pirate and free trapped Zane from the special Djinn Blade! 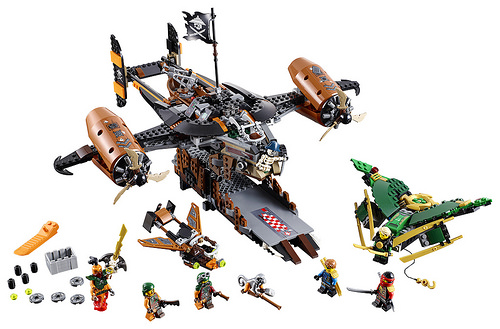 The evil Djinn Nadakhan and the crew of Misfortune’s Keep are threatening to destroy Ninjago. Soar sky-high with Lloyd’s booster jet and operate the winch to lower Jay into battle. Beware of Misfortune’s Keep’s hidden cannons, disc shooters and the pirate jet taking off from the launchpad. Can you help the Ninja to defeat Nadakhan and free trapped Wu from the golden Djinn Blade?

Target the sky pirate’s flyer with Kai’s bike’s hidden cannons/boosters. Dodge the flyer’s bombs and aim the elemental water cannon from Nya’s awesome bike. Take his flyer down then fold out Kai’s bike’s golden Ninja blades to attack. You must defeat Sqiffy and free Cole from the Djinn Blade!

Send up the drone to check out this awesome jet with dangerous blades, guns and loads of cool pirate details. And beware—the Sky Shark could drop dynamite or rotten fish at any moment! Then convert the drone into a jetpack for Lloyd and launch the Ninja hero into battle. Bring down the Sky Shark and fight to free trapped Kai from the Djinn Blade!

We’ll have complete coverage of all the LEGO themes on Saturday, so be sure to check back regularly over the weekend!