During the nineteen-fifties, rapid advances in aeronautical engineering meant that the top speed of fighter aircraft shot up from below supersonic to more than twice the speed of sound. For the U.S. Air Force, this huge increase in performance coincided with the introduction of a now almost legendary range of fighter aircraft, starting with the F-100 Super Sabre and ending with the F-106 Delta Dart, also known as the Century Fighters. Over the years I have built both an F-105 Thunderchief and a Delta Dart. Just after Brickfair Virginia 2013, a number of military builders including myself visited the National Air & Space Museum Udvar Hazy Center near Dulles Airport and, after seeing the museum’s Super Sabre, I wanted one, badly. 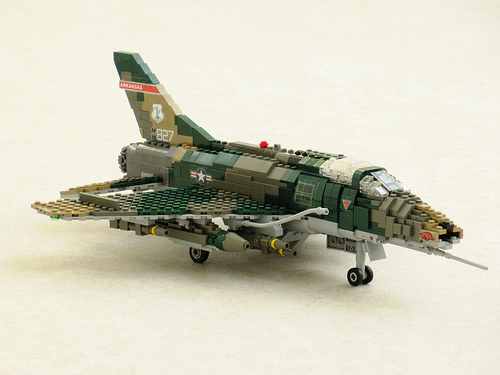 The trouble was, this is not particularly easy. I didn’t just want any old Super Sabre; I wanted one in Vietnam war era camouflage much like the one in the museum. I find the best match for the camouflage colours is dark tan, dark green (or Earth green, as LEGO calls it) and old dark grey, and the parts palette in all of these colours is limited. The jet also doesn’t have a particularly easy shape, with a slightly odd oval intake and curved fuselage sides. Then I got a bit side-tracked, building movie cars for a couple of years. However, after a lot of procrastination and head-scratching, it is finally done. The model represents an F-100D that served as a fighter-bomber aircraft with 184th Fighter Squadron, the ‘Flying Razorbacks’, of the Arkansas Air National Guard, late in the type’s operational career.