Those hardcore rock music fans will have already recognised this famous band recreated in LEGO by Andreas Weissenburg. They’ve been rocking since 1975 and have played with some of the biggest names in music: Julie Andrews, Elton John, Liza Minelli, Paul Simon. Of course, we are talking about Dr Teeth and The Electric Mayhem, the house band from The Muppet Show. 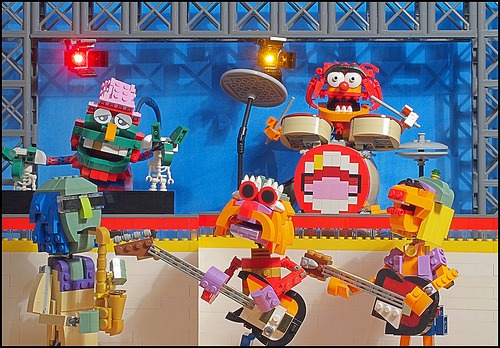 Andreas has built the original five members of the band: Dr. Teeth on vocals and keyboards, Animal on drums, Floyd Pepper on bass guitar, Janice on guitar, and Zoot on saxophone. There are lots of nice touches used to bring these characters to life, and the wild colours of the muppet characters certainly help with part selection in this case. My favourite is definitely Zoot – that nose looks perfect in LEGO. Plus everybody knows that the guy playing sax is always a hottie!

You can see close up views of the band members and other Muppets including Swedish Chef and Waldorf & Statler in the builder’s Flickr album.