I’ve never watched either Star Wars Rebels or The Clone Wars animated TV shows, but I’ve appreciated some of the minifigs and bought a few of the sets on discount for parts. I regret not picking up 75053 The Ghost when it went on pretty deep discount late last year, given the ship’s great design, reminiscent of bombers and naval patrol aircraft from World War II like the B-17 or PBY Catalina. I’m mildly consoled by the release of 75127 The Ghost, part of the latest wave of LEGO Star Wars Microfighters. 75127 The Ghost includes 104 parts and 1 minifig, and retails for $9.99. 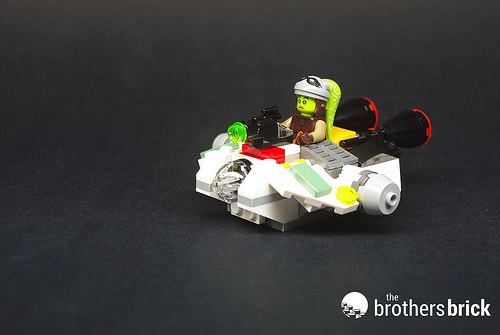 The Ghost is apparently operated by a Twi’lek named Hera Syndulla. The vehicle itself captures the design of the full-size ship nicely, with angled wedge plates for the sloping sides and 2×2 structures for the port and starboard docking rings. Various plates and tiles also evoke the little splashes of color on both the System-scale LEGO set and the ship in the TV series. 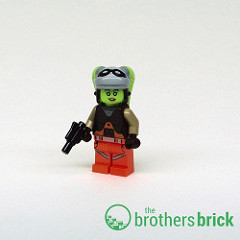 Like many longtime Star Wars fans, I’m a sucker for Twi’leks, who by now have made numerous appearances throughout the Star Wars universe, both in the movies (like Bib Fortuna, Oola, and Aayla Secura) and beyond. More LEGO Twi’leks is never a bad thing, so I love that the set designers included Syndulla rather than any of her human crewmates — she is after all, the owner and pilot.

Hera herself comes with a dual-sided head — the stern expression in the photo above, and the smiling expression shown to the right. The Twi’lek head tentacles are the same mold as on the Oola and Aayla Secura minifigs, with goggles printed on their top and printing down the sides of her green lekku.

One of the coolest parts in the set is the clear 2×2 dome on the front of the ship. It’s not the tall hollow dome, but an R2 droid dome in trans-clear for the first time. Naturally, I’ll be using it to build an R3-series astromech…

Overall, this is a fun little version of the large-scale set with a great minifig choice for only $10, so it’s easy to recommend whether you’re a fan of the TV show or not.

75127 The Ghost retails for $9.99, and includes 104 parts and 1 minifig. It’s currently available from Amazon.com (but only at third-party markups), and we expect it to be available from the LEGO Shop and elsewhere soon. LEGO provided The Brothers Brick with a copy of this set for review, but free LEGO from Billund guarantees neither coverage nor a positive review.