Contrary to the resource-strapped organization in The Force Awakens, the First Order in the LEGO Star Wars universe certainly doesn’t lack stormtroopers, helped along by new releases like the 75132 First Order Battle Pack, which accompanies the 75131 Resistance Trooper Battle Pack we also reviewed recently. This battle pack has 88 pieces, the usual 4 minifigs, and retails for the normal $12.99. 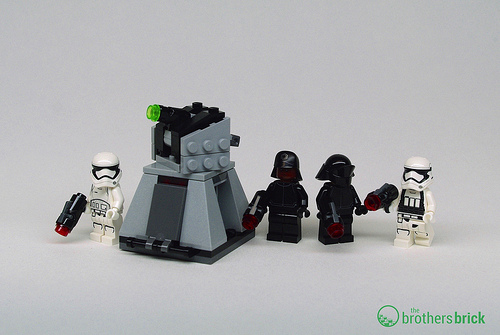 There is no weapon emplacement like the model in this set in the Star Wars canon. Nevertheless, it fits right into the LEGO Star Wars universe with its resemblance to the turbolaser emplacements on the Death Star’s surface. In addition to the stud-shooter turbolaser, it also includes two cool play features, with a control panel and presumably power cells. The pyramidal structure culminates in a 4×4 platform with a 2×2 turntable, to which the designers — in a fit of half-stud offset — have attached the 3×3 base of the turbolaser itself. 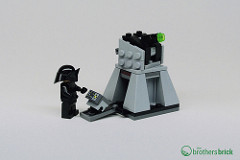 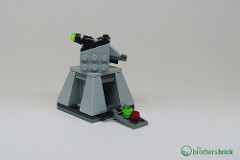 There’s not much to write home about here in terms of parts, with the exception of a nice set of four corner tiles, but I continue to argue that the non-minifig parts in battle packs are — for the price — bonus pieces you get for “free” along with the minifigs you really want.

The set includes four minifigs — a First Order technician, two stormtroopers, and a First Order crew member. Notably, one of the stormtroopers has torso printing as a heavy gunner, though all of the minifigs are given what I — feeling somewhat defeated at this point — acknowledge as the default weapons of all LEGO minifigs. Forever.

But as a protest, I’ve photographed them without their bulky stud-shooters. 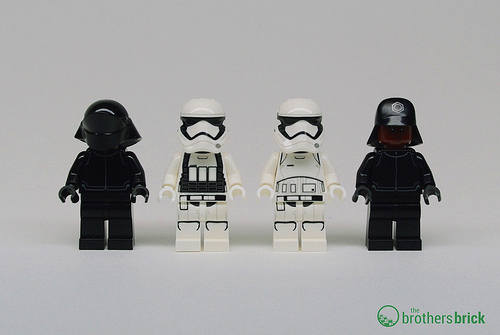 The torso printing on all four minifigs extends to their backs, including the unique print for the heavy gunner, with the straps from his harness wrapping around his shoulders. 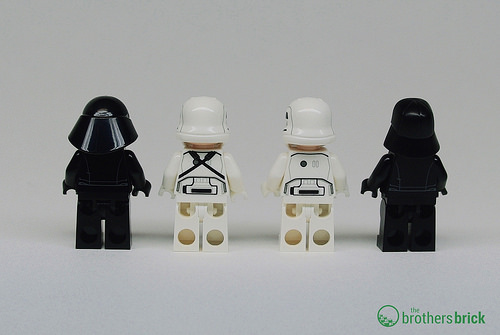 Given the source material, it’s no surprise that the minifigs’ heads are fairly generic, with three light-colored skin tones and one darker skin tone. As a longtime proponent of minifig diversity, I appreciate that LEGO has represented not just light-skinned people in the set. (Without getting overtly political, it is interesting that the lily-white Empire has turned into a rather diverse organization 30 years after the fall of Emperor Palpatine and Darth Vader — obviously a reflection of interesting story-telling decisions in a contemporary context by J.J. Abrams and his team.) 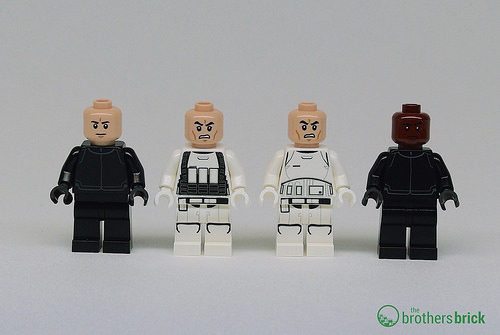 Ultimately, battle packs like this are perfect army-builders for those of us wanting to replicate the First Order (as well as the rag-tag Resistance, of course) in LEGO form. One generally expects a batch of fairly generic minifigs in a battle pack, so it’s quite nice to get four completely different minifigs — the new heavy gunner is a particularly excellent inclusion. While I do expect some hardcore army builders to be disappointed that they don’t get four First Order stormtroopers with which to replicate General Hux’s speech on the Starkiller Base, those of us with more modest means can appreciate the range of minifigs in this set.

I can wholeheartedly recommend this to every LEGO Star Wars fan, and expect these to fly off the shelves quickly.

75132 First Order Battle Pack retails for $12.99 and is available from Amazon.com, the LEGO Shop online, and elsewhere. LEGO provided The Brothers Brick with a copy of this set for review. As proven by my write-up of 75137 Carbon Freezing Chamber, free LEGO from Billund does not guarantee a good review…