Although there still seems to be a supply chain issue here in North America, where new 2016 LEGO sets are rather hard to come by, our friends in Billund have sent us another batch of sets that we’ll be reviewing here on The Brothers Brick over the next week or two. LEGO continues to expand its range of minifig-centric Battle Pack sets with 75133 Rebel Alliance Battle Pack, alongside the 75131 Resistance Trooper Battle Pack I reviewed over the weekend. The set has 101 pieces, including 4 minifigs, with a price of $12.99. 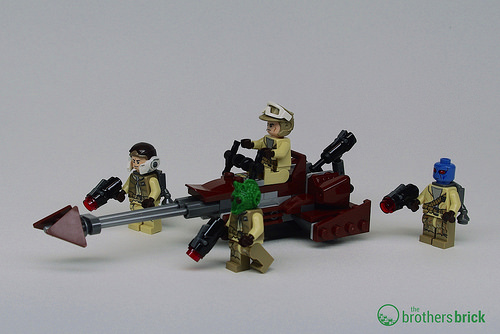 The set includes four minifigs and a brown speeder bike. The speeder bike has a larger tail end than the classic Imperial scout speeder bikes seen in Return of the Jedi (and numerous LEGO sets over the years), though it may be one that has appeared in something like the Star Wars Rebels animated TV series. The speeder has a stud-shooter on the back, with a spot for a second minifig to serve as a rear-facing gunner. As I said about the “sort-of” Gian speeder in the Resistance Trooper battle pack, any vehicle or structure in a battle pack basically just adds free brick, so I have no complaints about the nice brown parts and technical bits in various grays that constitute the speeder.

The minifigs in the set are a motley crew of Rebel Alliance fighters — two humans, a Rodian (like Greedo), and a Duros (like Chachi De Maal in the Mos Eisley Cantina and Cad Bane from The Clone Wars TV series). Each gets a stud-shooter gun, about which I have made myself clear previously (they’re fish-mouth guns, I tell you!). 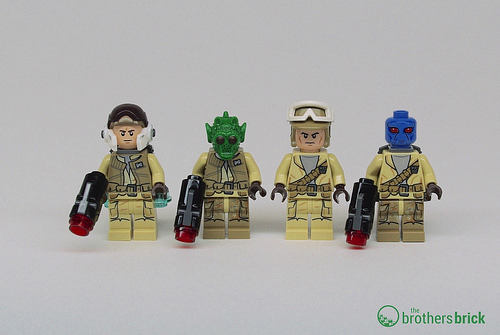 Two of the Rebel troopers get cool — albeit non-canonical — jetpacks, with a new 1×1 printed tile I expect to see put to good use. I also believe the jetpack piece itself is new, though I may simply be failing in my inventory search on Bricklink (the minifig inventories are still pending as of this writing). 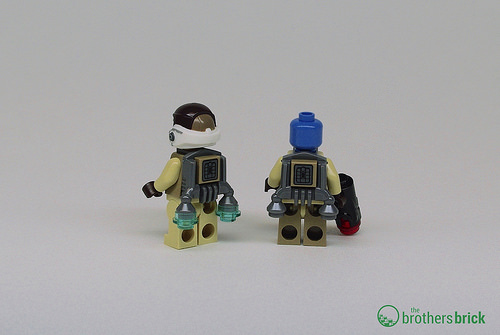 The four minifigs are built from two torso prints and two leg prints in dark and light tan, combined differently on all four minifigs. 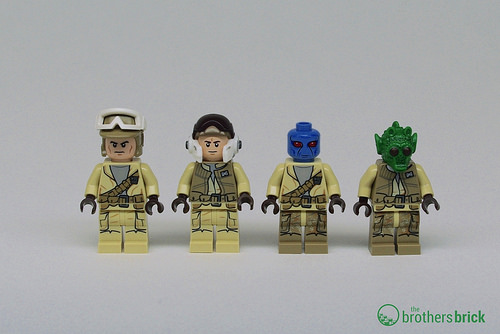 The two leg prints share printing on the hip piece that connects to the torso regardless of color. The two humans share the same face, and the heads are single-sided. The human Rebel with the jetpack gets a Rebellion flight helmet in a new color and printed design, while the other human just has the Hoth-style headgear. The Rodian is a brighter green than Greedo and other previous LEGO Rodians (Onaconda Farr and Wald), while the Duros minifig head is a paler shade of blue than the bright blue of the Cad Bane minifig. Sadly, we don’t get green or light blue hands for the non-human Rebels, since the torso assemblies are shared.

Both torso designs are printed on the back, with a printed tan hood hanging over the back of the bandolier on those torsos. 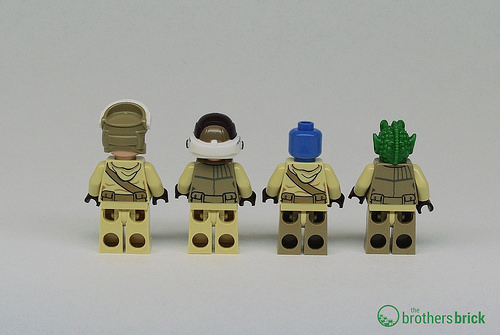 I cringe to admit that I like this battle pack so much that it inspired a furious “figbarf” of epic proportions as I assembled a dozen more ragtag Rebels to match these. Naturally, I also had to expand my complement of Cantina aliens with the excellent Duros head. Once you set aside the stud-shooter guns and give them proper weapons (official LEGO Star Wars weapons or not), these are truly fantastic minifigs with some stellar parts.

I heartily recommend 75133 Rebel Alliance Battle Pack for Star Wars, sci-fi, and military builders alike, and I plan to buy at least a couple more of them myself.

75133 Rebel Alliance Battle Pack retails for $12.99 and is currently only available in the US from third parties on Amazon.com. We expect the set to become available on the LEGO Shop, Target.com, and elsewhere soon.