Pink as a car colour is usually seen as either for girls or just as plain wrong. In the fifties, however, when bright colours were all the rage for American cars, pink was often a factory option. It’s particularly associated with Cadillacs, with Elvis Presley having owned several in that colour and Bruce Springsteen penning a song called Pink Cadillac. My latest model is a 1956 Ford, however. 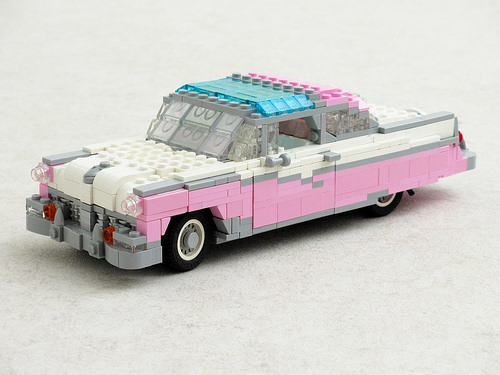 I’ve been collecting bright pink parts for a while now, for a different project, but this weekend decided to use some of it for the fantastically named 1956 Ford Fairlane Crown Victoria Skyliner. It’s full of fifties chic: it has a two-tone paint job, a glass panorama roof over the front seats and a so-called continental kit on the back, with a spare wheel and extended bumper. Building in pink added to the fun, as this involved a fair bit of improvisation to account for the still limited parts palette.