As part of their January 2016 assortment, LEGO released a number of new minifig-centered battle pack sets as army builders for The Force Awakens, including 75131 Resistance Trooper Battle Pack. The set has 112 pieces, including 4 minifigs, with a price of $12.99. 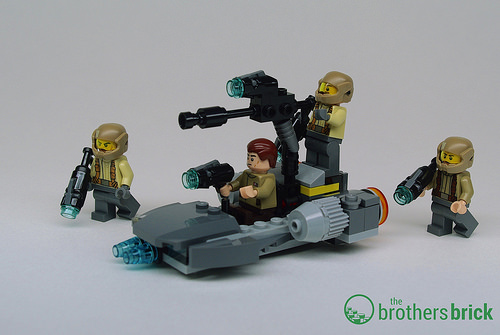 There really aren’t spoilers to worry about with this review. Still, I’ve managed to write what are probably far too many words for such a small set like this, so hit the jump.

The speeder itself looks vaguely similar to the Gian speeders seen on Naboo in Episode I. I’ve seen The Force Awkens twice now, and still I don’t have any clear recollection of these troopers or this speeder. Reviews elsewhere have suggested that a version of this speeder without the big gun does appear on the Resistance base. But I must have blinked when it was on screen and missed it.

Battle Packs are really about the minifigs, though. LEGO seems to value minifigs at $3-4 each, assuming their pricing for Collectible Minifigures is any indication. So I’ve always felt that the non-minifig bits of a battle pack, like the speeder in this set, are just “free” brick you get with the 4 minifigs. The speeder is built from useful plates, brackets, the highly useful studded gun, and a few curved slopes, so I can’t complain.

The set’s 4 minifigs are a Resistance officer with three troopers. The officer has a new torso print, and has swept-back hair in a new color. One of the troopers has the dark tan torso previously seen on Resistance minifigs in 75140 Resistance Troop Transporter and 75103 First Order Transport. The other two troopers have new torsos in regular tan. All three have the cool hinged helmets also seen in the Resistance Transporter. 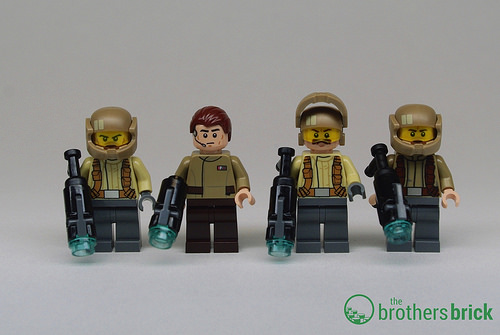 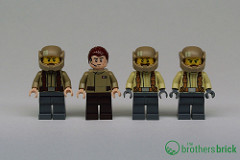 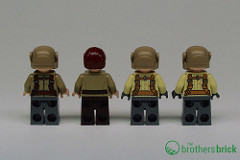 Removing the helmets, we see that all three of the troopers have different faces, though none of them have dual-sided heads with alternate expressions. I like the dude with the very bushy mustache. 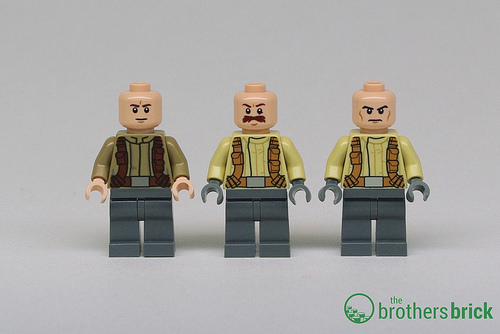 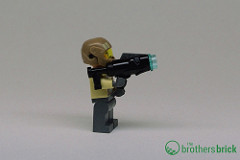 My biggest complaint about this set is the minifigs’ weapons. Rather than Star Wars blasters (which, granted, most of us probably have enough of to arm the entire Resistance), the set designers gave all four of the minifigs handheld stud-shooters as weapons instead. With a black tap piece stuck onto the end of the stud shooter, we get a stud-shooter rifle, I suppose, but to me it looks like a fish with a gaping mouth.

Fish-guns and minimal screen time for the subjects aside, this is a pretty great little set, with useful minifigs for Star Wars, general sci-fi, and military builders alike.

75131 Resistance Trooper Battle Pack retails for $12.99 and is available from Amazon.com, the LEGO Shop, Target.com, and elsewhere.