The University of Chicago Laboratory Schools is a private school affiliated with its namesake. Donors recently provided funding for a new arts wing designed by architects FGM and Valerio Dewalt Train. As a thank you gift to the donors (Mellody Hobson and her husband George Lucas), the school commissioned alumnus and faculty member Dave Kaleta to build a LEGO replica of the new facility. 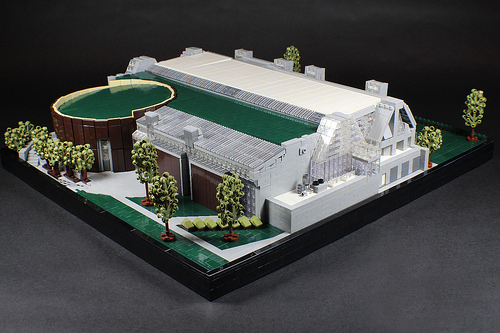 Since the gift was planned to coincide with completion of the building, Dave was given access to blueprints and even the building site itself. Even though the gift was intended for the Lucas household, Dave tells me that he resisted requests to include a minifig Yoda somewhere in the display, since the donors themselves had insisted that the new building be named in honor of American photographer Gordon Parks (1912-2006).

See more photos in Dave’s album on Flickr, along with his build notes and description of key architectural details.