In addition to 21028 New York City (which I reviewed here a couple of weeks ago), LEGO has also just released 21027 Berlin and 21026 Venice as part of a trio of new city skyline sets.

In contrast to the $60 price tag for NYC, both Berlin and Venice retail for $29.99, and I’ll be reviewing these two smaller sets together today. 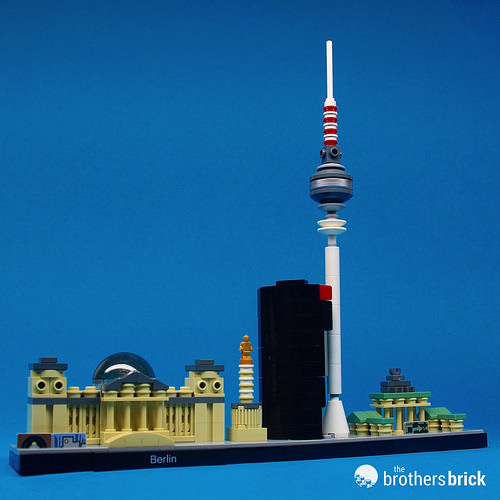 Like all other LEGO Architecture and Ideas sets, both sets come in a sturdy storage box with a perfect-bound instruction booklet that provides background and history about the subject. We’ve come to expect that at this point, but I only bring up the instructions because — unlike most other recent Architecture and Ideas sets — the booklets are bilingual. Berlin’s booklet is in both English and German, while Venice’s booklet is in English and Italian.

The Reichstag building is a structure with a fascinating history. Built in 1894 and severely damaged by a fire in 1933 and Allied bombing during World War II, it was partially repaired/renovated in the 1960’s under the East German regime and again in 1999 as the home of the reunified German nation’s parliament, or Bundestag. The renovations completed in 1999 added a glass dome, and the LEGO set reflects the building’s modern profile. Meanwhile, the Brandenburg Gate looks rather like a miniaturized version of the LEGO Architecture set released in 2011. 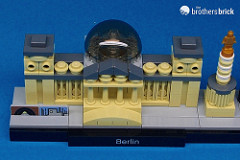 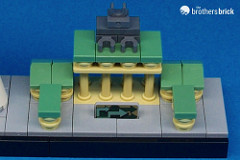 Construction techniques in the Berlin set are not as complex as the Empire State Building or Freedom Tower in the New York City set, but the BahnTower does include a bit of studs-out construction. The parts selection is limited to small, architecturally useful pieces — 45 of the set’s 289 pieces are tan 1×1 round plates. Still, there are a trio of pretty cool pieces — printed 1x2x1 panels for three sections of the Berlin Wall.

The Berlin Wall and the glass dome on the Reichstag building are great examples of the juxtaposition of traditional and modern architecture in this set, and Berlin’s skyline wouldn’t be complete without the 368 meter Berlin TV Tower. But I really dislike the black obelisk of a structure that’s supposed to be the Deutsche Bahn Tower. Although I’ve never been to Berlin, a quick image search online seems to show that the BahnTower’s facing is blue-green glass, not black like genuinely black skyscrapers such as Columbia Tower here in Seattle or Sears Tower in Chicago. I would love to have seen what the set designers could have done with trans-light blue on something like a black core. 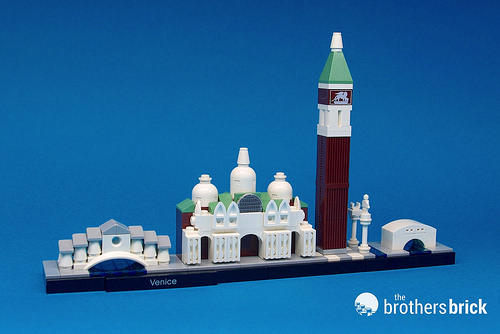 Given the scale and subject matter, there’s not a lot of complexity at play in this set, from a technique standpoint. In fact, the instructions are clearly geared toward people who don’t build with LEGO on any kind of regular basis, because there are repeated graphics urging you not to get confused between the various white 1×2 bricks in the set (ones with a single Technic pin hole, with two Technic holes, and with two studs — gosh, my head is about to explode!). Most steps only add one LEGO element, so there’s very little room for error. Nevertheless, the booklet includes this graphic I’ve never seen in other sets.

The only structure with any significant complexity is St. Mark’s Basilica, which makes extensive use of studs-out (and studs-in) building techniques, including the 2×2 round tile with grill printing that serves as the cathedral’s large central window.

Again, parts are limited to architecturally useful small pieces, mostly in white and brown to represent the city’s marble and brick. The winged lion design atop St. Mark’s Campanile is on a printed 2×2 brick, though the reverse side is not printed with la Giustizia.

Although my younger brother has visited Venice a couple of times, I’ve only been there in Assassin’s Creed II. Thus, like many other gamers out there, my reaction to the architecture of Venice is generally, “I’ve climbed that” or “I’ve jumped off of that” (Achievement Unlocked: High Dive). I also understand that there are replicas of St. Mark’s Campanile at Epcot Center and the Venetian Hotel, so those who’ve been to Orlando or Las Vegas instead of the real Venice may feel somewhat similar…

Regardless, all the structures in the set are world-renowned, instantly recognizable architectural masterpieces sadly at risk of subsidence (poor urban planning) and/or rising sea levels (poor global planning). So rather than a reminder of a pleasant trip to Italy, this set will sit on my desk as a stark warning about global warming.

I’ve seen the LEGO Space Needle sold at the Space Needle gift shop, and the LEGO Guggenheim in the museum’s store in New York. Given the simplified instructions and appropriately bilingual booklets, I strongly suspect that these sets are largely marketed to tourists who want a memento of their travels. There’s nothing wrong with that, and I certainly enjoyed building New York City, the Imperial Hotel in Tokyo (since I was born in Tokyo), and other LEGO Architecture sets myself. But removing the personal connection with the set’s subject leaves the set as a fairly high-priced item for architecture aficionados and other collectors — build once and display, or build once and store in the sturdy box. In other words, these are not for the average AFOL whose primary purpose in acquiring more brick is to grow his or her own collection in order to build MOCs.

As with New York City, I can heartily recommend this set to anybody who loves the cities and their architecture, but not as a means to get more brick for building. Each set is carefully designed to evoke the entire city rather than just a single building, and thus I’m hoping that LEGO continues this line with other iconic cities of the world (such as London, Paris, Tokyo, Hong Kong, and more). The small scale and relatively low cost for the number of buildings you get — compared to the “full” size, single-structure LEGO Architecture sets — make for a potentially very interesting series.

21027 Berlin includes 289 pieces and 21026 Venice includes 212 pieces. Both are available from the LEGO Shop for $29.99. The LEGO Group provided The Brothers Brick with review copies of these sets.