Around the time you’re reading this, I’ll be sitting in a theater watching the first possible showing where I live of Star Wars Episode VII: The Force Awakens. As much as I’ve enjoyed building the new Rebellion/Resistance vehicles from The Force Awakens — 75099 Rey’s Speeder, 75102 Poe’s X-wing and 75140 Resistance Troop Transporter — my favorite vehicle from the Star Wars universe remains the iconic Millennium Falcon. With 75105 Millennium Falcon, Han & Chewie’s trusty ride (and yes, home) gets a bit of a facelift for the new movie. 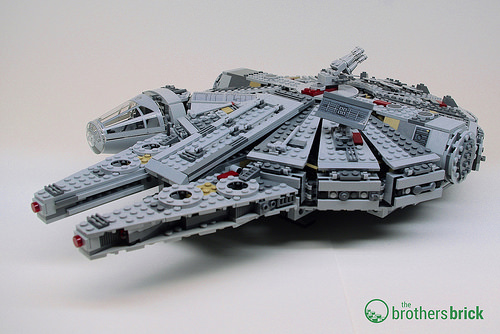 Full disclosure again: With my Prequel-induced LEGO Star Wars Dark Ages, I haven’t personally built the various Millennium Falcon redesigns released since the godawful original in 2000 (which I did like at the time). So, apologies again in advance if I miss any key comparisons with the versions from 2004 and 2011. That said, it’s also going to be hard avoiding comparisons with the wondrous UCS Millennium Falcon from 2007 — the only true minifig-scale Falcon ever released (and a set that managed to break through my Star Wars ennui).

As with the X-wing, spoilers here are doubtful, but hit the jump anyway for the full review.

As the largest of the Force Awakens sets so far, the Falcon’s 1,329 pieces come in 9 numbered bags with a 165-page instruction booklet.

The first bag provides the parts for the Falcon’s deck and its Technic substructure. Those who’ve built the UCS Falcon will be familiar with the endless Technic beams, pins, and plates that form this type of build. Things don’t really get interesting until the second bag, which starts laying out the interior, which I’ll discuss in more detail later. The build would be very boring indeed if you didn’t add these interior details as you went along. 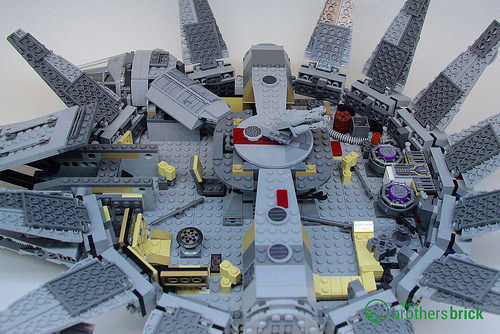 The first stickers show up as details on the hyperdrive, and yes, everything other than the cockpit canopy and holoboard is stickered.

Han and Chewie join the party at Bag 3 about 50 pages in, as we continue to build up the interior structures and outer hull of the Falcon. Finn comes aboard in Bag 4, with more additions to the interior and exterior hull structure. The rounded outer hull is constructed of a series of segments that connect via clip plates. You end up constructing twelve of these segments, which does get a bit repetitive after a while. (This segment-based construction appears to be the same as the 7965 Falcon from 2011.)

The top starts closing over the falcon’s interior with the parts in Bag 6, continuing into Bag 7, with the upper and lower quad cannons appearing on page 112. 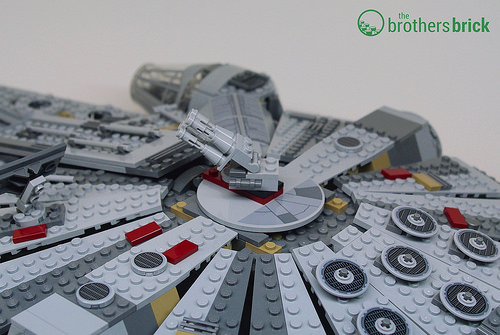 The landing gear assemblies are disappointingly small, even by 2000 standards (more on that complaint later).

Rey shows up in Bag 8, which is full of plates and greebly pieces for the upper hull. The top of the Falcon is built from twelve pairs of wedge plates, with each segment connecting to the upper portion of the side segments built earlier. Even though many of the “roof” segments are mismatched light and dark gray, it was nice to see that there’s an even match of left and right wedge plates of each color.

The ninth and final bag provides the pieces for the large panel above the concussion missile tubes, along with all the parts for the front mandibles.

Given the realistically repetitive nature of the source material, the build felt a bit tedious, alleviated by the various interior details included along the way.

Star Wars sets tend to be gray plate/tile/brick parts packs, and 75105 Millennium Falcon is no exception. The set includes 1,329 pieces, 6 minifigs, and a droid. At $150 in the US, that’s a pretty steep price for just over 1,300 pieces — mostly gray, innumerable plates.

Other than the printed canopy — which appears to be the same as the previous OT Falcon from 2011 — there really aren’t any new or interesting parts in this set, though I always appreciate more 4×4 round plates with 2×2 round holes in the middle (there are 4 in the set).

On discount, this would actually be a great way to bulk up on useful gray brick, but at full price it’s hard to recommend on value for money.

The most important difference, of course, is that Han seems to have replaced his sensor dish — ripped off inside the second Death Star by a careless Lando Calrissian — with a lower-profile rectangular sensor panel. 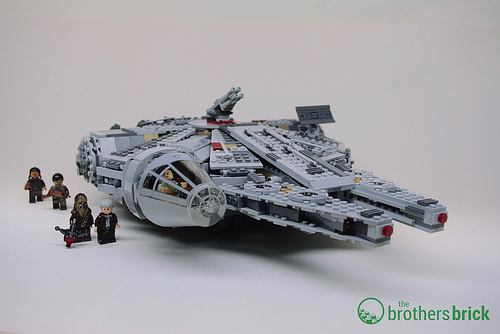 The upper hull folds out to reveal the interior. The rear of the ship includes a detailed engine, cargo area, and two bunks. 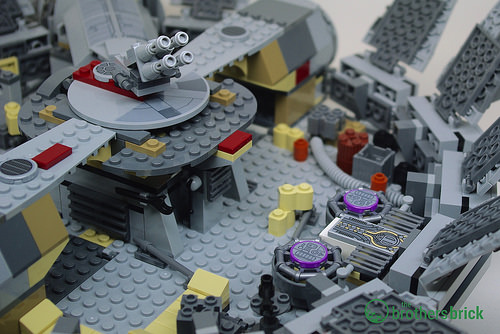 The front of the ship includes the seating area seen in the Original Trilogy with a holoboard for playing Dejarik (the seat cushions are stickers, but the holoboard is a printed round shield). Finn should probably let the wookie win. 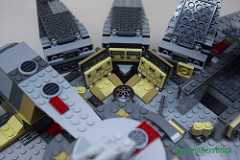 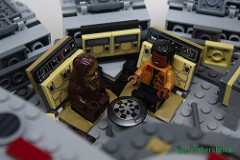 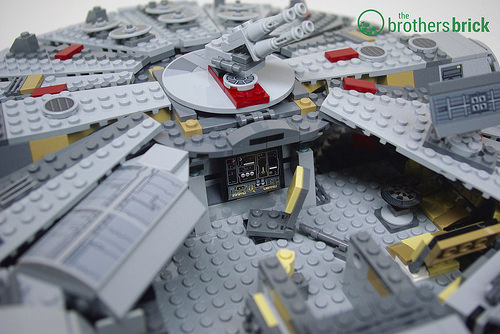 Other than as a playset, the main play feature is that the upper quad cannon opens and you can put two minifigs inside. 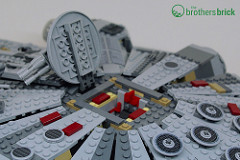 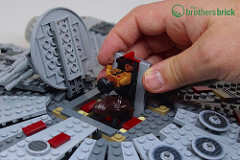 Those circular plates I mentioned earlier make for a great improvement to the look of the four maintenance access bays on the mandibles compared to the 2×2 tiles on the 2000 and 2011 versions, and the 3×3 Technic disks on the 2004 version. In a use of flick-fire missiles that actually works, you activate the missiles through the two forward maintenance bays. 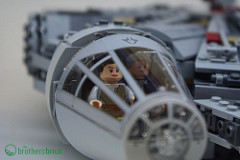 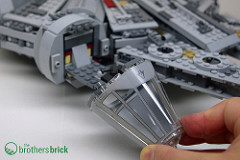 My biggest complaint about the ship is how low it sits to the ground. The loading ramp does raise and lower, but what’s the point when Han would have to crawl in order to get to it? The lower quad cannons also rest directly on the ground, since they’re the same height as the landing gear. 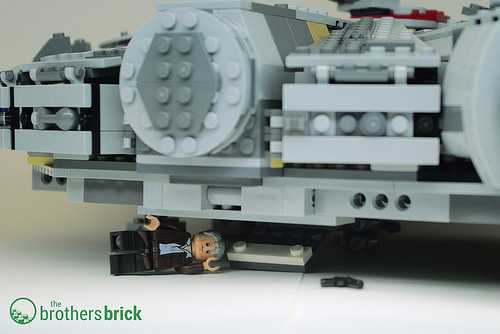 While a marked improvement over the 2000 version of the Millennium Falcon with large round panels from the then-recent UFO theme, the differences from the most recent non-UCS Falcon appear to be minor. But as a UCS Falcon veteran, I have to bemoan the compromises the designers were forced to make in order to keep this set a reasonable size — short landing gear, too-small mandibles, large “dead” areas on either side that could have been turned into pop-out escape pods, repetitive or absent greebling, and so on.

The set includes 6 minifigs — Han Solo, Chewbacca, Rey, Finn, Tasu Leech, and a Kanjiklub gang member (according to the LEGO Shop product info) — along with BB-8 the droid. 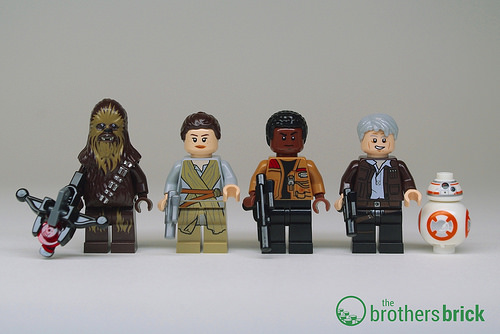 The Rey minifig is the same as the one in her speeder set. Han gets a great new leather jacket to distract from his gray hair and wrinkles, while the ageless Chewie gets highlights and silver printing on his bandolier. All of the human characters have standard blasters, but Chewie also gets a new bowcaster. While arguably an improvement over the repurposed crossbow, I’m not entirely sold on including a stud-flicker in the accessory — it just makes it rather huge. 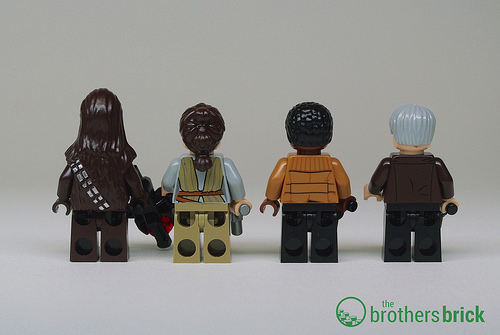 All of the Rebel Alliance/Resistance minifigs (except Chewie, of course) have double-sided heads. Rey and Han are granted both stern/angry and happy faces, while poor Finn is apparently mad and hopping map. 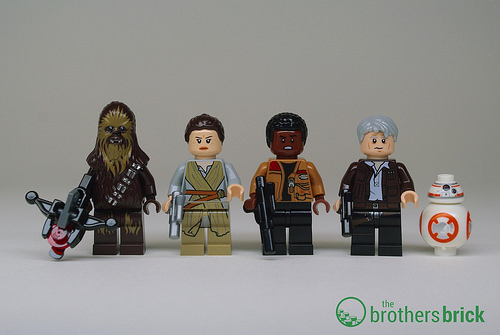 I particularly like the two mysterious characters identified by name only. I’ve always been a proponent of minifig diversity (being of the “yellow = light-skinned” school of thought), and it’s great to have two more “non-light” characters. In terms of the torso and leg printing, like the minifigs from Rey’s Speeder, I can easily see the parts from these figs in both a castle or post-apoc context. 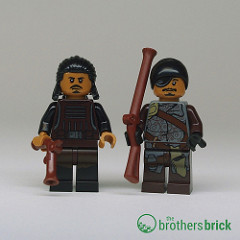 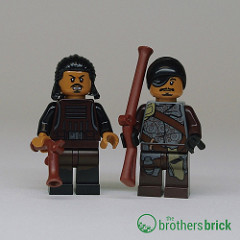 The stars of this set are the minifigs. If you want “old” Han, this appears to be the only set you’ll be able to get him in for the foreseeable future. Every one of the minifigs is useful beyond Star Wars. And if you didn’t buy the 2011 Falcon, this is a great way to get this key ship as a display model. So if, like me, the Force has reawakened in you and you’ve remembered what fun Star Wars can be, by all means pick up this set.

But I can’t recommend this set at full price from a pure parts standpoint — there’s not enough variety or novelty to warrant the cost at $150. If you’re looking for a cost-effective way to get bricks to expand your collection in order to build your own designs, this isn’t the set for you.

75105 Millenium Falcon is available from the LEGO Shop online

for $149.99 and Amazon.com (though as of this writing it’s back-ordered until the new year from LEGO and only available from third-party sellers on Amazon).