We’ve gotten hold of a case of January’s Series 15 Collectible Minifigures, thanks to LEGO. Series 15 is the first “regular” series since early in 2015 when Series 13 came out. Since then we’ve gotten Simpsons Series 2 and the Halloween-themed Series 14. And this series is shaping up quite nicely, with a broad range of excellent minifigs. The key color this time around is orange, like Series 4.

As these show up in stores, be sure to check out our feeling guide for the blind packs to help you find a full set. 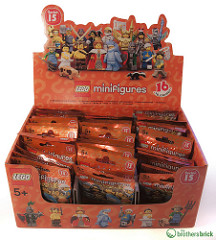 Since we got a full case, we’re able to provide a breakdown of the figures we got: 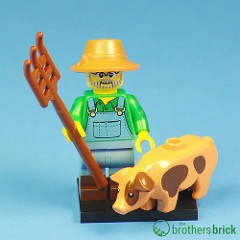 The Farmer wears light blue overalls over a green shirt, and gives us that great wilted straw hat which debuted with the Series 11 Scarecrow, but this time in medium dark flesh and without printing. He also sports brown boots, the first appearance in this review of LEGO’s new double-molded legs, alleviating the awkward printed-on boots from previous series. These double-molded legs have only shown up in the most recent wave of sets. Now that the boots are a separate color of plastic, the seam is perfect and uniform, even filling the stud holes in the back of the legs. The Farmer carries a pitchfork and is accompanied by a spotted pig. The pig is the same mold which has been around since 2010, but the printing is unique to this one. Annoyingly, there’s no way to attach both the pig and the farmer to the minifig stand at the same time, since the pig must straddle three studs to have clutch. 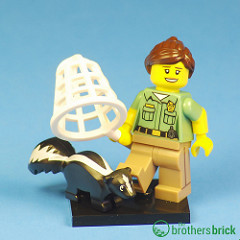 The Skunk Catcher is some some sort of animal patrol or park ranger, evidenced by the arm and chest badges and sand green shirt. She sports a short sleeve shirt, which debuts LEGO’s new double-molded arm technique. Like the Farmer’s boots, the seam is flawless and doesn’t leave weird gaps the way printed sleeves did. Her dark tan pants also have a brown stripe down the side. She comes with an old Fabuland net, which has always looked ludicrously oversized with minifigs, but makes sense for her prey. The skunk is new, and is totally cute. 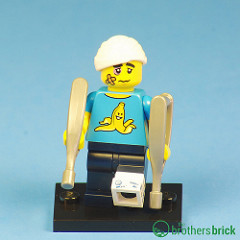 The Patient has had some bad luck lately, having a broken leg, a bandaged head, a black eye, and chin wound. The cheeky banana peel on his shirt suggests the origin of his misfortune may be his own clumsiness. In any case, he comes with a pair of brand new crutches, which are a spiffy new piece. The bandage wrap on his head is also new. The cast is a doubled-mold dark blue and white leg piece, and is adorned with some remarkably intricate printing. You can even make out a few of the names, and a smiley face with the word “Oopsie!” 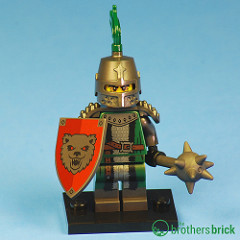 We’ve had quite a few medieval characters in previous series, but this has to be one of the best. The Knight’s tunic is full length printing, and he’s outfitted with dark grey boots, again the dual-injection mold. Under his helmet, the Knight’s face betrays an almost orc-like visage with a large protruding tooth. The

shield is new, being taller than the old triangular shields, and has a grip similar to the current oval shields. It’s almost exactly the same size as the new Nexo Force shields.

Likewise, the mace is new, consisting of a dark pearl silver Bar 3L and a new spiked ball, which is cast in hard rubber. The Knight’s pauldrons are a separate piece, but not new. 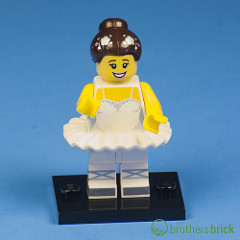 The Ballerina is a simple fig as far as this series goes. The most obvious feature, of course, is the new tutu piece, which is regular ABS plastic and fits over the hip piece quite nicely. Her slippers are silver printing, and the dress is nicely printed both front and back with silver highlights. The hairpiece has appeared in a few sets previously, but is this time adorned with small silver and white flowers. 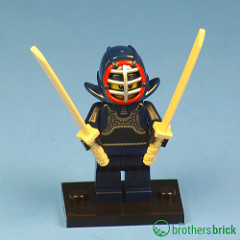 The Kendo Master wields two wooden practice swords, or shinai. These are LEGO’s samuari katana in tan. The facemask made its appearance in Ninjago, but is very nicely printed here with silver and red details. The torso has some subtly ornamented practice armor, and the legs have near invisible black-on-dark-blue detail printing. 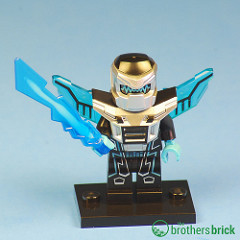 The Winged Robot Warrior is an interesting sci-fi character. There are no new pieces here, but everything is very nicely printed. The torso is printed with cool detailed azure and silver armor lines. The armor piece and helmet are both black with large silver highlights, and the trans light blue wings have black detailing. The Robot’s sword is dual-injection molded with a white swirl inside the trans medium blue blade. Under the helmet is a solid black head with an azure electrical pulse for a face. 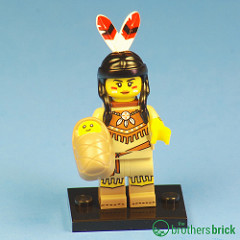 This Native American Woman has double-braided hair, a piece LEGO has used for Native Americans since its 1997 Western line. The feathers first appeared in that same line, though this time they have very nice red and black printing (on one side). The woman’s dress is lovely and detailed, with a very cool fringed border on the boots and arms. Both combine double-molding with printing to achieve the effect. She also holds LEGO’s first true child minifigure. The infant is a single piece, with a yellow face and eyes and mouth printed on. The back of the infant conceals an anti-stud, and is cleverly designed to fit on a minifig neck bracket to hold snugly against the woman’s back. 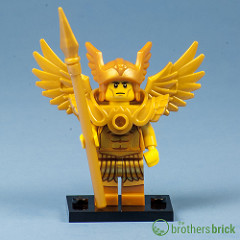 This winged warrior god is almost entirely pearl gold, with only a yellow head and arms/hands, and will make a great golden statue for an ancient temple creation. The pearl gold torso has gold and brown printing outlining an armor breastplate. The shoulder armor appeared in a large Chima set previously, but it’s nice to have a more cost effective way to get it, because it really is cool armor. The wings on the back aren’t new either, having appeared in pearl gold in a pair of Elves sets. The winged helmet, however, is a brand new and makes this figure a great Mercury or Hermes stand-in. He also comes equipped with a solid pearl gold spear. 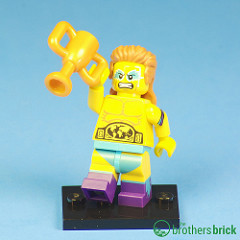 Live out your LEGO pro wrestling fantasies with this macho 80’s wrestler. Adorned with purple boots (with snazzy blue lightning bolts) and wearing a huge printed-on championship belt and blue speedo, the wrestler is as corny as he is awesome. The hairpiece is a proper mullet, so at last I can make a great MacGyver minifig. The wrestler also naturally comes with a championship trophy cup. 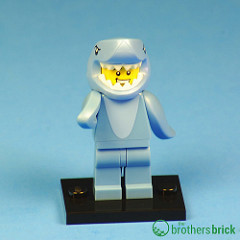 Ok, so I’m aware that people in animal costumes is a recurring theme in the collectible minifigure line, having already brought us minifigs dressed as gorillas, lizards, bunnies, chickens, bumblebees, pigs, unicorns, and plant monsters. But nothing will convince me that this guy in a shark suit isn’t supposed to be that infamous Katy Perry Superbowl backup dancer and internet meme, Left Shark. It’s just too perfect and dorky looking. The minifig head is the only one in Series 15 to be double sided, having a sweaty, distressed face on the other side. You can tell he didn’t spend enough time last night learning Katy Perry’s dance moves. 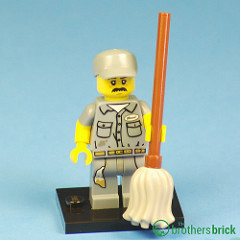 This humble worker is just what your city has been needing. We’ve had a plethora of firemen, police officers, gas station attendants, chefs, construction workers, and even garbage attendants, but until now your buildings’ floors were unmopped. The Janitor sports a a sand blue uniform and sand blue short-brimmed worker’s cap previously seen in blue in Series 9’s Plumber and white in Series 10’s Painter, and has short sleeves courtesy of the double molded arms. And, of course, he carries a mop. The mop handle is just a standard Bar 6L with Stop Ring but the mop head is a new part. The hole for the handle goes all the way through, allowing it to be threaded into a bar, and the bottom cleverly hides some little nobs which serve as an anti-stud, giving the part clutch. 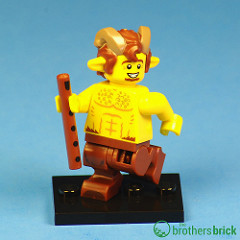 The Faun is a very fun little figure. The most obvious feature are the new digitigrade legs. They’re nearly the same size as regular legs, coming in about 0.5mm shorter than traditional minifig legs. They bend with a similar motion to regular legs, though they lack the anti-studs on the back, so a digitigrade minifig can’t sit down on studs the way a traditional minifig can. The legs also do not bend forward as far as regular legs, only moving about 30 degrees forward, but with a full range backward. The Faun’s hair is a new piece, being similar to, but not the same as, the Series 14 Gargoyle hairpiece. It’s a brown piece with painted yellow ears and dark tan horns. The flute is a Bar 3L with printed details. 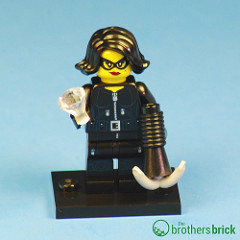 This is my least favorite of this series’ figures, simply because there’s nothing overly exciting or new here. The burglar’s torso and pants have a subtle dark-blue-on-black print, with some silver highlights for zippers. Her black hairpiece was previously only available in dark orange as the Black Widow’s short hair. She comes with a grappling gun made of a megaphone and grappling hook. It is worth noting that this is the first time the grappling hook is available in light bluish grey. Of course, she also comes with a giant diamond. 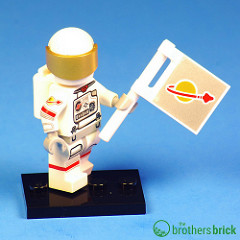 Here’s one for all of us Classic Space fans. The Astronaut is a contemporary/near future astronaut suit, quite reminiscent of Mark Whatney’s suit in The Martian. The minifig is pure white with the exception of light bluish grey hands, and has silver, black, and red printing for the suit. In a great nod to fans and LEGO’s history, the arm and chest patches are both Classic Space logos. And, just to up the ante, the Astronaut waves a Classic Space flag, printed on a gorgeous silver field. I’m going to need a lot of these guys. 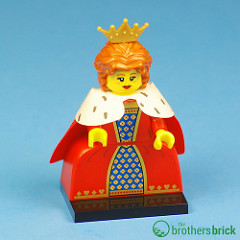 Looking incredibly regal, the Queen is adorned like Queen Victoria with a large flowing skirt and enormous bustle. The skirt is an entirely new leg piece. It has a pair of pegs just like the top of traditional leg pieces to mate with the minifig torso, and the bottom has an anti-stud footprint identical to a 2×4 brick. This makes finding the Queen in the blind polybags quite easy, since this is a much larger piece than anything in the other figures. The Queen has two capes. One is a 3-hole wrap-around cape in red, and the other is a shorter version in white with printed black flecks for an ermine fur effect. I believe the dark orange hairpiece is new, having a bun with tight hanging curls in the back, and a small hole to fit a plume, or in this case, a tiara.