Our week of LEGO Star Wars reviews continues today with 75102 Poe’s X-wing Fighter from the Force Awakens. Poe Dameron and his T-70 X-wing starfighter have featured prominently in all of the teasers and trailers for the new movie, so there doesn’t seem to be much risk of any spoilers in this set (that, and it’s been out in stores since September). 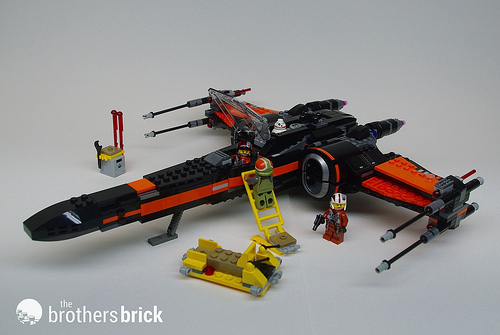 Nevertheless, I’ll go ahead and bury the actual review below the fold, as I did with yesterday’s review of 75140 Resistance Troop Transporter.

Full disclosure: I’ve only ever owned one other System-scale X-wing, the original 7140 X-wing from 1999. I apologize in advance if I miss any key comparisons with the 2004, 2006, or 2012 redesigns (dark post-Prequel, post-fleshie years in which I had no interest in Star Wars).

Poe’s X-wing comes in 5 numbered bags, with a 120-page instruction booklet. You start with the generic Resistance pilot, ground crew staff, and ground crew equipment, followed by the first bit of the X-wing’s main body. Sixteen steps in, you’re already starting to build the Technic mechanism that will enable the S-foils to open and close.

Things get interesting again after you open the second bag, around step 40, when you start building the X-wing’s nose. The long nose is built around a Technic core, with 1×2 jumper plates attached by Technic half-pins to a series of axle/pin connectors. The exterior sides of the nose are subtly angled using hinge plates. 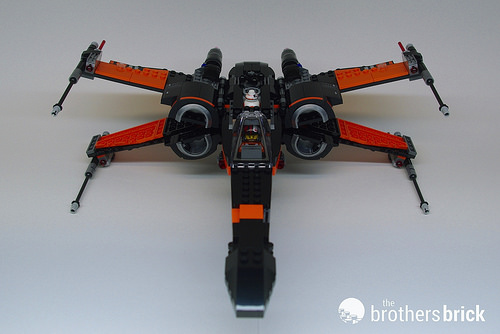 The nose cone connects via Technic axle to the end of the Technic core, with a 2×4 tile securing it to the rest of the nose via half-stud offset on a jumper plate attached to the core.

We then return to the S-foil mechanism and the remainder of the X-wing’s main hull through the third bag and step 89. The first stickers show up at step 83 — and yes, all but the X-wing canopy is stickered.

Speaking of the canopy, mine appears to have been mis-molded by a fraction of a centimeter, and the canopy would not close properly. I reported this to LEGO Customer Service, who requested proof of purchase via a code on my instruction booklet, and quickly sent out a replacement. The canopy is gorgeous, and appears to be essentially a miniature version of the canopy in the UCS X-wing sets. 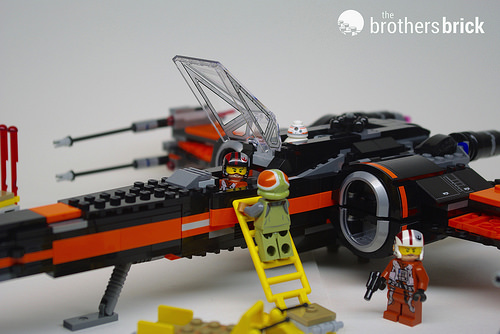 In Bag 4, we finally get Poe himself, along with BB-8, at which point we begin building the wings. All four wings are mostly basic plates, slopes, and tiles, with an articulated joint on the rear of each wing to attach rubber bands for the opening/closing mechanism. The end of each wing includes a 1×4 flick-fire missile brick, but I’ll come back to that when discussing the finished model. 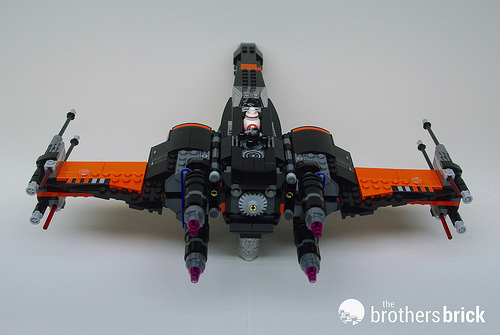 Technic axles hold the wings in place, and once all four wings are attached, you wrap rubber bands around the articulated joints. Building the four wings does inevitably get a little repetitive, since the wings alone are two full bags and nearly 40 pages of instructions.

Overall, it was a fun build, with some rather interesting techniques for the nose in particular. I also always enjoy interior Technic mechanisms, since I’m not much of a Technic builder otherwise and enjoy learning new techniques for working play features.

Poe’s X-wing includes 717 pieces, 3 minifigs (plus a droid), and retails for $79.99 in the US. This is a typical price for Star Wars sets of this size, but always worth noting that you get more brick for the buck in non-licensed sets.

I’m writing this review more than three months after the set’s release, after new (to me) parts have started appearing in 2016 sets like 21304 Doctor Who and the Resistance Transporter I reviewed yesterday. Given that, the lack of interesting new parts — other than the fantastic new X-wing canopy — is mildly disappointing.

Similarly, I don’t use my black LEGO very much, so the huge amount of black pieces in this set doesn’t work well for my personal building preferences, from a parts perspective. Still, I do like orange, and there’s a good amount of orange for all the accents and highlights on Poe’s X-wing.

It would be hard for me to recommend this set at full price for the bricks alone, and given that the set is starting to become scarce and creep up in price, you’re unlikely to find it on discount to buy as a parts pack.

Where this set shines is as a completed X-wing. The Halloween color scheme works beautifully, and the sleek angles of the nose are especially lovely. That said, the “real” T-70 X-wing has a slope down the nose, as well as a tapered angle along the sides, and it’s a little disappointing that the LEGO X-wing lacks this downward angle.

With rounded curves, the engines also look great, particularly with the S-foils closed. 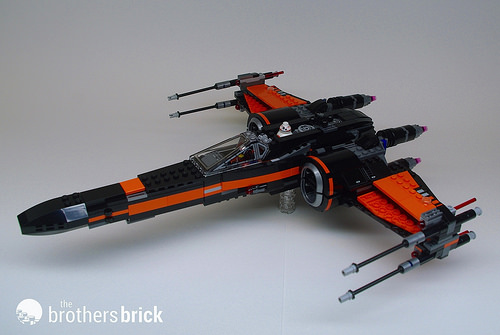 Naturally, the S-foils do lock in attack position, by turning the knob behind BB-8. Turning the knob flips the lever between each pair of wings from horizontal to vertical, forcing the wings open against the force of the rubber bands holding them together. I have to admit that forcing LEGO pieces to scrape against each other due to friction from rubber bands grates on my nerves a bit… 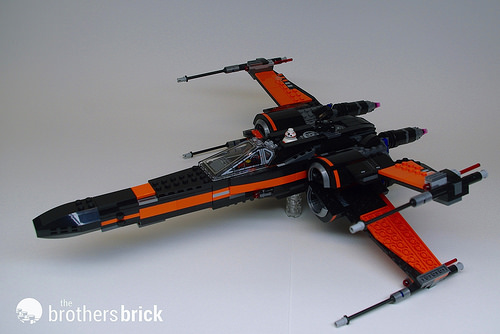 Similarly, those blue rubber bands (clearly visible in the rear shot earlier in this post) certainly detract from the overall look. Even more so, the four flick-fire missile bricks on the end of the wings make the ends look far chunkier than they should be — an easy mod to remove them, though.

The set includes three minifigs and a droid — Poe Dameron, an unnamed Resistance pilot, a non-human ground crew member, and BB-8. As great as I think the X-wing itself is, I love these minifigs. (To be fair, these may be the first Star Wars figs I’ve bought in ten or twelve years, so the contrast with those older figs is fairly high…) 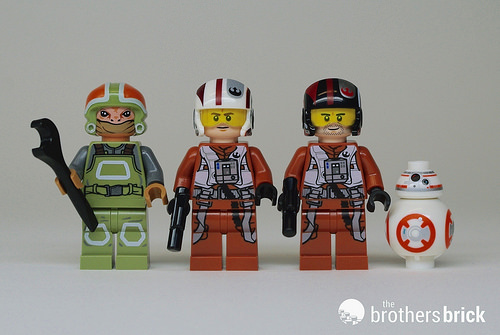 All three minifigs have printing on their backs. 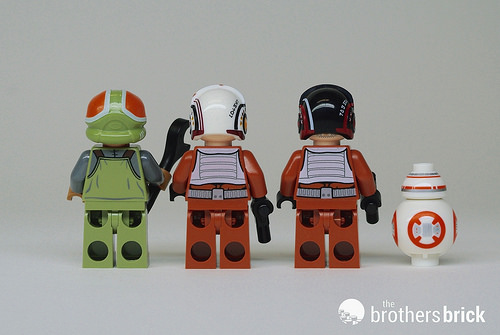 The pilots’ helmets are stunning, with detailed printing all around and a trans-yellow visor built in. Any readers out there care to translate the Basic/Aurebesh on the helmets? 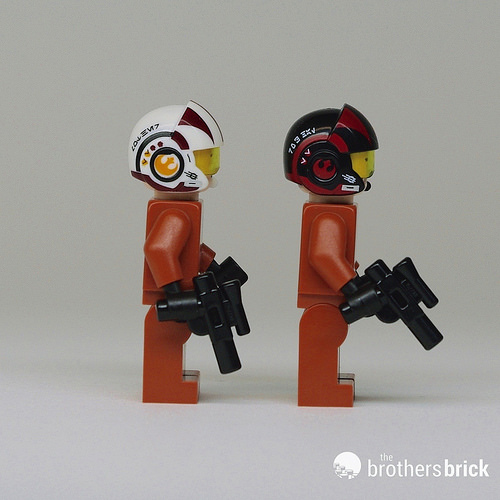 The intervening years since I last bought Star Wars sets — with the improvements to minifig printing LEGO has made — results in very strong contrasts with the pre-fleshie figs from that first era of LEGO Star Wars. Perhaps it’s also that so much of the last 12-15 years of LEGO Star Wars has focused on the Prequel Trilogy and (more recently) Expanded Universe. But I think these are objectively great minifigs. The alien ground crew member in particular is interesting, with parts that would fit well in just about any near-future or sci-fi context.

Despite my aversion to black LEGO parts, fleshie minifigs, flick-fire missiles, and rubber bands, this is a great set. It’s sturdy, swooshable, and sleek, with all the functionality you’d expect from an X-wing. And with stunning minifigs, I can heartily recommend this set to even the most casual of Star Wars fans.

75102 Poe’s X-wing Fighter is available from the LEGO Shop online for $79.99 and from Amazon.com (though as of this writing only from third party sellers at significantly above MSRP).