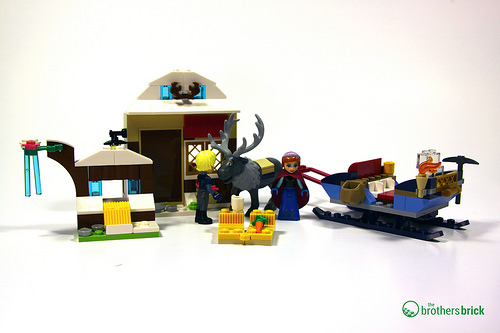 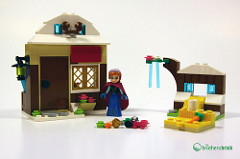 Oaken’s Trading Post is a fairly simple facade with the register and box of Medium Azure skis (great color for skis!). I do like the approach for carrots. This set doesn’t use the traditional pre-molded carrot but rather uses uni-kitty’s horn in orange with 1×1 with flower edge in green. I like the effect. The orange uni-kitty horn previously came in Elsa’s Sparkling Ice Castle as Olaf’s carrot nose.

The little hay bale/tree seems somewhat out of place, but does provide Sven something to eat, which is important for this particular reindeer.

When it comes to building the sleigh, it’s an overall good design. It’s sturdy and well scaled for the two mini-dolls and Sven. It’s most definitely not screen accurate by any stretch of the imagination, but based on a quick image search, might come closer than the other Frozen toys currently on the market. I don’t like the bright magenta on the sleigh. It feels out of place. The color is used as a highlight on the Trading Post and features prominently on Anna, but just feels too much on the sleigh. 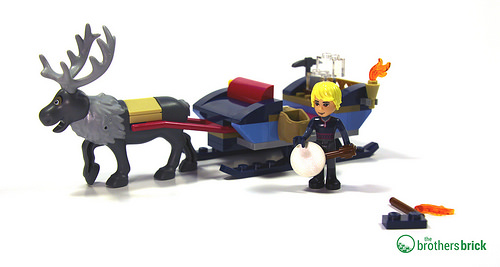 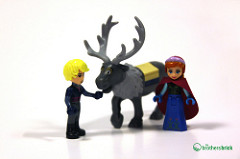 Let’s talk about Anna, Kristoff, and Sven. Anna’s printing on her dress and torso are spot on, and I really like the cape. Her hair-piece feels out of place with the rest of the doll. The hair-piece’s printing is off and not as precise as the rest. Kristoff, to me, doesn’t look like his character, and that’s by no fault of the set. The character is a big, burly, blond ice cutter. That doesn’t translate well to the mini-doll style. He does have a new pants-mold with back pockets.

I really like Sven. His whole personality is captured well. The molding is the usual hard plastic, with soft plastic for his antlers. I would have liked LEGO to include a 2×2 modified brick with a curved top or something to put into his back, like the horses come with the 1×2 brick and the plate to fill their back. The set only provides you the parts to make his blanket.

This set is well worth a buy. The parts selection is decent and this is the best way to get yourself Kristoff. But really, you should purchase this set for Sven.