It’s time to travel to Discworld and enjoy this fantastic series of characters from the works of Sir Terry Pratchett, brought to us by Pate-keetongu (Eero Okkonen). Eero started these shortly after the death of Pratchett in March this year. His first build was a large-scale creation of his favourite Discworld character, Archchancellor Mustrum Ridcully (back-row, far left in the photo below). 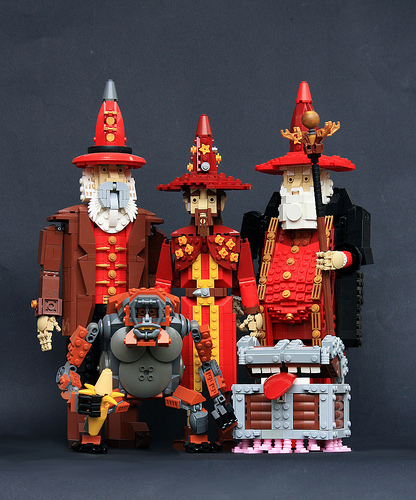 The Archchancellor, Professor of Unusual and Cruel Geography, Dean, Librarian and The Luggage.

If you’re not familiar with Terry Pratchett, he was the author of a series of 41 comic fantasy books that take place in the Discworld, a flat circular world that rests on the backs of four elephants who are standing on the back of a turtle.

I simply must point out a few of my favourite parts, although it is hard to narrow this down to only my top three. In no particular order: the Archchancellor’s ‘winged’ beard;  bananas used to represent the peeled banana skin held by the Librarian; and the dark red windscreen used as the Luggage’s tongue! Well one more… look below, Commander Vimes toes are minifigure legs! 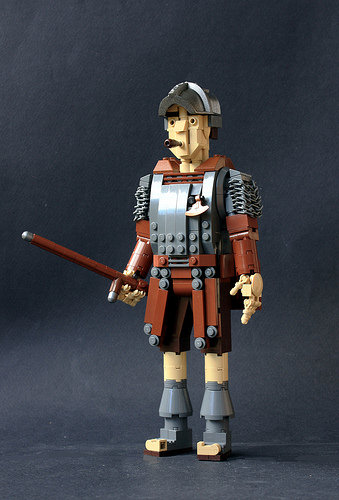 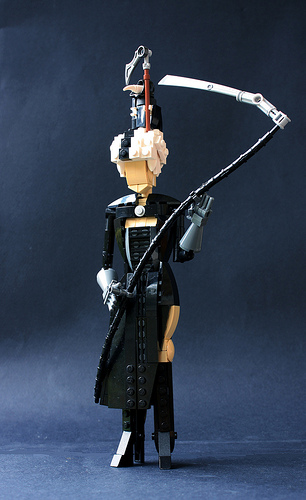 Now that Finnish builder Eero “Pate-keetongu” Okkonen has completed his LEGO Discworld characters (well, completed them for the moment, he happily admits), TBB asked him a few questions about the experience:

TBB: What was the hardest aspect of a Discworld character to capture in LEGO?

Eero: Probably the Librarian‘s shapes and proportions, especially with my limited dark orange collection. The Dean‘s leather coat’s text “DEAN – BORN TO RUNE” was tricky too. Most of the MOC was built simply around it, as it set the scale for it.

TBB: Did you have a moment of “Eureka” when a particularly odd part just seemed to fit?

Eero: The Librarian‘s face, definitely. It took lot of shaping, but came out surprisingly fast in night-time, two or three hours. I tried all sorts of odd parts to capture his rubbery baggy face. The minifig arms connected to the hip piece were going to be used as the brow but they ended up in the lower jaw instead. The handlebar piece had the most important “Eureka” moment here, as it made a great upper lip and framed the eyes. It also made it possible to move the yellow teeth a bit forward, giving a bit less human-like and more orangutan-like overall shape to the face.

TBB: How much time does it take to complete a build? Do you revisit for improvements before you are satisfied?

Eero: The time taken differs… But I think I am quite fast builder. These usually have taken something like six hours each, some less, some more. Ridcully, who was the first one built, was done in a weekend shortly after Sir Terry’s death in March and it took a bit more; I somehow found the legs challenging as most of my character builds usually have longer cloaks. Rincewind, on the other hand, took a lot less. His facial features took some shaping and SNOT work, but everything else came together in hour or two, the shaping being very simple here. I always revisit my old creations, but usually after they are photographed and posted online. You may notice, for example, that Ridcully’s sleeves are different on recent group shots, compared to the original photos taken half a year ago.

TBB: Who is your personal favourite Discworld character in LEGO?

Eero: Well, Mustrum Ridcully is my overall favorite Discworld character, so he has always a special place in my heart. But I’m also very happy how Sam Vimes turned out. I think I really captured the ‘Vimesy’ feel on his face shapes and rusty colors.

While you can see Eero’s builds on his Flickr page, there are lots more photographs, thoughts about the builds, parts used and the illustrations that inspired them on his personal blog, Cyclopic Bricks.