I’ve been following the recent builds of Thomas of Tortuga with interest and expressing little yelps of delight whenever a new creation pops up. He’s embroiled in a Flickr-based LEGO wargame called Divide And Conquer which I’m not even going to pretend to understand. However, the creations he’s putting together to represent his fictional nation’s military are fantastic. I particularly liked these armored tractor tank things… 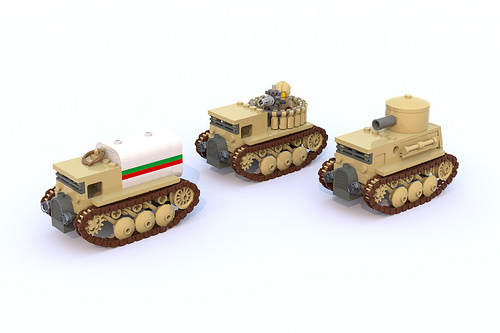 I must admit to a certain ambivalence about rendered LEGO creations – I generally like to see builders put bits of plastic together in the real world. And I’m a firm believer that restrictions on quantity and color drive creativity, pushing builders to develop new techniques. However, these vehicles are absolute class, and I figured I’d let the handful of “impossibly colored” parts slide this time. (Those are pieces which LEGO has never produced in that particular color. But digital parts, of course, can be any color.)

The rest of Thomas’ photostream is stuffed with similarly cool and slightly steampunk military creations – well worth checking out. I’m loving his series of naval vessels (especially this dreadnought), although again some of the “impossible part” use does make me twitchy.

I know some people say rendering isn’t “LEGO building” at all. I’m not sure I’d go that far, and builders like Thomas are making me pay more attention to rendered works. I reckon LEGO creativity shines through, regardless of medium. What do you think?