I don’t buy much retail brand LEGO, but I made an exception for LEGO Ideas 21301 Birds which was released earlier this year. Hec, I even built all the models, rather than just stripping the set for parts!

There are a couple of things I love about this set (other than the models themselves, based on designs by British builder and bird enthusiast Thomas Poulsom). Firstly, the set gives LEGO’s larger audience a taste of some styles and techniques that are normally the preserve of die-hard builders. Secondly, this set is overflowing with plates! As a sculptoral builder I get little value out of most retail sets because they contain so many specialized parts. And while Creator buckets offer a more generic selection of parts, they usually focus on bricks, and less on plates.

In the LEGO fan community there is a tradition of creating “alternate” models from the parts in one set. And for many sets it’s a challenge to come up with good alternates. But the Birds set makes this so easy that I was able to come up with a collection of alternate models, that even adhere to the theme of the original set. Enjoy… 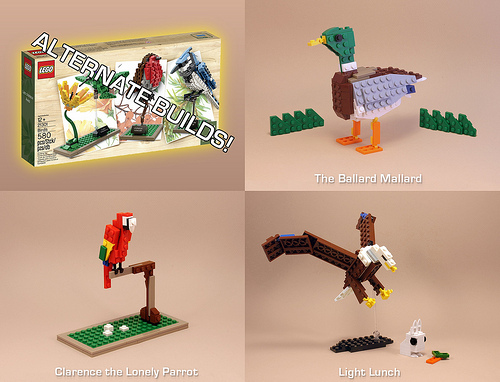 Fans of Thomas’ original bird designs will be excited to learn that next March he will be releasing a book entitled Birds from Bricks that features 15 entirely new LEGO birds, complete with building instructions. Pre-order it now!