It is 1965, and we have been transported to Leba launch site in Poland where Karwick  has a Meteor 1 research rocket ready to launch. 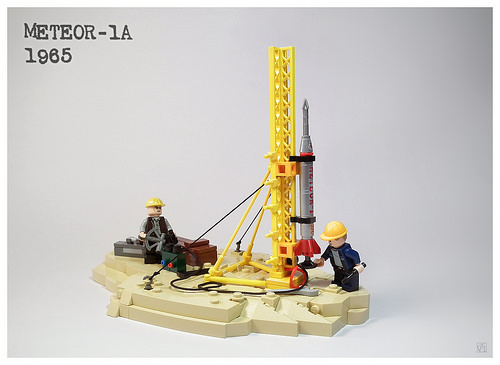 Meteor-1A was a one stage ‘sounding rocket’ that would supply valuable meteorological and rocket technical data during its sub-orbital flight. The launch site for the Meteor series of rockets was Leba, Poland between 1963 and 1974.

The details on this yellow launching gantry are fantastic, especially the use of yellow minifig hands and pirate hooks to hold the guide wires in place!  The coloured hose details on the detonator box are perfect and the silver rocket is adorable (if rockets can be adorable).

Not satisfied with a sub-orbital launch, in 1970, the Meteor 2 was launched from Leba and touched the boundary of the Earth’s atmosphere into space at an altitude of 100km. Karwik’s Meteor 2 is bigger, better, chromed and has a fantastic gantry that includes a loading buggy on rails. 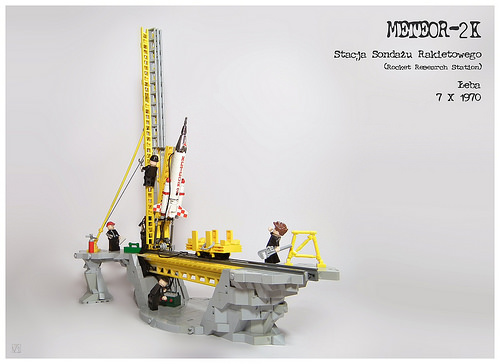 A series of photographs providing a 360º view of the launch site of Karwick’s can be seen on Flickr.