When Luke Hutchinson burst on the scene, he seemed to single-handedly reinvent how LEGO Castle should look. His creations introduced a level of detail, weathering effects, and off-the-grid angling unlike anyone else’s builds. I was lucky enough to see some of Luke’s stuff “in the brick” at the Great Western Brick Show in the UK a couple of years ago — it’s even better in real life than in pictures. 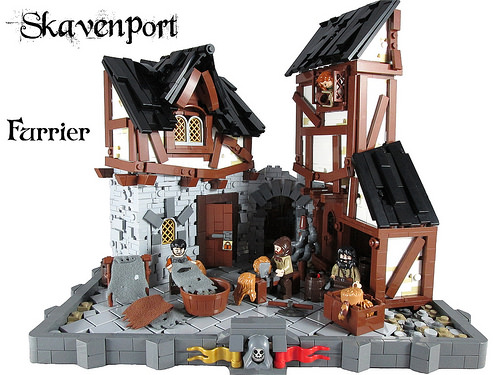 The style has rapidly become something of a standard for Castle, and for me, it now takes something special to catch my eye. This lovely build by Jacob Nion did exactly that. Jacob brings us a furrier’s yard – the latest in a great model series of Skaventown, a fantasy town with a mixed population of humans and the Skaven, Warhammer gaming’s rat people.

Aside from the obvious fun usage of hair, hats and capes as furs, what I like here is the feel of actual work being underway. All too often Castle scenes look over-posed and artificial, the figures little more than dressing for the buildings. As for Jacob’s buildings, the roofing and woodwork are excellent, and are set atop walls which actually look like weathered stone, rather than an emptying out of the builder’s brick bins.

Too often a desire for texture and detail can end in a messy creation, the eye pulled this way and that by unnecessary clutter. It’s a tricky balance, but I reckon Jacob has nailed it. What do you think?