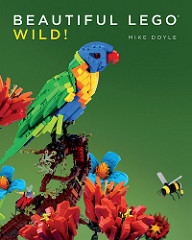 Beautiful LEGO: Wild! is the third title in a series of best-selling coffee table books by Mike Doyle. Like its predecessors Beautiful LEGO and Beautiful LEGO 2: Dark, this edition features a carefully curated collection of LEGO creations by some of the community’s top builders.

Compared to its hefty hard-backed cousin DARK, this slimmer book is more reminiscent of the original Beautiful LEGO. Like DARK, its builder profiles are kept to a minimum and the focus is squarely on the photographs. Otherwise the format is the same, with images organized into categories and carefully labelled with info such as title, builder, year and part count.

To differentiate each new volume from the last, Mike has chosen to assign them over-arching themes. And while DARK was ambiguous enough to allow for a pretty diverse range of builds, WILD is necessarily more constrained to subject matter in some way related to plants, animals or nature. And since it doesn’t feature any of the nature-themed builds already used in the first two books, sections like the ones on bugs and dragons end up relying on some slightly less polished builds than readers of the earlier books might be used to seeing. 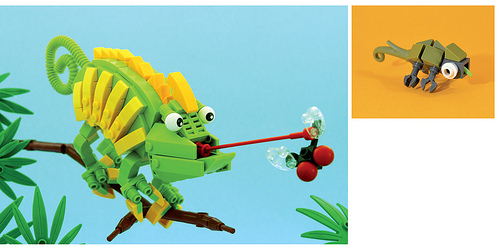 Nevertheless, there are some great wildlife pieces here, ranging from the scientifically accurate to the downright whimsical. I definitely found myself flipping faster through sections that dealt with narrow topics such as horses or flowers, and the lengthy chapter on trees became very tedious very quickly. The strict clustering of related images also means that in some places you might find yourself looking at 3 apples or 4 venus flytraps on the same page, at which point it feels more like a catalogue than something you might casually flip through hoping to be surprised.

This was more than made up for though by some very strong chapters, such as “Creatures with Character” and “Raining Cats & Dogs”. There are also sections featuring architectural and robotic creations with strongly naturalistic elements, that seem to fit the book’s theme very well, and should be real eye-openers for non-AFOL readers. The book also features the gigantic pixelated works of Sean Kenney, which while similar to what you might see at any LEGOLAND theme park, are nevertheless impressive and colorful.

Overall, WILD stands up pretty well to its forebears, and any one of them on its own is guaranteed to entertain AFOLs and ‘regular’ LEGO fans alike. And although this newest addition to the series lacks the obvious “3” in its title, it seems strangely appropriate to compare them to the Star Wars original trilogy, with DARK being Empire, and WILD being Jedi. :-)

So are these books enhanced by giving each one a defining theme, or not? It’s hard to say. But given the success of the original book, and the stand-alone nature of all three, I think it would have been fine to just number them and dispense with themes entirely. But I do hope Mike continues the series, and will be intrigued to see what angles (if any) he chooses for future volumes. They have already proved to be a great vehicle for exposing our quirky little world of LEGO fandom to a much broader audience, and I’m all for that!