One of everyone’s favorite vehicles from the trailers for Star Wars: The Force Awakens is the speeder that shoots across the sands of Tatooine in front of the crashed Star Destroyer. Fortunately then for all of us, 75099 Rey’s Speeder is one of the first wave of LEGO sets from The Force Awakens released today in advance of the movie’s opening in December. I picked up a copy at my local LEGO Store, and here’s a brief review — it is, after all, the smallest of the new Star Wars sets at $19.99 and 193 pieces. 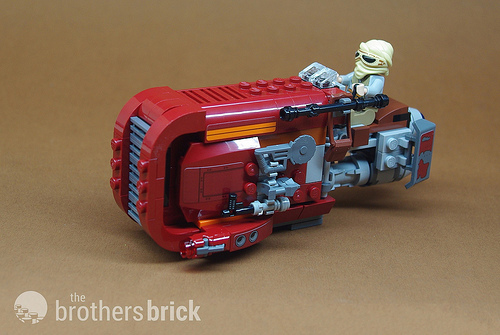 Nearly the entire speeder is built studs out, with brackets and headlight bricks aplenty. You start with a plate and essentially build around an empty space in the interior surrounded by studs facing out, then add on various sub-modules. There aren’t really too many surprises or innovations here in terms of building techniques, but the amount of SNOT (studs not on top) construction is a bit different for such a small model targeted at the 5-12 crowd.

With all the curves and the studs-out construction, the LEGO version of Rey’s speeder seems to accurately capture the look of the vehicle in the movie (at least as far as we’ve seen so far). It also has a nice heft in the hand, and doesn’t feel as flimsy as many of the speeder bikes and even landspeeders released previously. 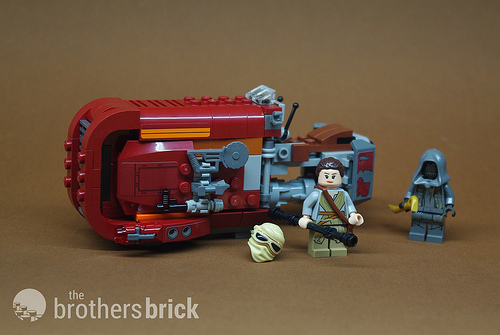 I’ve been disappointed for 30 years that LEGO sets include sticker sheets rather than printing the details on the parts, but then again lack of printing makes those parts more useful later. I’ll just note that the set includes stickers, point you to my pictures (box art never shows how the stickers actually look on the finished model), and let you judge for yourself.

Despite its small size, the speeder has a couple interesting play features as well. Naturally, the speeder sports a couple of the stud-flingers so prevalent in sets these days. More interestingly, by turning the lower engine exhaust, a Technic cam spins left and right and pushes open doors in the sides of the speeder to reveal the engine and an interior compartment. 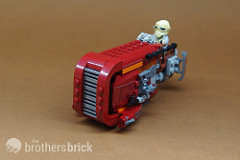 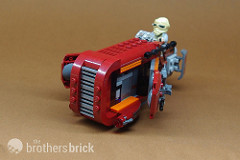 The interior space holds a little container. Scrutinizing screen caps from the trailer, I’m not sure that the real thing actually opens up like this… 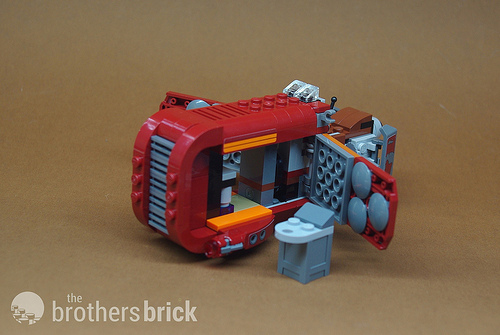 The “real” speeder in the movie doesn’t seem to have a bunch of greebles stuck to the side of the vehicle, so I can only assume that the tools attached there on the LEGO version are actually tools. While building, I thought they were pretty cool greebles, and was somewhat disappointed that the right side not shown on the box was completely bare, but in looking at screen captures online this evening it seems that the random tools on the left side are the “inaccurate” bits. Given that, I would have preferred a smooth surface rather than a recessed surface with a bunch of studs — it just looks like it’s missing something. 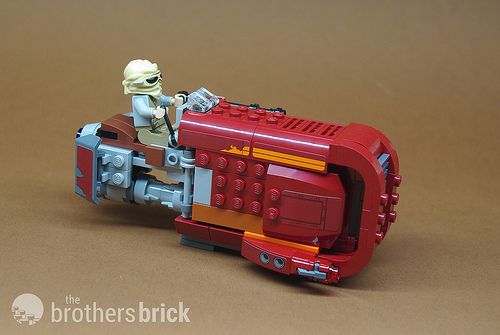 The set includes the titular Rey along with a villainous fellow in a hood. Rey has a bag and carries a staff, while the gray dude wields a golden crowbar. I reserve judgment on him until I see the movie. Rey has a double-sided head, and the set includes both a really cool hairpiece as well as a hood that is sure to make the post-apoc boys salivate. The head of Unkar’s thug also looks like it came from Fallout or something. 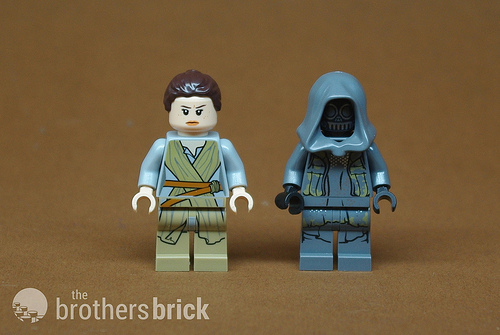 Both figs are printed on the back, and the torso and leg designs should work well not just with sci-fi builds like ApocaLEGO but also in a medieval or LEGO Castle context as well. 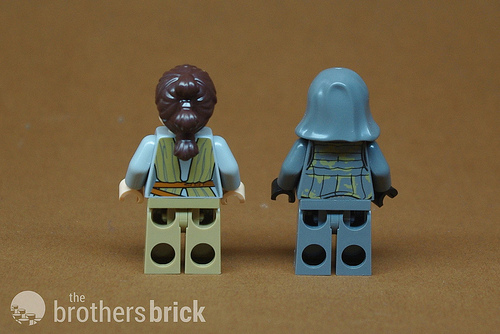 At two minifigs and 193 pieces for $19.99 (here in the US), the set is actually a pretty good value, I think, but every builder has his or her own preferences for licensed sets like this, so I won’t dwell on price for too long.

Most of the speeder is dark red, with lots of useful curved pieces, while the interior uses lots of brackets as noted earlier. The “chrome” bits of the model, like the grill on the front, are pearl silver.

The set certainly isn’t perfect, but for both the figs and all that dark red in useful shapes, I think there’s value for the money, and I certainly don’t regret my purchase today. In fact, I’d ordered one online first thing in the morning before I went to lunch near a LEGO Store and picked one up, so the one that arrives on Sunday will be guiltlessly parted out.

You can help support reviews like this here on The Brothers Brick by buying 75099 Rey’s Speeder from Amazon.com or LEGO Shop Online.