As the grandson of an American World War II veteran who was born and raised in Japan, I have a rather complicated relationship with the Pacific War in World War II. From Nanjing to Bataan, there’s no denying the atrocities committed by the Imperial Japanese military against both the peoples of fellow Asian nations as well as Allied prisoners of war, and yet I feel deep sympathy for the genuine suffering that the people of Japan experienced themselves — from the firebombing of my hometown Tokyo to burning Okinawan civilians alive as they hid in caves. The end of World War II could not come soon enough, and Japan’s surrender ensured that my GI grandfather did did not get shipped from Hawaii across the Pacific to participate in the invasion of the Japanese home islands.

To commemorate this important event 70 years ago today, Dan Siskind has built the American battleship USS Missouri, which was the venue in Tokyo Harbor for Japan’s surrender. At 26 feet long, Dan’s “Mighty Mo” is the largest LEGO warship ever made (four feet longer than Jumpei Mitsui’s Yamato). 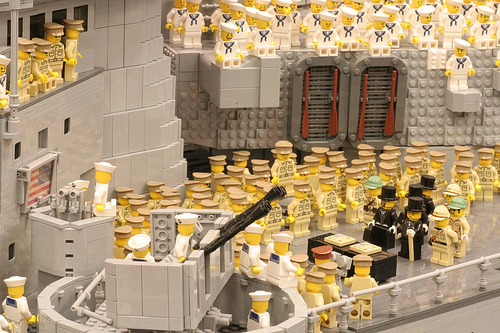 This giant LEGO battleship dwarfs the room it’s currently housed in at the Mall of America in Bloomington, Minnesota. 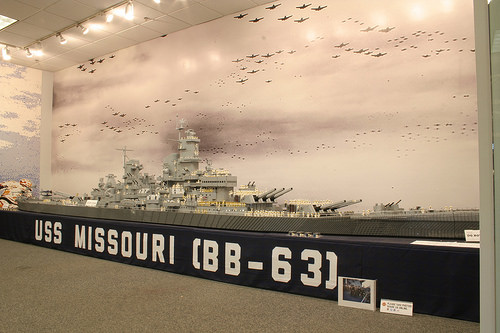 You can see more photos, including lots of work-in-progress shots, in Dan’s “USS Missouri Project” photoset on Flickr.