Last July, the LEGO Wall-E designed by Pixar director/animator Angus MacLane achieved 10,000 votes on LEGO Ideas, and its approval as an upcoming official set was announced in February. LEGO officially unveiled the set just yesterday, but thanks to the good people of Billund, we already have a copy of the set for a hands on review! 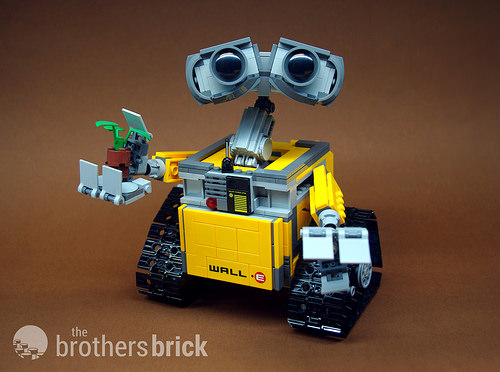 Spoiler alert: Wall•E is a a fantastic model with some great building techniques, lots of parts in an unusual color, and quite a good value for the money. I expect strong popularity from the subject matter alone, so I strongly recommend you pick up your LEGO Wall•E while supplies last.

LEGO Ideas sets (and LEGO CUUSOO sets before them) come in sturdy boxes with substantial, perfect-bound instruction books, and Wall•E is no different. The instruction book is a hefty 127 pages, with a blurb about Wall•E and a nice bio of Angus in the front. However, unlike many other LEGO Ideas booklets, it’s not bulked up with lengthy interviews with the in-house designer who worked with the builder. (On the other hand, the copy of the booklet I received from Denmark is only in English, with a note on the cover to read it in other languages online.) 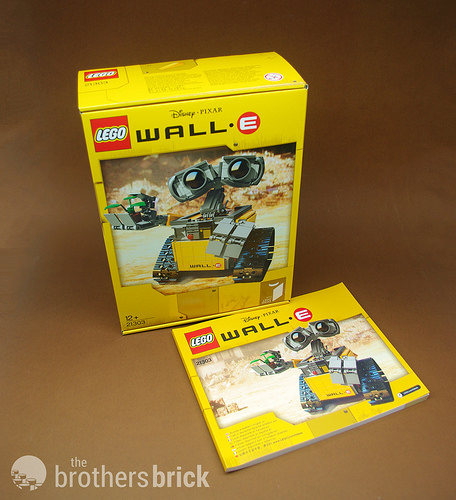 What all this means is that the booklet is full of actual instructions — a good indication of both the high number of parts in the set and the complexity of the build. That said, the instructions themselves are very clear, and I would expect anybody with more than a couple of years’ experience building with LEGO to be able to follow along just fine (though the set is recommended for 12+).

Like Pete Reid’s Exo-Suit, Angus’s Wall•E is first and foremost a model designed by an adult LEGO builder. While the techniques that the final set uses are still “legal” (the in-house rules that LEGO set designers must abide by, including guidelines such as avoiding connections that stress bricks), the set still includes techniques I’ve never encountered in an official set.

But at first, Wall•E is a fairly plain yellow (albeit the rare bright light orange!) box. For the first thirty or forty steps, the most interesting technique is the diagonal seam up Wall•E’s sides, with a bit of simple SNOT (Studs Not on Top, or sideways building) via brackets on the front and back.

Things get interesting when you start building Wall•E’s arms. If you remember the movie, Wall•E’s job is to load trash into his square compartment and compress it. To do that, Wall•E needs to pull the garbage with his hands. Leaving no functional detail out, Angus designed his LEGO Wall•E so that the arms slide back and forth on a Technic axle rail, with rubber axle connectors and System tiles for stability. 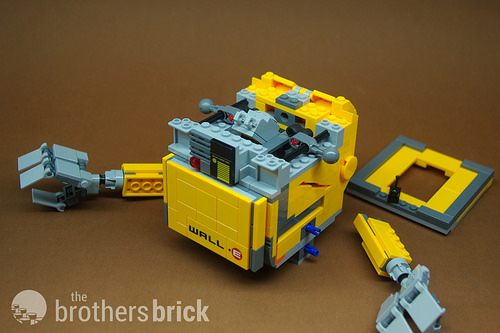 After finishing Wall•E’s boxy body, you move on to his tracks, which are built from pure Technic. I’m not much of a Technic builder, so I’ll just note that they look much like the real thing as well as Angus’s original LEGO designs.

Wall•E’s neck extends up through a hole in his body, and includes some interesting techniques, including jumper plates attached by their stud to Technic axle holes.

The stars of the whole show, so to speak, are of course Wall•E’s incredibly expressive eyes . Of all the places in this set, this is where Angus’s prowess as a builder also shines through the most. Sparing no expense on parts or detail, each eye includes multiple instances of half-stud-offset, along with SNOT of every sort every which way (steps 109-155, if that’s any indication of their complexity).

I really enjoyed the build — not just seeing one of my favorite animated characters come to life in my hands, but also learning some new stud geometries along the way.

Are you really buying LEGO Wall•E just to part him out?

Okay, well, actually, at $49.99 for 677 parts, the set is really a pretty good value. And with nearly 170 of those pieces in bright light orange (not plain yellow, as in Angus’s original designs), you’re getting a solid chunk of useful pieces in a fairly unusual color. Unfortunately, there’s some minor inconsistency in the color of the bricks. A member of the LEGO Quality team from Billund has shared in the past that yellow is a particularly hard color to dye consistently, but the small variation in color is still disappointing.

One of the things I’ve been impressed about the LEGO CUUSOO/Ideas sets is that most of them have included printed rather than stickered parts. Wall•E’s charge gauge (2×2), “WALL” (2×4) and “•E” (2×2) are all printed tiles.

And with lots of great functional connections, curved pieces, and Technic bits, I can easily envision an alt-build spaceship constructed from Wall•E’s parts, as well as any number of construction vehicles (which makes sense, given Wall•E’s industrial design).

So I guess so — go buy yourself a second Wall•E and part him out. Build something cool.

Short of treads that fold up under himself (and talking), I think Angus’s LEGO Wall•E does pretty much what the “real” Wall•E can do in the movie. 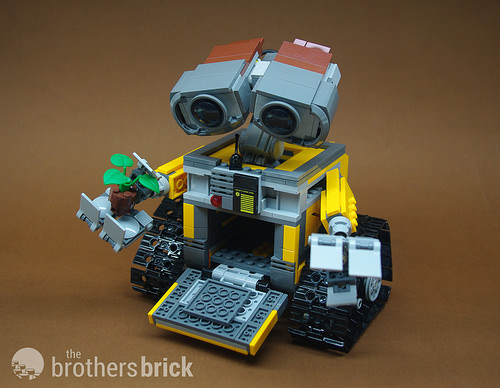 My only complaint, such as it is, is that Wall•E’s head swivels a little loosely on the Technic friction pin that attaches it to his neck. But by angling the head level on the neck, the way it’s shown on the box and in the instructions, there really isn’t much of an issue at all — you can turn those expressive eyes wherever you want them to gaze. 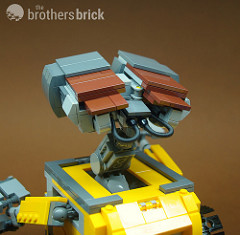 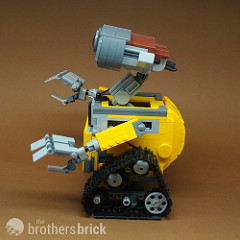 Speaking of the neck, I’ve heard some feedback that Wall•E’s neck should be yellow as well. Angus tells me that Wall•E’s neck in the movie is indeed gray/steel, though rather rusted, and it just reflects some of his yellow body color. Angus also shared that LEGO Wall•E is designed to look “factory fresh” (which is another reason why the neck is gray). In Angus’s words, “If you give him a yellow neck, he’d look like he was wearing a turtleneck.” Since Angus was the Lead Animator for Wall•E, I’m convinced, so let’s move on.

In addition to Wall•E himself, the set includes a four-piece plant (mildly disappointing if you’re expecting a cute little boot) and two-piece Hal (the cockroach, and an amusing surprise when you figure out what the two seemingly random parts attached to Wall•E are supposed to be).

Comparing the final, official set to Angus’s original LEGO Wall•E and the version he ultimately posted to LEGO Ideas reveals that very little changes seem to have been made to Angus’s original Wall•E beyond the length of Wall•E’s neck, minor hand details, and some differences in how tiles have been applied. After a satisfying build, Wall•E is a gorgeous display model with much more functionality than I was expecting. 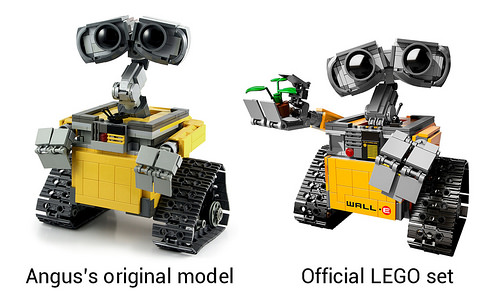 As my friends and family have heard me exclaim over and over for the past few weeks while I’ve waited to reveal this review, Wall•E is awesome!

I was honestly expecting the final model to deviate fairly far from Angus’s original, but that is not the case. At 677 pieces, the model doesn’t skimp on parts, nor detail. Similarly, I was never expecting this much functionality, but Wall•E is fully articulated and just short of fully functional in an industrial capacity.

I’ll readily admit that Wall•E (the movie) is one of my favorite animated films, right up there with Hayao Miyazaki’s best, and I should acknowledge that I’ve had the privilege of knowing Angus MacLane for the last 8 years, but I can wholeheartedly endorse 21303 LEGO Wall•E as an excellent LEGO set from any angle — value, parts selection, play features, display characteristics, and more.

If previous LEGO Ideas sets are any indication, LEGO will probably grossly under-estimate the market for this set, so be prepared for the LEGO Shop website to go down hard the moment the set becomes available (sorry, LEGO Ops guys…), and for them to fly off of shelves at your local store. (But if the Exo-Suit is any indication, LEGO will probably have multiple waves of the set available over time. So don’t be a jerk and hoard this one. We live in a society.)

Whatever reason you need to justify getting yourself your own LEGO Wall•E, I highly recommend doing so. The world needs more adorable, big-hearted robots.

Finally, I’d like to challenge everybody who buys this set to customize Wall•E — build him a red cooler, cover him with rust, make him a nice EVE to keep him company. This set is begging for alt-builds and customization. Starting September 1st, get building!

Wall•E retails for $49.99 in the US, and will be available on September 1st. And don’t miss our original interview with Angus MacLane back in 2008.