Hello minions! Claptrap, everyone’s favorite/most hated robot from the Borderlands game is back again. We’ve featured some fantastic renditions of this iconic character before, from Medium scale to stupidly large-life scale, but I think this build by Davyn (Rifflestein) is my favorite version yet, in adorable minifig scale: 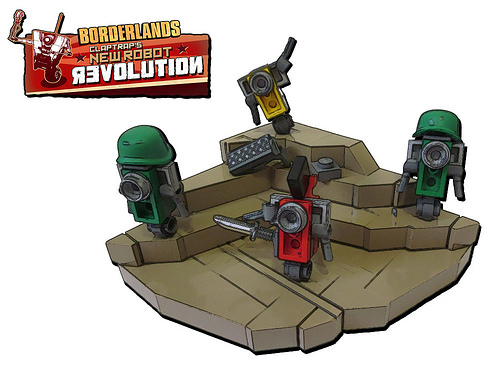 What most readers don’t know is I actually built a minifig scale version of Claptrap, and while there has been times people have based work off of my builds, it’s rare someone like Davyn comes along and basically goes: “I can do way better.”

What resulted was an incredibly well thought out build, using the lamp holder as the wheel, and minifig hands as the entire arm is just perfect. It was also really cool how he presented his build in the same unique cel shading of the game …

… I think I have to go build me a set of these now.