A few weeks ago, Nannan posted The Defense of La Haye Sainte Farm at the Battle of Waterloo. While impressive, this was only a small part of a much larger diorama that was unveiled at Brickfair Va., to commemorate the 200th anniversary of this historic battle. 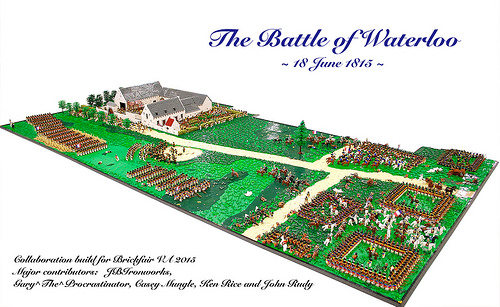 This impressive display was a collaborative effort by Joshua Brooks, his father Gary Brooks (Gary^the^procrastinator) and Casey Mungle, Ken Rice and John Rudy, with further contributions by several more members of Wamalug. It was not only large, but also tremendously well-researched. The formations of figures and their uniforms were chosen to be period-accurate, for instance. The size of the diorama had the consequence that, when sitting at one end and looking at the other, it was impossible to focus your eyes on the whole thing at once. This made the hundreds of sometimes fairly rare minifigures really look like armies on the march. In fact, there were so many figures on this display, that this may be the very reason why some of them have become so rare!

Edit: The guys from Beyond the Brick have posted an interview with Gary at Brickfair, which is well worth checking out.