When, back in 1960, race car driver Paul Frère asked Enzo Ferrari what limited the top speed of his Ferrari 250TR at Le Mans, probably wondering whether the rather large and ungainly windscreen on said car had anything to do with this, Enzo replied that aerodynamics are for people who can’t build engines. 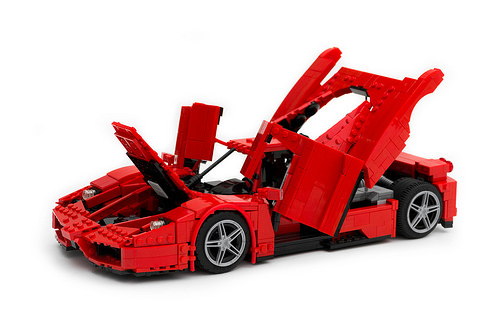 More than 40 years later, the company Ferrari built the Enzo, named after its founder. This car’s shape was undoubtedly designed to be reminiscent of a Formula 1 car, with its V-shaped hood and front air intakes resembling a front wing, but I’m sure the designers spent a lot of time fiddling to get the aerodynamics right. A lot of things have changed since the sixties. Getting the shape of his car right has taken Nathanael L. a fair bit of fiddling too. This is his fourth attempt at building an Enzo and it just keeps getting better. I’m glad he stuck with it. I also think it’s particularly neat that, despite the complexity of its shape, just about everything on the model opens and the engine looks good too.