A slight digression … I’ve been meaning to see the Chappie movie for a while now and finally got around to it last night. And of course like any good builder, I spent an inordinate amount of time during the movie mentally figuring out how I could build him when I got home. I’ve seen a few other LEGO Chappie’s built already, but not a really big detailed one. It would have been my time to shine! And maybe even get blogged!

So I was super stoked to try … I got home, broke out my Dark Blues, got the Orange antennae built and just… gave up. It would have been too large and too complex and too difficult. But thankfully for everyone, Roman (th_squirrel) didn’t give up as easily as I did. Much like Chappie himself, he kept on going and built a super awesome LEGO Chappie: 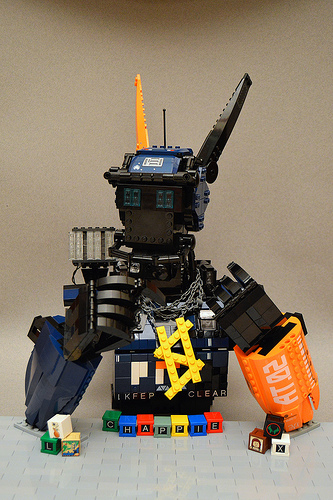 This is just a thing of beauty. I also really love how Roman used pieces with the original stickers on them, it really adds that gangster touch to his LEGO Chappie.