Here at The Brothers Brick, we run the site in our spare time, funded by our loyal readers who support costs like our servers and bandwidth by clicking through from here when you make LEGO Shop and Amazon.com purchases. For months at a time, our servers just hum away happily, until something goes terribly, horribly awry. Since last Thursday, the site has gone down four times, with total downtime of nearly a day. Yikes! 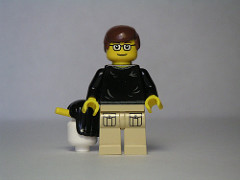 We’re all a little sad about this here at the TBB Compound (especially that pesky Lemur, who gets particularly mopey), but you can help cheer us up by building or drawing something funny that illustrates TBB server problems.

By the way, that’s Linus Torvalds on the right. TBB runs on Linux, Apache, MySQL, and the rest of the usual Open Source stack. Linus invented Linux and named it after himself. I’m pretty sure our downtime isn’t his fault, but I’ll use this minifig of him to illustrate this post anyway.

To enter, submit your photos or artwork to the TBB Server Downtime Contest pool on Flickr. Questions? Ask away here or in the discussions on Flickr…

Here are the prize categories: 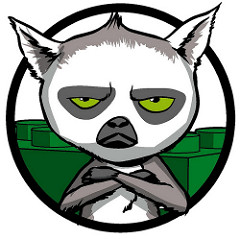 Unlike most LEGO-related contests, we welcome brick-built creations, well-rendered virtual creations, and artwork — if you’ve spotted A. Lemur in the wild, we want to know!

We’ll run the contest through the end of the month, and the top prize will get a LEGO set in the $100 range, to make this worth your while (with more cool prizes for the other two winners).