LEGO has kindly provided The Brothers Brick with a review copy of this set. It is available on Shop At Home and retails for $119.99, and is currently on sale on Amazon for $97.97. The set comes with eight minifigs. 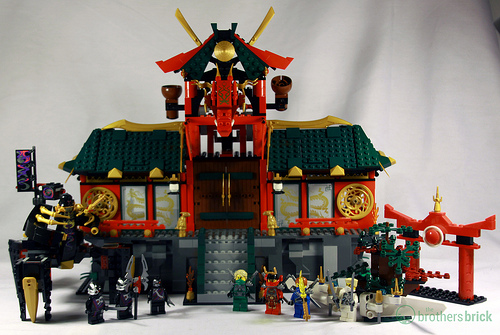 After my experience with Emmett’s Construct-o-Mech, I wasn’t quite sure what to expect with this one. The mech in that set looked so cool but I was disappointed by the lack of playability with the legs that didn’t move. I am pleased to say that was not my experience with the Battle of Ninjago City. It looks cool, and the playability features–while nothing new–work for the most part, and I enjoyed the build.

This behemoth of a set comes with 1,223 pieces spread over 12 bags. I’m used to groups of bags having the same number; in this set, each is individually numbered. The box contains a few loose plates as well. The instructions are in three books, with the second two being full page size. These come in a separate bag along with the stickers, which I did apply during the course of the build.

I do like the design of the stickers that came with this set; like always, I think it’s a pity the bricks weren’t printed. The stickers all have metallic silver or gold on them, which looks particularly nice.

A certain bit of construction in Bag No. 1 hit me with a small bit of nostalgia. I vividly remember talking to my friend, Mike Crowley, when he discovered for himself that five plates high equals two bricks wide. Even though I know there’s no connection here, but seeing that ratio used in the set made me smile and miss him just a little bit more. 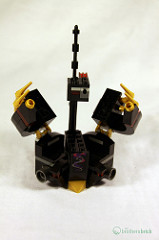 I was a tad disappointed at the end of bag one, with the little black crawler mech thing. It looked awfully sad with no legs, and the area where the evil character sits is severely lacking. There’s nothing there that indicates HOW he’s controlling the little mech. He just sits on the plate. I’m happy to say the addition of legs helped quite a bit (as it should), but the little area for this evil dude remained sad. Not even a cup-holder.

As I worked my way through the bags, each of the smaller builds is completed before starting the bigger building. One of these smaller builds is a glider for a minifigure; I get what they were trying to imply with this glider thing, but I can’t help but view it as entirely impractical. What are you going to do—chuck the katana at your enemy? Even assuming this is a miraculously lightweight glider, the ENTIRE weight is connected at the neck. A trachea just isn’t strong enough to prevent the windpipe from collapsing under all that weight. 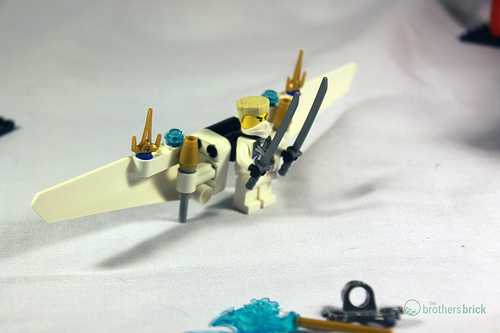 Ooops, sorry. I was applying real-world physics to the Ninjago universe. Sorry!

…I didn’t like the glider. I thought it was silly. Anyway.

I was slightly surprised to see a quality issue with the brown pieces. The arches and the slopes were clearly different colors. The two slopes were the only pieces with the lighter brown color..

I actually liked the construction of the little tree, and the use of hinges to give angle to the leafy bits.

When it comes to the building itself, it reminded me a lot of the older castles, which was nice. It’s pretty straightforward, with the weapons and prison in the basement. There’s a defense mechanism built into the front stairs to pop people off the front door. Useful for solicitors.

I really like the look the printed dragon windows give the building. After applying the stickers in this set, I am happy to report the windows are printed.

I completely admit I giggled when I was building the top floor, as the galley/kitchen area for a while was completely blank with nothing but bottles on the counter. This was before I added the grill, so it looked like a little minibar. Apparently the occupants enjoy happy hour just as much as the rest of us.

In the roof on one side, we have the requisite rubber-tipped missile launcher. The other side provides the only bed for the four occupants, which is right next to a bin which holds discs shot by the tire-launcher. I was disappointed by the tire launcher; it just didn’t work well and I didn’t get a lot of distance when I used it to fire the disks, though I very well could have been doing it wrong. For me it doesn’t do much but add to the parts count. 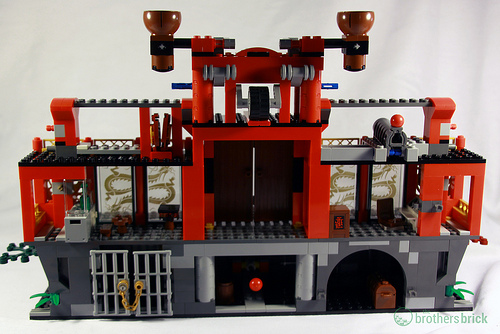 Building the roof was a surprisingly nice experience. The dark green and gold looks lovely and the way the set adds details is effective, like with the oversized blades giving a nice line to the roof. The only let-down here is the decorative dragon head; It looks great head on, but in profile it looks only half-finished. I’d have rather they did a more finished looking design and forgone the tire-launcher.

Overall? I really like the set. It’s fun to build, and it’s a great selection of parts and minifigs, especially if you find yourself short on the katanas. There are 16 in the set. The small things I took issue with aren’t detrimental to how I enjoy the set.

I definitely would say pick this one up. I’d even venture to say that it’s worth the asking price, but if you do find it on sale, don’t pass it up.