For about four years I have been living next to a canal inhabited by crested grebes, gulls, coots and ducks and visited regularly by swans, herons and cormorants. The coots, in particular, are immensely funny. They are reluctant flyers that tend to run across the surface of the water, whilst flapping their seemingly too small wings, instead of actually taking to the air. They are also fiercely territorial and are constantly chasing ducks and other coots away. Their shenanigans put a smile to my face every time. 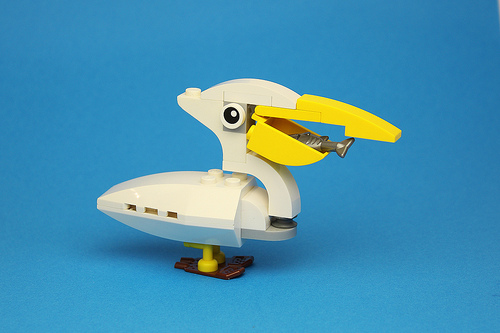 It will come as no surprise then that I also had to smile at the wonderful pelican built by vir-a-cocha. It was built using only twenty pieces, which goes to show that you don’t need an awful lot of parts to build something that has character, as long as two of them are tiles with eyes printed on them. 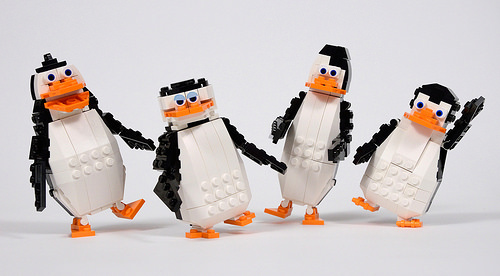 The penguins from Madagascar, built by Peter Dornbach (dornbi), also make good use of said tiles and, inevitably, also made me smile. You can support these on Lego Ideas. Penguins may all seem indistinguishable, but one of the neat things about this wacky foursome is how Peter managed to make each unique and recognisable.