, by Clare Frank, his wife.

Chris posted the first in the series last week. David is planning on having a total of eight models finished in the next six months.

This build depicts The Float, a port-side hotel, which the main characters, Cecily and Daro, frequently stay at when traveling. Just the massive size of this build is impressive but the detail for which David is known shows up all through-out. I love the shingles on the roof, the subtle tudor-styling and the outward projecting walls. The wrap-around deck on the third floor and the overhanging 4th (3rd and half?) floor really gives the building some character. 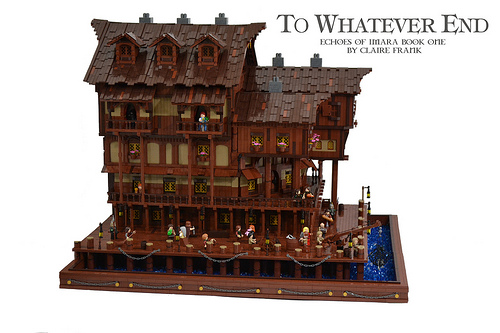 I had the honor of being a beta-reader for the book and I enjoyed it immensely. A fantasy novel, it follows the main characters, veterans of a recent war as well as husband and wife, as they are forced to find their way as a variety of people and events pull at their loyalties and attempt to use them as pawns. The characters are very believable and genuine. I was really pulled into the world and can’t wait for the story to continue. The locations in the story are interesting and unusual. Also the system of magic used in the book is refreshingly unique and doesn’t overwhelm the story or characters, as happens all to often in the fantasy genre. I’m excited for the series to continue but I’m also looking forward to rest of David’s series. David and Clare worked closely on the book, but she did the writing. They are now working closely together to plan these builds, which David is constructing. It’s quite an interesting collaboration!