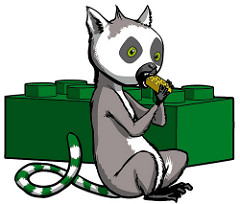 It is I, the TBB Lemur! Here, once again, to answer all those questions about the LEGO fan community that you have been too afraid to ask. There are no stupid questions here.

You know this week was pretty exciting. We got in a truckload of Lemur Loot! I have postcards with my handsome self on them, TBB pins and custom-printed bricks! The gnomes down in the mail department will finally be able to catch up on the backlog. They’ve been sending out some rather nasty memos. Hopefully those will stop now. Not much can give me indigestion but those memos tasted funny. Josh will be contacting the people who have asked the questions that I have answered, to get their addresses. I will personally be signing postcards to each one as well as sending them each a pin and brick. It’s so exciting! I’ve never signed autographs before. The contributors often get mobbed by autograph hounds when they leave the compound but this is a first for me!

How should I go about [running] it so that the LUG meetings don’t drag on and get boring?
The first thing to remember is that LUG (LEGO User Group) meetings aren’t about you. It’s about whatever the entire group wants. Meetings generally get boring and drag on for one of two reasons.

The first is if one person hogs the time and won’t be quiet. I get really hungry when that happens. The second is if no one is talking at all. Find out what your group wants to talk about and figure out some activities that most are interested in. For example, talking about local LEGO Sales and Deals for an hour won’t go over well if no one is planning on buying anything new right away, but it could be really interesting if people have money to spend. It depends on the group.

Personally, I find LUG meetings with agendas and such to be a real downer. I prefer time to talk and catch up, perhaps a “show and tell” time to let people show off the features of whatever creations they have brought and an activity or two. Good activities might be drafting a small set or running a build challenge such as 101 bricks. Just remember to find out what your members want and then do that.

Another thing that helps LUG meetings along is snacks. Lots and lots of snacks.

Why are so many of the Brothers-Brick bloggers adverse to home-done customization (painting and the like) of minifigures?
TBB and it’s contributors aren’t adverse to the cutting, painting and such of minifigs in theory. Iain would probably actually enjoy mutilating minfigs but it would be for all the wrong reasons, so we keep the knives and paint away from him.

The real reason that there aren’t a lot of customization projects posted here is that none of the current contributors is into it. If you aren’t involved in something, it is hard to be a good judge of the quality of what you are looking at. We have had contributors in the past who were experts in the field but they stepped down due to real-life issues.

Josh was just walking by so I asked him about this issue. He agreed and said he respects the hard work that many customizers do but that custom minifigs aren’t really on his radar. He muttered something about “working on that” before he disappeared into the bathroom. Feel free to Flickrmail him about really good custom figs. He needs to expand his radar’s range. He’ll be so excited to get mail from you all!

Do you have actual photographs of yourself or just drawings?
Sorry, only drawings. I’m afraid of cameras. I’ve heard they can steal your vital essence. I can’t live without my essence. I’d probably smell weird. In regards to the drawings, they’ve all been done by Mr. Paul Lee! Isn’t he great? He just sits there, watches me go about my business and sketches away. It was kind of creepy being watched at first, but he’s awesome at making me look good.

Thank you all for your questions! Keep them coming and I’ll do my best to answer them. Don’t forget, we have an entire truckload of lemur loot. It has to go somewhere.

With regards,
A. Lemur