Although I do like the Ecto-1 set and am happy for fellow Brickish member Peter Reid, whose exo-suit got turned into a set, I never cared much about Lego Ideas. However, today LEGO announced the next two ideas that are to be turned into sets and I like both of them.

The first idea is the brainchild of Thomas Poulsom, who by coincidence is also a Brickish member. It is the fantastic Lego birds project.

The set will undoubtedly be a bit different from the submission, but I’m sure the birds will be cute and I can imagine a lot of people finding inspiration in the set to build their own birds. What is not to love?

The second is The Big Bang Theory, by Alatariel and GlenBricker. 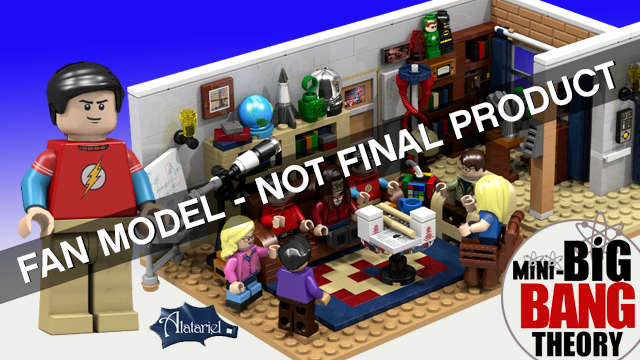 As some of you may know, I have a PhD in physics and when this show first aired the then-girlfriend/ current wife of one of my friends remarked how much Sheldon, Leonard, Rajesh and Howard reminded her of her boyfriend and his circle of friends, including yours truly. We never had the same superhero fetish as the characters in the show and, of course, she is far smarter than Penny, but I cannot deny the similarities. Somewhat worryingly, though, in The Big Bang theory it’s Sheldon who builds with LEGO, referring to his Lego Death Star in a number of episodes. In any case, the submitted model has all the characters and lots of details of Sheldon and Leonard’s apartment and I’d be surprised if the final set won’t include all of the characters as minifigs. Somehow I picture Sheldon’s as wearing a green T-shirt with a classic space logo.