Lego was kind enough to send The Brothers Brick a copy of the upcoming Santa’s Workshop set for review. I was lucky enough to be the one to review the set, and my 3.5 year old son was lucky enough to help. There are plenty of official photos of the set floating around already, including those in our own coverage of the set reveal, so I’ve tried to concentrate my review on interesting things about the set, rather than take a bunch of new photos. This is partially due too the fact that it has been tough to pry the set away from little hands, as my son ran around the house with it screaming about Santa as soon as I opened the shipping box. 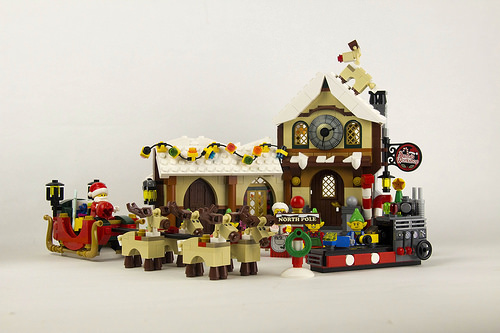 Parts
This set is a virtual smorgasbord of unusual parts, in fascinating colors. The set contains 883 pieces, which is pretty fantastic for a price point of $70. Although I primarily build space and mecha, I can imagine repurposing most parts in this set to my own use. The doors might find themselves languishing for awhile, but that’s balanced out by a huge helping of gold parts. There’s certainly enough gold piping here to outfit a steampunk lab (even the inside of the North Pole sign is a gold lightsaber blade). I was also surprised to see quite a few printed parts for the reindeer (both their faces and backs are printed. I was also rather pleasantly surprised by the number of extras included in the set. There was even a spare cookie! Finally, the set is PACKED with SNOT bricks, it’s almost worthwhile as a parts pack alone.

As with the parts, I was rather happy with the minifigs included in the set. You get Santa, Mrs. Klaus, four elves, and five reindeer. Oddly, Mrs. Klaus and an elf both come with two-sided faces (alternate unhappy faces shown in the photo). The Santa hat is really nice, though I presume it’s the same as the Collectible Minifig Santa, which I don’t have (at least not open). Mrs. Klaus looks like her dress is a new print, and it certainly fits the part. The elves span a variety of personalities, which helps give the set a bit of a Burle Ives Rudolph vibe, which I personally like. Our complement includes “Magic Wand Guy”, and “The Badest Elf There Ever Was.” The latter steals Santa’s cookies.

Speaking of Reinder, though, there are five in the set, four large, and one small. That said, the set doesn’t actually include Rudolph. According the Marcos Bessa, the designer, Rudolph is a character they would’ve had to license. Fortunately, it was easy enough to swap one of the spare Christmas lights onto the small Reindeer’s nose, and Christmas was saved. The Reindeer count has been raised as in issue in my house, so I may have to pick up more of the printed bits on Bricklink, to bring our complement up to the proper eight (plus Rudolph). The tubing used to connect the harness to the sleigh looks long enough to be able to attach at least one more pair of reindeer. “Rudolph” by the way, can apparently even balance on his tail.

The Build
This set was pretty interesting to build. There are some nice SNOT technique used for everything from the Reindeer heads to window construction. It was far beyond my son’s ability to build anything but the minifigs (and repair reindeer), but that’s to be expected. I’m betting that town builders won’t learn much new from building this set, but it’s still a fun build, with a lot of variety. The set is also broken into a series of smaller sections, as most are these days, which allow you to break up the building into discrete chunks, without opening all the bags. There’s also a great little micro-scale Classic-Space ship rolling out of the toy machine, which is marked improvement over the inclusion of another micro scale train for the minifig children to play with.

Overall
This set is a great buy, you get a lot of interesting parts, a lot of useful parts, and some unique animal bits. It was fun to build, and SCREAMS Christmas. If you’ve got kids in your house, it’d be fun to build a chunk at a time, as a build-up to Christmas. It’s surprisingly sturdy for a set in the Creator Expert line, but sleigh can even withstand swooshing by a three year old. It also looks like the two exclusive holiday sets for spending over $99 with LEGO direct this year are annexes to this workshop. I’ve only seen the one available October 1 in the store catalog, but it looks like a little elf workshop that’d match up with the back of this set nicely. The set is available September 17 to VIPs, and October 1 to everyone. I’d recommend waiting until October 1, so you can add something else to your cart, and get the free add-on.