As a child, I was a big fan of LEGO’s Model Team sets of highly detailed and realistic-looking vehicles. It will be no surprise then that I also liked the Classic Beetle LEGO released more than six years ago and that I also bought the Volkswagen Camper van. To my delight, LEGO has now introduced another classic car: the MINI Cooper. 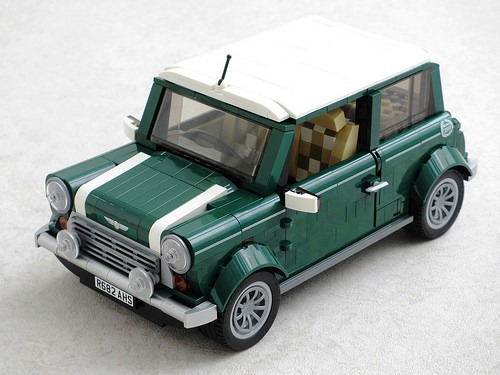 The Mini started life as a humble economy car, but with a lasting legacy. To maximise passenger space within its short body, its engine was transversally mounted and drove the front wheels, which is a configuration copied in pretty much every small family hatchback built since. Sporty versions, called the Cooper and Cooper S, became successful rally racers and celebrities such as Steve McQueen, Paul McCartney, Prince Charles and even Enzo Ferrari owned Minis. From its humble origins, the Mini grew into a cult car, with a particularly British kind of cool.

The vehicle
The set represents a late-model Mini Cooper (produced in late 1997/ early 1998, judging from the license plate) in dark green, with white stripes on the bonnet (hood), white wing mirrors and a white roof. The dark green colour is a close match for traditional British racing green and the colour scheme just screams Mini. The front of the car is spot-on, with the shape of the radiator grille, front-mounted fog lights and the silver bumper pieces. The curved elements used below the windows have neatly-printed thin white lines on them, that run the length of the car. Small details such as the fuel filler cap and indicator lights are nicely represented. Remarkably, for a LEGO set, the finished model is almost completely studless, which suggests that LEGO also hopes to cater to fans of the Mini who may not necessarily be into LEGO. 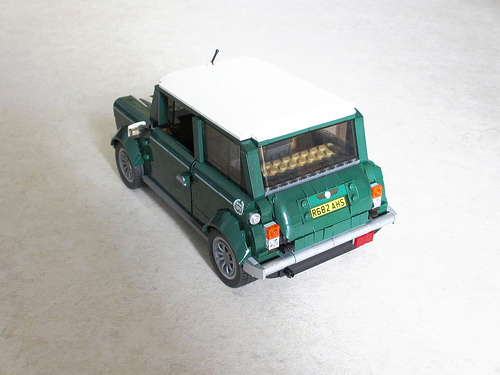 The model is not without faults, however. Especially when seen from behind, it does not look quite round enough. Having built my own models of Minis, I know that both the front and rear windows ought to be curved, but on the model they are built using large flat window panels. I also don’t particularly like the way the pillars supporting the corners of the roof are built, using 75-degree slopes covered with stickers marked with a black triangle. The stickers are intended to make the pillars look narrower, but I don’t think it really works. In fairness, though, alternative solutions would either require completely new part shapes or would add greatly to the complexity, parts count and cost of the set. Despite the compromises, it definitely looks like a Mini.

The chassis of the model is built using plates and traditional studded Technic beams and feels rock-solid. Most of the construction is fairly straightforward, but there are a few really clever features. The one that struck me in particular is the construction required to create a small gap (of half a plate in width) that allows the doors to open easily. Another neat feature is the spare wheel, which neatly fits into a 6x5x1 panel mounted in the bottom of the car and is covered by a hinged panel that also forms the floor of the car’s boot (trunk). The model has fairly wide wheels, with nice wheel covers that look very much like the alloys fitted to the real car. Unfortunately, the front wheels don’t steer and their width, combined with the small clearance around them, suggests that fitting the model with working steering yourself will not be easy. 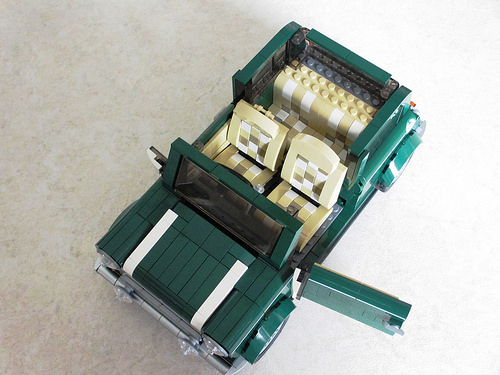 For me, the interior is the highpoint of the model. There is a lot of detail throughout, with a dashboard with a glove compartment (that doesn’t open, however), speakers and a few dials. It is built using brown elements, making it look as though it is covered in wood veneer. The seats have a neat chequered pattern built out of tan, dark tan and white elements. The insides of the doors are covered in tan tiles, adding to the classy look. The interior can be appreciated by removing the roof. This is held on by just a few studs at the back, which allows it to be easily removed. Because of the strength of the chassis, this construction doesn’t seem to weaken the model much. Opening the bonnet (hood) reveals a faithful representation of the engine, including its two carburettors. Besides the previously-mentioned spare wheel, the boot (trunk) houses a pick-nick hamper (with bread, glasses and cheese), a large bottle and a red-and-white cloth pick-nick blanket. I can imagine this is just the sort of stuff people might take with them to a Mini-owners meeting. 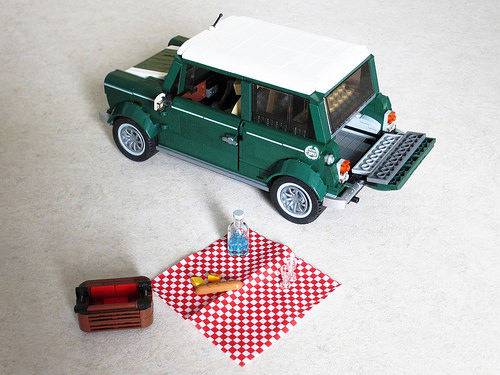 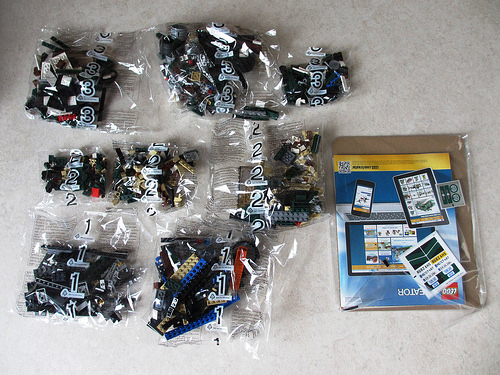 Military builders who like camouflage, in particular, will definitely love this one. It has several elements that previously were not available in dark green, including plate hinges, 1×1 plates and 1×1 bricks with a stud on the side. It also includes a fair few 1×1 tile pieces in dark green and in dark tan. Unlike in the earlier camper van and the Beetle, the parts come in numbered bags, which is a great help when building. The model comes with two sticker sheets with Mini and Mini Cooper logos and license plates to represent either a British registered car (R-reg) or cars registered in Denmark, Germany, Australia or Connecticut. Mini lovers may want to build their own car in a different colour, but this will require a fair bit of creativity, since the elements used for the mudguards and for the curved boot lid (trunk lid) are available in only a handful of colours. 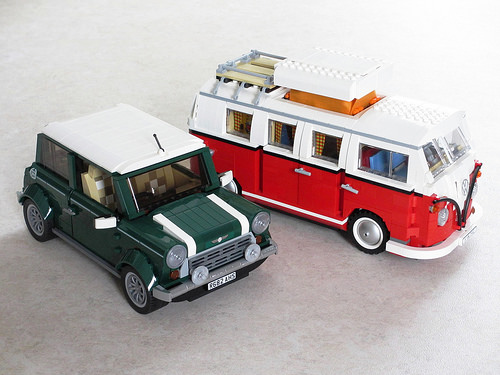 If you like classic cars and Minis in particular, this is a great addition to your collection. It is not built to the same scale as the older camper van or the Beetle, however. Car builders often base the scale of their models on the size of the available wheels and that also seems to be the case for this set. The model is a bit too boxy, but it shows great attention to detail and the colour combination is simply classy. The colour is also the main attraction if you are looking for useful parts for your own builds.

The LEGO Mini Cooper is available from the LEGO Shop online: