BrickCon 2014 is less than two months away — October 2nd through 5th in Seattle. Each year, starting with Zombie Apocafest 2008 and continuing through Big in Japan and Numereji 2421, The Brothers Brick sponsors a collaborative display for our readers. After five continuous years, we took a break last year, but we’re back this year with “ChronoCon 10,000 BC.” 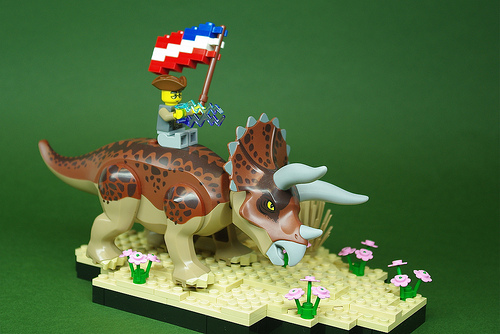 Chaos and anarchy are built into the underlying theme, so please don’t expect a lot of guidelines from us — the whole point is to get creative. We do expect intersecting timelines, anachronisms, and paradoxes, so the parking lot outside the ChronoCon venue will likely have multiple DeLoreans and a variety of TARDISes (bonus points for not arriving in a DeLorean or TARDIS).

That said, we have three very broad guidelines that will help pull the overall display together:

Here are the prize categories (subject to change, addition, and our whim):

There’s a ChronoCon 10,000 BC group on Flickr, where you can see photos we’ve collected so far of LEGO models consistent with the general idea, as well as discussion threads.

If you haven’t registered yet for BrickCon, do it now. And then get building!