Arjan Oudekotte (Konajra) does not post new models all that often, but given the size of most of them, that is understandable and they are always well worth the wait. His latest model is the largest ship he has built to date, with a length of 196 cm (or roughly 6’5 for those of you who prefer antiquated measurement systems) and built out of roughly 32000 elements. 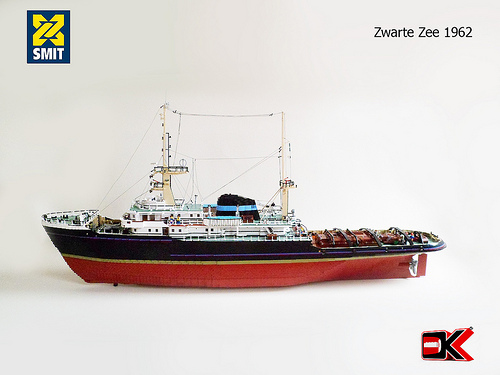 The ship in question is a Dutch ocean-going tug called the Zwarte Zee (Black Sea). The ship was launched in 1962 and until 1984 served with the famous company Smit International, known around the world for large maritime salvage operations. As usual with Arjan’s ships, it is highly detailed and has a beautifully sculpted hull (in dark red, no less). I had the pleasure of seeing this behemoth with my own two eyes last Sunday, but if you want to take in all of it, I encourage you to take a look at Arjan’s album on flickr.