One of the things I’ve loved about Citizen Brick from the first time I encountered their custom minifigs is their sense of humor. Joe and his crew at Citizen Brick make things you’ll never be able to buy in a LEGO set. Yes, you can buy usefully realistic military accessories, too, but they won me over back in 2011 with minifigs like “Botany Enthusiast.” Their latest batch of custom minifigs is titled “Dragon Sword Fighter Force,” which itself is hilarious, much like the over-the-top book series and premium cable TV show that clearly inspired these minifigs (obviously Game of Thrones). 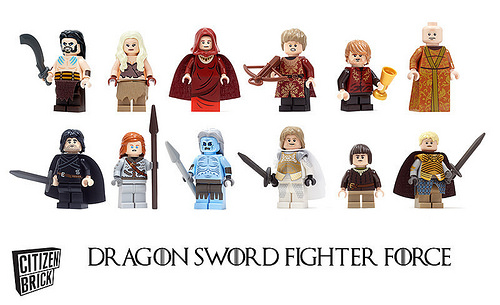 I don’t generally quote ad copy, but the product blurb on the back of the three-minifig blister packs proves my point:

Dragons! Knights! Totally inappropriate family relations! Join the adventure as these brave fighters cross swords with some of the most fearsome foes in the realm. Whether defending their kingdom or clamoring for the crown, these minifigs are ready for a battle royale to the death. Horde the complete series of stunning figs before every character you like is killed off. Your honor is at stake!

Citizen Brick sent me a batch of the “Dragon Sword Fighter Force” minifigs recently, and I wasn’t disappointed. They arrived in three-minifig blister packs with the aforementioned description on the back, plus a 13th bonus minifig of some guy who looks like a fishing boat captain titled “Sir Typesalot” (which you get when you buy all 12 custom minifigs at once).

As amused as I am by Citizen Brick’s subject matter, what keeps me coming back is the quality of their design work. Each custom minifig includes unique printing on nearly every available surface — face/head, torso (both front and back), arms, and legs. Many of the “Dragon Sword Fighter Force” minifigs also come with custom cloth accessories and weapons. The printing is indistinguishable from the printing on official LEGO minifigs, and the designs themselves don’t feel out of place from the world of LEGO (thus the big disclaimer, I suppose).

At $55 for a three-minifig pack or $220 for the full set of 12 (which also includes the George R.R. Martin-esque author minifig), these aren’t inexpensive, and I suspect they’re not the sort of minifigs you’d just fold into your Castle/medieval collection for use in a crowded display at a convention. No, these are serious collectibles for the dedicated A Song of Ice and Fire fan. That said, they are certainly wonderful Castle/medieval minifigs, and I’m sure we’ll be seeing some of the cool parts from these figs on “hero” minifigs quite a lot (I just wouldn’t bury them in an army). Citizen Brick minifigs range from $15 to $25 (these are $16-18 depending on whether you get the three-packs separately or buy the whole set at once), so prices are well within the range of what other vendors are charging for custom minifigs.

Now that so many vendors are producing custom-printed minifig elements at reasonably high quality, the distinguishing factors boil down to subject matter, design, and price rather than just availability and quality. Since price and quality are now somewhat less of a comparative factor, what continues to distinguish Citizen Brick minifigs is their often-humurous subject matter and consistently great design.

Although a bit on the pricey side as a complete set, I can definitely recommend Citizen Brick’s “Dragon Sword Fighter Force” minifigs to every Game of Thrones fan out there, because we certainly won’t be seeing an official LEGO Game of Thrones Collectible Minifigures series anytime soon.